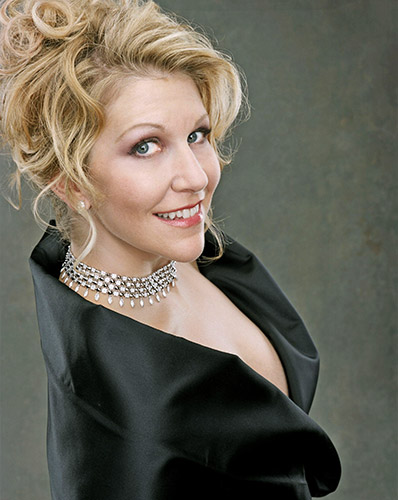 The hugely charismatic and beloved mezzo Joyce Di Donato packed Jordan Hall on Friday night with her fans, old and new, as part of the cross-country charm tour of her new show (and CD) “Songplay.” She was welcomed like a conquering heroine in her Celebrity Series debut, and extended this welcome, one at a time, to her five distinguished instrumental guests as they arrived on stage for a portrait of camaraderie and musical fun. Which was not, mind you, because of the familiarity of the songs, but because of their often-radical re-imaginings from their classical origins (“where what we do is so holy in a way”) and transplanted into the more laid back, sexy world of jazzy improvisation.

Di Donato’s journey to the world of “Songplay” began when she was a quite young. Like most other voice students, she had to study the frequent bane of a vocalist’s early existence, the 24 Italian Songs, a yellow-bound introduction to Baroque and Classical repertoire. Now, decades later, able to do precisely what she wishes to do, Di Donato chose to release herself from the “artistic straitjacket” of purely classical music and to have some fun with old friends, both human and musical. Unbound from her usual restraints, she is entertaining and charismatic. The audience loved her. Di Donato’s journey back to the 24 Italian songs is moving, and initially very funny, as she imitates what she imagines she sounded like when she first sang Tomasso Giordani’s “Caro mio ben.” When her superb pianist, Craig Terry, put the idea into her head of improvising, or playing these (and other) songs, she pointed out that in the Baroque Era, singers (and instrumentalists) were, of course, expected to improvise. From the moment a few years ago that Terry snuck a few jazz chords into a song she was singing, Di Donato was game to do much more. Terry and bassist Chuck Israels deftly arranged the program (and CD), mixing in songs by Giordani, Caccini, Marcello, and Paisiello with tunes from the American Songbook like “Will he like me?”from She Loves Me (Jerry Bock/Sheldon Harnick), “With a Song in My Heart” from Spring is Here (Richard Rodgers/Lorenz Hart), and “I’m Afraid the Masquerade is Over” (Allie Wrubel/Herbert Magidson), along with a heart-wrenching “Solitude” (Duke Ellington).

Hands down, my favorite discovery of the evening was “Lean Away” by Gene Scheer, best known as the librettist for Jake Heggie’s opera Dead Man Walking. What a wonderful song! Joyce DiDonato has curated a winner of a program, and has, with her fabulous colleagues, performed it with great style, charm, and musical magic most of us will doubtless remember long after the concert. I am certain her CD of “Songlay” succeed, but nothing quite equals the thrills of hearing a great diva and band live. Thank you Celebrity Series

Comments Off on Di Donato and Friends Laid-back & Charming