Boston’s Historic Park Street Church made a felicitous decision when it chose Katelyn Emerson for the recital celebrating the near completion of the church’s 1960 Aeolian-Skinner’s full restoration. Last Friday, she tailored her selections to the instrument, keeping her pair of stop-pullers busy making myriad changes of combinations to show off as many different tone-colors as possible. Though the sanctuary’s dryish acoustic (about three-quarters of it is carpeted) may not deliver the ideal ambience for works conceived in and for a cathedral, it does allow smaller details to emerge clearly without unduly vitiating the intended effect. And with images projected onto a large screen hung over the altar, the audience could appreciate the sometimes-acrobatic physical process of organ-playing, though unfortunately, our view did not extend to her feet—perhaps the most intriguing aspect to non-organists. Emerson spoke with poise, enthusiasm, and considerable knowledge about both the works played and this organ’s history.

The first movement of Felix Mendelssohn’s Sonata I set an authoritative and dramatic tone, with the stark contrasts of stormy F minor passages and a gentle chorale-like tune emerging as the “still, small voice of calm.” The chromatic complexities of this large-scale movement, unusually dense for Mendelssohn, emerged clearly and handsomely with no sacrifice of legato or tempo.

The charming Allegretto from Horatio Parker’s 1905 Organ Sonata reflected both the composer’s German training and a soupçon of the French symphonic style, though the sly humor (maximized by Emerson) constituted perhaps a whiff of  America. Delicately piping flutes conversed with a slithery solo reed in Emerson’s compelling interpretation. Parker resided in New Haven where he taught Charles Ives at Yale, but he also served locally as director of music at Trinity Church, Copley Square.

Leo Sowerby (1895-1968) developed a thoroughly American style that exploited the orchestral organ stops popular in the first few decades of the 20th century and he often incorporated jazz-influenced harmonies. His Requiescat in Pace served to display a wide range of colors including string celestes, various flutes, and lovely distant chimes, in an affecting rendition.

A gifted English organist and composer Percy Whitlock (1903-1969) sounds rather more conservative in harmony and rhythm than Sowerby, and his music—reminiscent of “light classics” —has remained popular with performers and audiences. Though the Allegretto from Five Short Pieces (1930) is not his most memorable work, it too affords the organist many opportunities to draw on diverse solo voices as well as ensembles. In fact, Whitlock ultimately created a version of this movement for orchestra.

Mozart wrote the Fantasy in F Minor, K. 608, like all his organ works, for a flute-clock mechanism rather than a human player, but Emerson made no concession to that fact, taking the outer sections of the A-B-A’ form at a vigorous tempo with crisp execution of the many ornaments and the  exciting counterpoint of the fugal sections. The beautiful A-flat major middle section soothed on glistening flute stops. Reminding me of Virgil Fox’s recording of the piece at Symphony Hall, Emerson also emphasized coloration, keeping her registrants nearly as busy as herself thoughout her beguilingly imaginative account.

Although the K. 608 Fantasy, generally thought to be Mozart’s finest organ work, is clearly late 18th-century Classical, it yet contains many nods to the Baroque, most notably its plentiful ornaments (turns and trills) and the rigorous polyphony of the two fugal sections. This paved the way nicely for the succeeding work, J. S. Bach’s Passacaglia (BWV 582), one of the high peaks of the Baroque. The artist here took a more conservative approach, holding a tighter rein on rubato and restricting her registrations to sounds available on early 18th-century instruments. The Passacaglia encompasses a grand set of variations constructed over a repeating pedal sequence and a culminating fugue uniting the continuing pedal theme with two new countersubjects. Emerson achieved variety of dynamics and texture not only with different stop combinations but also differing articulation. Oddly, she took the fugue slightly slower than the preceding variations: though the difference was subtle enough not to break the fugue’s usually inexorable forward momentum, it did slacken marginally. She clearly delineated the thee subjects throughout, and she thundered appropriately at the conclusion. 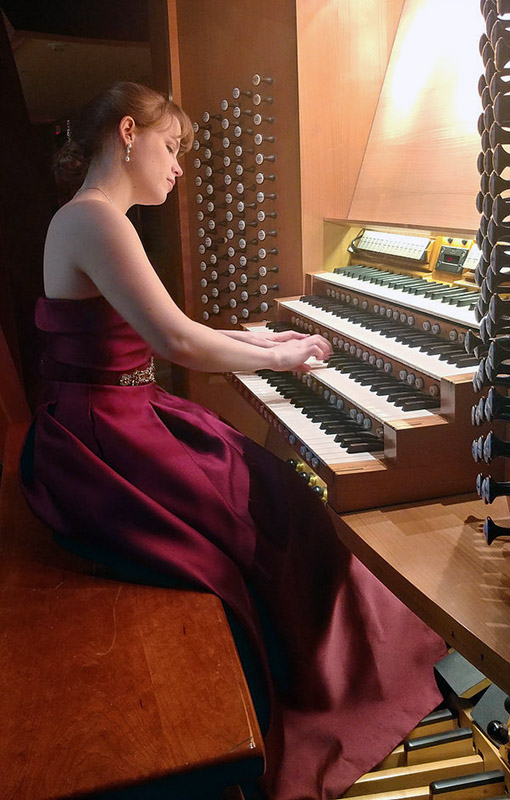 On paper it initially looked peculiar to jump from the earliest piece on the program to the latest, but Emerson made her reason clear quickly in her remarks. J. S. Bach’s six sonatas (generally referred to as “trio sonatas”) include some of the most demanding and rewarding music in his large organ output. These are, in essence, chamber music for the organ, with each hand contributing a voice while both feet play the third line (the bass). While many composers have greatly admired these pieces, only a small number have taken on the challenge of writing similar works. One such was the Parisian organist, composer, and pedagogue Jean Langlais (1907-1991) whose Sonate en trio was completed in 1967 and suggests, rather than inhabits, tonality. The prevailing effect of the first movement, Allegro vivo, was the rapid, delicate staccato pitter-pat evoking raindrops in musical pointillism, as in the artist’s apt description, and we especially enjoyed watching her criss-crossing interplay of hands here. The slow central movement recalled the texture if not the harmonies of Bach’s famous Air on the G String: smoothly legato upper voices over a detached, quasi-pizzicato bass line. The concluding Allegro displayed another spectacle des mains with Emerson’s hands crossing and leapfrogging one another while she maintained the layers of different articulation first heard in the previous movement. All three movements ended with a chuckle when a major diatonic chord abruptly emerged from astringent harmonies.

Stepping back a generation, the performer gave a sparkling rendition of Naïades (Water Nymphs) by Louis Vierne, the titulaire at the glorious organ of Notre Dame de Paris from 1900 till his death (at the console) in 1937. To bring this daunting piece off, the organist must make the runs and arpeggios, first in the right hand then in the left, seem weightless and buoyant. Emerson’s playing was very nearly immaculate and skillfully painted a musical picture of nymphs “flitting over water while singing.” The parallel arpeggios in both hands approaching the end, were dazzling.

The closer, the first movement of Symphony No. 6 in G Minor came from the pen of Vierne’s teacher, Charles-Marie Widor (1844-1937), titulaire of St.-Sulpice and professor at the Paris Conservatoire. This movement has achieved warhorse status for good reason. It is powerfully theatrical, with multiple opportunities to highlight the grandeur of full organ, generate tension with the dramatic juxtaposition of different rhythms, create power and mystery via the swell shades, and of course, display considerable virtuosity. Emerson did all this handily in an electrifying account. Though she has already embarked on graduate organ studies in Germany, it seems safe to say she would be the ideal choice to mark the completion of this fine organ’s restoration.