Among the happily anticipatory full-house at Jordan Hall, I settled into an advantageous seat to hear Alisa Weilerstein’s “heroineiac” Celebrity Series traversal of all six Bach Cello Suites—one of 5 such the artist has scheduled into her hectic 2018-19 season. Composed while Bach was Kapellmeister in Köthen, a town in the middle of the Saxony-Anhalt region of Germany, most likely between 1717 and 1723, and transcribed by his second wife, Anna Magdalena, the suites rested in obscurity until the 20th century. These days intrepid cellists with the requisite mental and physical stamina increasingly play all six in a single span, virtually summitting a Kilimanjaro.

All six examples include the components typical of the dance-like genre—PACSOG, standing for Prelude (considered optional), Allemande, Courante, Sarabande, Other (also optional, typically a Bourrée, Minuet, Gavotte) and a Gigue—yet each stands distinct, with specific challenges, and Weilerstein rose to each, though one could see and nearly feel her tire towards the last (though she never “hit the wall”). Some less hardy souls peeled off at each pause (one short, after the first two suites, one longer after the third and fourth), likely due to dissipating concentration.

Weilerstein programmed the works in chronological order. The first, from its virtually iconic G major Prelude, is somewhat understated, yet rich with contrapuntal writing. Weilerstein delivered it with artistic yet tender reserve; it seemed even more understated than required, but one could not argue with her lively dispatch of the Sarabande or the terminal Gigue.

The moving D Minor Prelude of the Second Suite, with its most approachable melody, rose to one of the finest moments in the altogether excellent evening. It was followed by the Allemande, with its improvisatory moments, then the difficult Courante, which seems hard for anyone to articulate adequately, followed by the Sarabande, with its graceful sadness. The two minuets sounded appropriately subdued, but the intense and spirited Gigue provided a restorative. 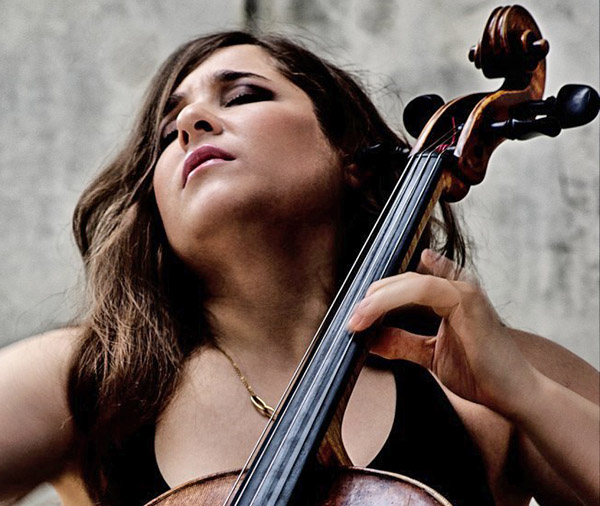 Following a brief pause, Weilerstein sailed into the more upbeat C Major Third Suite, in which second movement Allemande and the nearly too well-known first Bourrée stood out, though she projected the lesser known Bourrée II with appropriate reflectiveness.

By the magnificent E-flat Major Suite 4 with its many octaves, Weilerstein’s playing hinted at fatigue, but her musicality never faltered. She conveyed majesty of the Prelude thoughtfully, and then the the gently sweeping Allemande and the pleasing Courante. She imbued the Sarabande with compassionate attention, and provided incisive Bourrées and Gigue.

After a longer intermission, Weilerstein carried off the unusual 5th and 6th Suites with aplomb, though she increasingly needed to shake out her left hand between movements. The 5th Suite requires scordatura tuning, and the Prelude is really a prelude and fugue, performed poignantly here. This Suite’s Sarabande, unique in having no chords, was touching. She gave the two Gavottes lively attention, and brought complexity and maturity to the Gigue. In all, the 5th Suite seemed to encompass the core of the evening.

The final D Major 6th Suite, high-pitched and intricate, and the longest of the set, takes concentration, given its expansive scale. Bach apparently wrote it for a five-stringed instrument.  Weilerstein managed it with great panache, conquering the wide range of pitch on her four strings.

So many cellists now perform the set in one go that www.jsbachcellosuites.com has run a “best performance” questionnaire and posted it.  And last summer James Liu reviewed cellist Colin Carr’s version at the Shalin Lu in the Intelligencer [HERE]. For so many reasons an evening like this one is both a spectacle and spectacular gift.