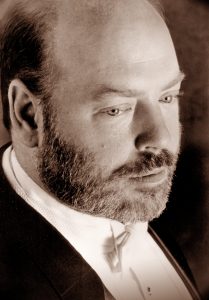 Known to Bostonians as frequent collaborator in director Peter Sellars’s and conductor Craig Smith’s re-imaginings of Mozart’s Cosi fan tutte and Le nozze di Figaro (which also appeared in PBS’s “Great Performances”), for his work as a member of Emmanuel Music, for his longtime collaboration with pianist David Breitman in such works as Schubert’s Die schöne Müllerin, and with the Lydian String Quartet in Fauré’s La bonne chanson, the beloved baritone Sanford Sylvan died yesterday.

Over the years in the Boston Globe, Richard Dyer has often been touched by Sylvan’s accomplishments, once describing how he had:

“…arrived at an accomplishment denied to most professional singers, the art of delivering American English in a completely natural, unaffected and expressive way… without a trace of the opera singer’s…orotund recital delivery; instead there is a confidential, communicative, and even at times imposingly public statement of private feelings. Over the years Sylvan has simplified his performances as his understanding has deepened, and today he is one of America’s master singers.”

His voice took on, “an impact and ring at the top while retaining the lucidity and transparency that have always been its most cherishable characteristics. Sylvan’s ear remains impeccable; his art deepens with every appearance…as the loving, terrified, essentially decent Klinghoffer, [he was] touched by rare spiritual grace.”

Born in New York City in 1953, Sylvan graduated from the Manhattan School of Music. He also studied at the preparatory division of the Juilliard School and at the Tanglewood Music Center.

In the summer of 1994, Sylvan made his debut at the Glyndebourne Festival, performing the role of Leporello in Mozart’s Don Giovanni. Sylvan has participated in the American premiere of Peter Maxwell Davies’s The Lighthouse, the world premiere of Philip Glass’s The Juniper Tree, and a performance at the Proms in London of Michael Tippett’s The Ice Break.

In 1995, Sylvan performed in the Schleswig-Holstein Music Festival, the Ojai Festival, and the Carmel Bach Festival. He also appears annually with the New England Bach Festival under the direction of Blanche Moyse. As a chamber musician, he has sung with the Chamber Music Society of Lincoln Center, on several Music From Marlboro tours, and with the Boston Symphony Chamber Players, with whom he has recorded John Harbison’s Words from Paterson. Sylvan has performed with orchestras throughout the world, including the Cleveland Orchestra, New York Philharmonic, Boston Symphony, San Francisco Symphony, St. Paul Chamber Orchestra, New Jersey Symphony, London Sinfonietta, St. Luke’s Chamber Orchestra, NHK Symphony, and Los Angeles Philharmonic.

Sylvan received five Grammy nominations: Charles Fussell’s Wilde (2009) and John Adams’s The Wound-Dresser (1990), which were written for Sylvan; Fauré’s L’horizon chimérique (1999), Beloved That Pilgrimage (1992), and the soundtrack for the Penny Woolcock film of Adams’s opera, The Death of Klinghoffer (2003). He premiered a number of works by Philip Glass, Peter Maxwell Davies, John Harbison and Christopher Rouse, and performed in Adams’s A Flowering Tree at Lincoln Center’s Mostly Mozart Festival. Perhaps as Zhou Enlai in Adams’s Nixon in China he created his major role.

He served as a professor of voice at the Juilliard School, the McGill University Schulich School of Music, and the Bard Conservatory Graduate Vocal Arts Program. He belonged to the vocal company at the College Light Opera Company.

In 1998, journalist Allan Ulrich profiled him HERE in The Advocate about his commitment to contemporary music, his 1996 wedding to his same-sex partner, and about coming out publicly in the New York Times during an era when that took some bravery.