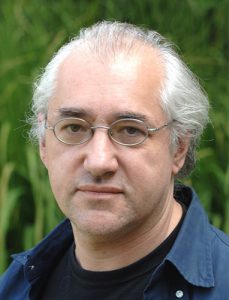 The local musical cosmos will presently be aligning for the eminent and much-awarded American composer Sebastian Currier. He answers our interviewer’s question, “are you getting rather cosmic?” below the break.

Next Saturday, Boston Musica Viva, Currier in attendance, delivers a musical program calling sharp attention to the challenges facing all of us citizens of Earth and featuring the world premiere of his Eleven Moons. Commissioned for BMV and soprano Zorana Sadiq by Chamber Music America, Currier’s work incorporates perspectives from moon-related texts from science, poetry, fiction, religion, and fable. Other pieces at the February 2 BMV concert include Deborah and Richard Cornell’s Wind Driven, a stunning multimedia work on climate change; Brian Robison’s Bonfire of the Civil Liberties, a sardonic look at xenophobia in the name of patriotism and the atrocities at Abu Ghraib; Michael Gandolfi’s Budget Cuts, “a septet for three players and conductor” which takes the arts fiscal squeeze from diminishing public funding to a comical and poignant extreme; and the premiere of Viva!, a bagatelle by Ellen Taaffe Zwilich in honor of BMV’s 50th anniversary.

Two months later, May 2th-4th, Currier’s new violin concerto, Aether, will be premiered by Baiba Skride with the BSO conducted by Andris Nelsons (a co-commission with the Gewandhaus Orchestra). The concerto, too, explores otherworldly concepts. Its four movements are contained within an aura of sound, an aether, which “For much of the 18th and 19th centuries … was thought to be an invisible substance that pervaded all of universe between celestial bodies,” notes Currier, turning 60 next month. As he has had a fruitful collaboration with Anne Sophie Mutter, composing for violin comes naturally; in fact, his third world premiere this spring is a new trio that Mutter will perform at Carnegie Hall. Specifically, March 12th at 8pm Currier’s Ghost Trio is premiered by violinist Mutter, with cellist Daniel Müller-Schott and pianist Lambert Orkis, in Carnegie Hall, and they repeat work March 17th at 3pm in Chicago’s Symphony Center. In April Currier’s 2014 orchestral work Divisions, commemorating World War I, is performed by the Detroit Symphony Orchestra led by Ludovic Morlot (April 12th at 10:45am, April 13th at 8pm, and April 14th at 3pm).

Currier was raised in Providence in a musical family. He received a DMA from Juilliard and taught at Columbia from 1999 to 2007. Among his many honors and awards are the Berlin and Rome prizes, a Guggenheim, a fellowship from the National Endowment for the Arts, an Academy Award from the American Academy of Arts and Letters, and the Grawemeyer Award for Music Composition. He has held residencies at the MacDowell and Yaddo colonies. He was artist in residence at Princeton’s Institute for Advanced Study from 2013 to 2016, which spurred scientific interests. “Eleven Moons is a song cycle based on these many projections we imprint on Earth’s closest neighbor. I have chosen fragments from various texts—including Wikipedia entries, the Upanishads, passages from Shelley, Poe, and the Brothers Grimm, and a quote from Neil Armstrong—all of which I hope will give a sense of the breadth of perspectives from which we view our lovely celestial neighbor.” More biography is available HERE.

BMInt’s publisher goes way back with Sebastian Currier and spoke with him recently.

FLE: In 2003 we first met in the context of the world-premiere performance of your Pulse, which the Harvard Musical Association commissioned on behalf of violist Kim Kashkashian and guitarist Elliott Fisk. As I drove you and your father past the Bunker Hill Monument afterward, he remarked that your forbears had fought there. I went him one better and cited my ancestors who paid for the battle. So with those early American beginnings, why haven’t you produced any Currier and Ives? And which Ives?

SC: Ah, yes! I do remember that moment. But if your question is somehow whether lineage is destiny, then my situation is a little more complicated. Though my father’s family were very early settlers in the Colonies, my mother’s family were Jewish immigrants, who came from Russia after the Revolution. And maybe that does fit for my music — I feel I always try to bring different elements together and have them coexist peacefully side by side. As far as Currier & Ives, you’re not the first to make that reference. But the only time I remember an actual performance that programmed a piece of mine next to a piece of Ives was with Hugh Wolff, though it took place in Leipzig, and not a single German had ever heard of Currier & Ives! Oh well, maybe another time.

I hadn’t heard your music again since Sivan Magen on harp and Itamar Golan played your Night Time in 2017 at HMA. But you’ve been productive in the interim. And there is a performance crescendo happening in the next few months, where in Boston alone we will be getting to hear two major works of yours for the first time. Boston Musica Viva’s The Earth Under Attack on February 2nd opens with your Eleven Moons for soprano and chamber orchestra. When BMV notes that it features an array of humankind’s perspectives in the context of the show title, it somehow suggests War of the Worlds or The Day the Earth Stood Still. Is this a message piece? What does it tell us?

Truthfully, I think they developed the idea after I had already started working on the piece but was still trying to figure out what shape it would take. But to draw some connection, I think the moon has a way of taking us out of the here and now. It makes us think more broadly about the world. I remember once some evening walking up out of the subway and inadvertently staring up to see a full moon shining above the buildings — at the moment I realized that nothing was really the way I thought it was. We get so fixated on our terrestrial reality and so easily forget (probably because we want to!) that we are on a little chunk of rock within an immense, strange and baffling universe. In this way, it can bring us to think about how vulnerable the Earth is. But as I say, I wasn’t really thinking so directly about this. It was more about how we project our desires and fantasies on the moon. There are endless interesting texts about the moon. At one point I almost thought I’d contact BMV and ask if the piece could be an hour long — but then I came to my senses (it’s 20 minutes).

You have a thing with top female violinists. You and Anne Sophie Mutter have advocated much for each other, and indeed this March in New York and Chicago she will debut your Ghost Trio. That piece resonates with passing references to canonical works of Schubert, Beethoven, and Mendelssohn, apparently. What would those composers think?

Yes, I feel so lucky to have had the opportunity to work with ASM over many years now. She’s just so wonderful in every way. And yes, in my piece there are ghosts lurking — in the form of short, fleeting, sometimes obvious, sometimes obscure quotes from a number of major trios from the 19th century. As for your question, well, my guess would be this: Beethoven would be angry, Schubert surprised, Mendelssohn would think it was cool, and Brahms wouldn’t let on what he thought.

Another violinist brings a new work of yours to life in May, as the BSO will be offering your concerto Aether, co-commissioned by the BSO and Leipzig Gewandhaus for Baiba Skride, which is contained within “an atmospheric aura of sound, … aether thought to be an invisible substance that pervaded all of universe between celestial bodies.” Eleven Moons, Ghost, and Aether … are you getting rather cosmic? Is this a stage? early, middle or late Currier?

Who knows? Maybe! Though I think these are strains in my music that can be found in previous works too. I’ve always had an interest in science and wondered if it could become the source of material in musical works in a way analogous to how religious texts have in past brought forth so much amazing vocal music, etc. I have a piece, Night Mass, that directly addresses this. It uses text from the Latin mass but replaces the Credo, the core of belief, with a scientific description of the world, and in doing so replaces certainty with doubt.

I’ve also written a piece I like to think of as a set of intergalactic love songs, called Deep-Sky Objects, with a text by the wonderful writer Sarah Manguso. I’ve also always been drawn to ethereal sound worlds. Quietude and intimacy are very appealing. Part of me would like to write nothing but very quiet, ethereal music — but then the other part of me wouldn’t!

Nelsons and Skride subsequently perform the work at the Gewandhaus Grosser Saal on Thursday, May 16 at 8pm. and Friday, May 17 at 8pm.

Tickets to next month’s concert, priced $20 to $131, are available at the Carnegie Hall Box Office, 154 West 57th Street, or can be charged by calling CarnegieCharge at 212-247-7800 or by visiting the Carnegie Hall website, carnegiehall.org.

*Co-commissioned by the BSO and Leipzig Gewandhaus Orchestra