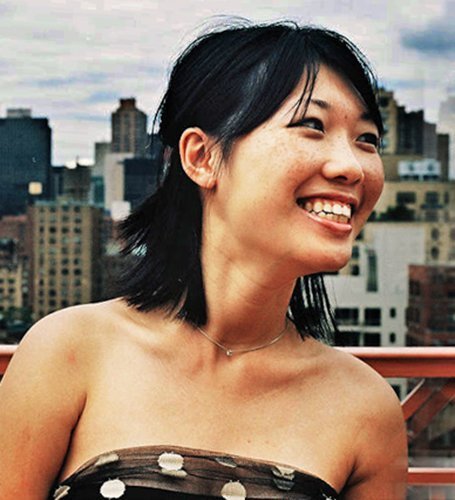 Since their previous joint appearance in concert 108 in the Foundation for Chinese Performing Arts series, esteemed collaborators pianist Helen Huang and violinist Paul Huang (no family relationship) have had five years to accumulate honors studding a deep patina of mastery. Winner of the Young Concert Artist Auditions in 2011, Paul has played with such major institutions as the Mariinsky Orchestra under Gergiev to generally ecstatic reviews. Helen’s bio describes accomplishments in solo and chamber repertoire plus concerto gigs with Berlin and New York phils and the like. Despite these individual credentials under spotlight, Helen and Paul gave plenty of rewarding evidence of their teammate stature last night at Jordan Hall in concert 129 of Cathy Chan’s estimable 30-year-old series.

The elegant pair took to the stage as commanding masters rather than the juveniles on the program cover: Paul in well-cut tuxedo with a crimson pocket square and Helen in an elegant black suit. While she sat straight-backed at the piano, her tone was anything but, and if he rooted himself with expressive dignity, his output belied the controlled appearance.

Dvořák composed the Sonatina in G Major for violin and piano during his sadly short American sojourn. “It is intended for youths (dedicated to my two children), but even grownups, adults, should be able to converse with it …” he wrote publisher Simrock. Its use of Native- and African- American themes places it securely in the company of the familiar American Quartet. Paul began with poised, noble, clean expression. Within a context of powerful simplicity he and Helen expanded the work from parlor origins to auditorium dimensions, without damaging the stylish nostalgia the composer wished to impart. Both players listened to each other attentively as they emphatically spun out the charming musical tales. In the Larghetto second movement, sometimes extracted as Indian Lament, the tone of the Wieniawski Guarneri wept with tasteful portamento and yielding expressivity. Helen echoed and expanded the whiffs of the American past with limpid vocalism and sensuous atmospherics. She also brought out the dark side of the teariness. As something of a Czech take on déjeuner sur l’herbe, the delightful scherzo summoned a midsummer dalliance with dexterous surety. Stephen Foster could have written the melody that begins the last movement, but hardly could have imagined the second-theme undercurrents or organized the development. In perfect synchrony the performers reveled in their nearly infallible and fearless interpretative muscle, even as they perhaps left the requisite shmear of period schmaltz on the deli counter.

The players then led us to a different planet for their traversal of Prokofiev’s militantly gorgeous yet unsettling first sonata, though one could stretch to say that Prokofiev’s depiction of an unsettled period encompassed some nostalgia for an earlier bucolic one. Do we want Prokofiev without grit and grimace? Does glitter represent frigid steppes, or intimate the gulags? Oistrakh, the dedicatee (he won the Stalin prize, no less), expounded on more of the score’s torments, though of course he discoursed with his pianist in beautiful tones, which we heard aplenty from Paul. Helen did not shy from the manic technical demands nor the poetic impulses. Paul raced the “wind in the graveyard” scales with uncanny insight, but the second movement, Allegro Brusco, found the players exploring more dangerous territory through an irresistible armament of violin ornament and stabbing piano octaves. The Andante found Helen and Paul sinuously entwined in twisting lines of conditional lyricism that only Prokofiev could have imagined. The players gave us pinpoint clarity with a purpose. Paul’s scarcely believable diminuendo on the concluding trill yielded to long dramatic silence before the Allegrissimo commenced with fearless morphing moods. The duo continuously exchanged roles: martial, maternal, matrimonial, nationalistic. Helen’s tone became gigantic and granitic; Paul’s manner rigidly defied the piano’s tolling death knell as he returned with even more menacing haunted scales. He closed with a diminuendo from a mile-long bow. 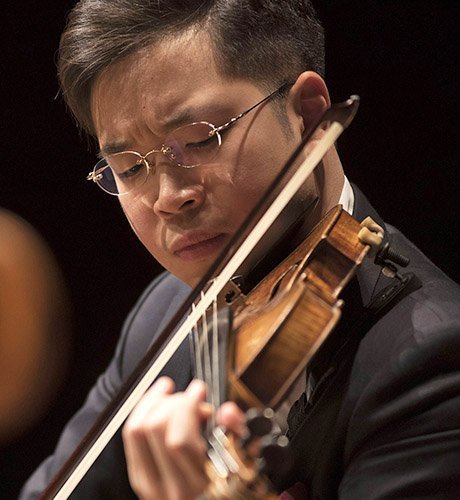 What a fine partnership these two artists shared with us.

The Guarneri suffused rays of starlight into Ysaÿe’s Rêve d’enfant. Not that Helen’s cradle-rocking wasn’t consoling and appropriately soporific, but the timbres that Paul drew from his startling instrument mesmerized us. Nonstop gorgeous effusions summoned Clara Rockmore in the Rachmaninov Vocalise … on theremin! Though Heifetz famously said that instruments don’t play themselves and that he could work his own magic with a cigar box, this Guarneri clearly remembered Wieniawski’s touch.

The annotator could not make up her mind whether Franck penned his Sonata in A Major for piano and violin or the other way around. We pitch our tent in the former camp. Helen rhapsodized at every level of color and dynamic the excellent Jordan Hall Steinway could produce; though she wrought some passages large, she never produced an unrefined or under-inflected phrase. We particularly appreciated her bel canto, when she became a fellow string player. She seemed in charge within a freely collaborative partnership. Paul emoted in the grand manner throughout the Franck, with a natural impulse of shape and hue.

The encore, Heifetz’s adaptation of Arthur Benjamin’s transgressive Jamaican Rhumba, sent all out with grateful smiles.

Comments Off on Huang Teamwork in the Highest