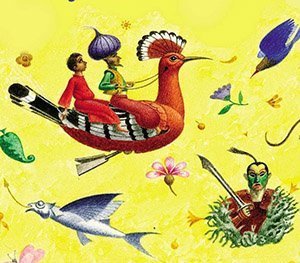 The Boston premiere of Haroun and the Sea of Stories, Charles Wuorinen’s “an over-flowing feast of witty, inventive music-theater,” will take place Saturday night at Jordan Hall in the third installment of the Boston Modern Opera Project’s season as Gil Rose leads a semi-staged production featuring guest soprano Heather Buck. James Fenton derived his libretto from Salman Rushdie namesake novel. The result is a sophisticated, adult fantasy-opera based on an equivalently sophisticated children’s novel written by a man under a death sentence. “For those who want an opera of widely diverse dramatic character and complex music, this is for you,” says Gil Rose.

Bombay-born Salman Rushdie completed his first children’s novel, Haroun and the Sea of Stories, in 1990, while in hiding in England under an intentional assassination-sentence by Iran’s Ayatollah Khomeini for blasphemy to Islam in the author’s previous book.

In a make-believe world, based loosely on Bombay and Kashmir, the story of Haroun is a tale of a fight between the free imagination and the powers that oppose it.  The libretto stays close to the buoyant spirit of the original children’s book, conjuring up a fantasy world, without ever losing Rushdie’s colorful parable of the crucial importance of freedom of speech. Aptly, Wuorinen’s 12-tone musical language has “layers of colorful, bouncy, sometimes Oriental, always ‘singable’ phrases and motives that glide or explode in many directions.” (Opera News)

The Pulitzer Prize-winning composer Charles Wuorinen (b.1938) has written more than 260 compositions to date. He has been described as a “maximalist,” writing music luxuriant with events, lyrical and expressive, and strikingly dramatic. His works are characterized by powerful harmonies and elegant craftsmanship, offering at once a link to the music of the past and a vision of a rich musical future. Regarding his music for Haroun, he described it as “typical me, and does not try to be anything non-Western, non-me, or non-American.”

Soprano Heather Buck wowed audiences last season in BMOP’s semi-staged opera The Trial at Rouen. She created the title role in Haroun which Opera News described as “a career-breakthrough for soprano Heather Buck. Diminutive but friskily all over the stage, she inhabited and enlivened her character and the story, and the music’s high flights fazed her not.”