Finding the money and the will to build a major building for the musical arts at Massachusetts’s most famous technical institute has been bruited about for more than 50 years. With the announcement that Joyce Linde, a longtime supporter of MIT and the arts, has made a “cornerstone gift” to enable building a new “state-of-the-art” music facility, that hurdle now seems overcome. The yet-to-be designed building must accommodate the current and future needs of the considerable and growing program. That there is such popular support of musical arts in various forms will come as a surprise to many, and the Joyce Linde commitment represents the beginning of an unfolding story.

The new building will stand between two illustrious neighbors. The Finnish architect and designer Alvar Aalto drew plans for the serpentine red-brick Baker House Dormitory when he was a professor in residence at the Institute in 1948, as one of but a few structures he built in America after the Finish Pavilion at the 1939 New York Worlds Fair. Eero Saarinen’s 1955 Kresge complex made a radical statement of form and material. A building committee will eventually name a signature architect worthy of this prime location.

“Our campus hums with MIT people making music, from formal lessons, recitals, and performances, to the beautiful surprise of stumbling on an impromptu rehearsal in the Main Lobby after hours,” says L. Rafael Reif, president of MIT. “Now, through a wonderful act of vision and generosity, Joyce Linde has given us the power to create a central home for faculty and students who make and study music at MIT — a first-class venue worthy of their incredible talent and aspirations. As a champion of the arts, Joyce knows the incomparable power of music to inspire, provoke, challenge, delight, console, and unify. I have no doubt the new building she has made possible will amplify the positive power of music in the life of MIT.”

According to today’s MIT News article, the new facility will offer spaces for performance, practice, and instruction, and will further the Institute’s commitment to music education that ranges from conservatory-level training to classes that welcome complete novices. It also will consolidate many of the music program’s activities into one location and incorporate critical aspects of acoustical design for optimal listening, playing, and recording.

The building’s centerpiece, a purpose-built performance lab [apparently somewhere between the seating capacity of Killian Hall (147) and Kresge Auditorium (1132)], will provide a flexible, large-scale space for experimenting with various formats, including the ability to stage unconventional music events and employ flexible seating. In addition, the performance lab and a recording studio will offer professional-level recording facilities, a new resource for the MIT campus.

Other spaces that support the performance program include dedicated rehearsal rooms and additional student practice rooms. A music technology suite will include a classroom, research lab, and two student production labs. The building also will provide a rehearsal space for the world music program’s Balinese orchestra, Gamelan Galak Tika, and for its Senegalese drumming ensemble, Rambax. 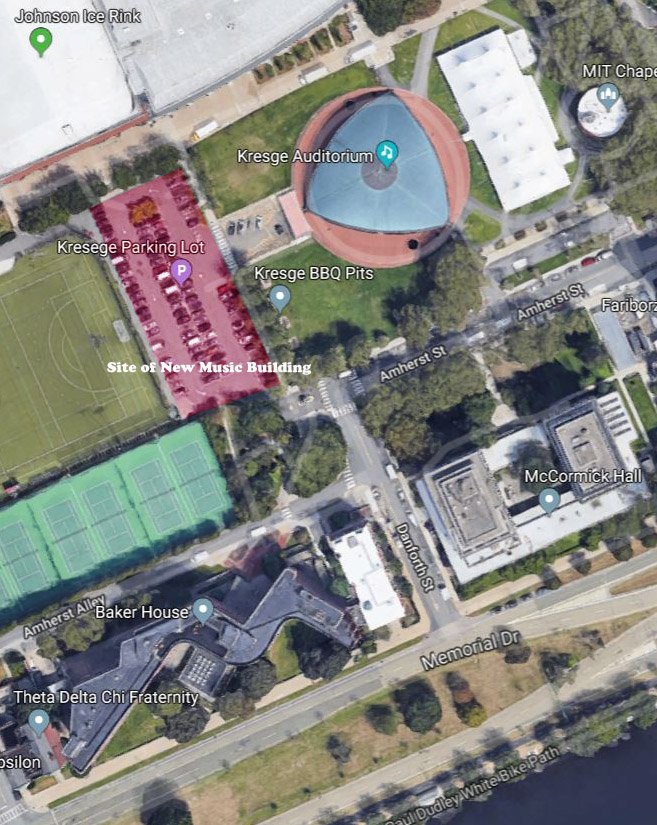 “The building’s central location on campus reflects the core place that music studies and performance have in the lives of MIT students,” explains Keeril Makan, the Michael and Sonja Koerner Music Composition Professor and section head of MIT Music and Theater Arts. “For the majority of MIT students, the Institute’s combination of a world-class science, engineering, and humanities education with superb music training is one key to their creativity, success, and well-being.”

“One fear I had about attending a tech school was that I would feel very out of place as a performing artist,” says Joy Fan ’20, a violinist who is majoring in computer science and molecular biology. “But thanks to the MIT music program and faculty, I am now actually more engaged with music: thinking about it in new ways, asking questions and analyzing works in an almost scientific manner — and experiencing music on a deeper level than ever before.”

In a typical year, more than 1,500 students are enrolled in MIT music courses, and music is among the most popular of the Institute’s 42 minors. After graduation, thousands of MIT alumni, across all fields, continue to perform and treasure music throughout their lives.

“MIT has such talent on campus, and it is thrilling to help create a space that allows students and the community the opportunity to excel in music and the arts as well as science and technology,” says Linde. “It has been a pleasure to be part of President Reif’s vision to create an innovative learning space centered on music for students who are our future leaders.”

Linde, along with her late husband, Edward H. Linde ’62, is a noted patron of the Boston Symphony Orchestra, Tanglewood Learning Institute, and Museum of Fine Arts, Boston. The couple previously endowed the Edward H. Linde Career Development Chair in MIT’s School of Architecture and Planning and, with their family foundation, contributed $25 million for undergraduate financial aid at the Institute.

“Ed and I saw the power the arts can play in transforming young people’s lives,” she explains. “We witnessed the joy that music brings, and also the power of the creativity that it fosters.”

“The new music building will be the most advanced teaching and performing space that the Institute has ever constructed, yet Joyce Linde is helping MIT to create much more than a building,” says Melissa Nobles, the Kenan Sahin Dean of the School of Humanities, Arts, and Social Sciences. “Through her generosity, we will have a center that facilitates the study, performance, and appreciation of music — and serves MIT faculty and students, as well as youth and other members of the Greater Boston community.”

MIT’s academic programs in music span performance, composition, history, culture, and theory. Courses explore connections between music and technology, science, society, linguistics, and other humanities disciplines. Beyond the classroom, more than 500 musicians participate in Music and Theater Arts’ ensembles, chamber groups, or advanced music pro­grams on campus in any given semester.

“The new Theater Arts building, W97, opened just over a year ago,” reflects Makan. “It has been astounding to see how a dedicated facility for theater-making has rapidly transformed that discipline on campus, opening up new areas of expertise and discovery. Just so, MIT’s new music building will be an active laboratory for what our music faculty have called the ‘synergies that arise from the confluence of great technical minds and extraordinary musical talent.’ The building will be a true place of ‘mind and hand,’ where our students and faculty can experiment at the frontiers of music and share their discoveries with our community and the larger world.”

Comments Off on MIT Announces Major Gift for Music Facility