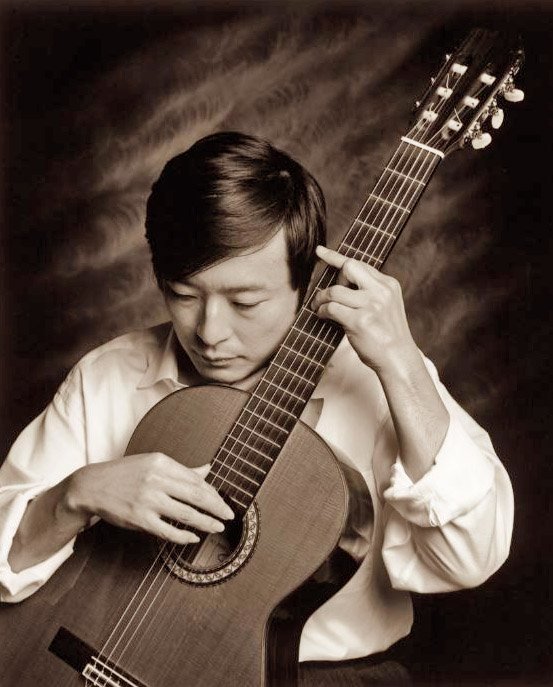 At his November 3rd concert at the First Lutheran Church of Boston, Japanese classical guitar virtuoso Kazuhito Yamashita offered music by composers from his homeland. An artist best known for his audacious solo guitar transcriptions of large-scale orchestral works such as Moussorgsky’s Pictures at an Exhibition, Stravinsky’s  Firebird, and Dvorak’s Symphony No. 9 “From the New World,” offered a glimpse of his explorations of 100 years of music by his countrymen.

The opening half comprised mostly short character pieces composed in the first half of the 20th Century, many of which appeared on Yamashita’s 1998 album Japanese Guitar Music. The handout did not include notes about the music, nor did he speak to us, so we needed to do little post-concert research to gain some understanding. Daniel Quinn’s dissertation on Japanese guitar music proved great help.

Yoshie Okawara (1904–1935) composed his five-movement suite A Bouquet in 1929. The movement titles, including “Song of the Hydranga” and “Bolero Amarylis” celebrate various flowers. Like most of the other works in this portion, they were brief and featured melodies based on characteristic Japanese tetrachords and pentatonic scales harmonized with diatonic chords and utilizing the guitar’s open bass strings for rhythmic pedal points. Yamashita rendered the music with tenderness and drew a panoply timbral colors from his guitar ranging from rich sul tasto sonorities to spikey ponticello tones plucked close to the bridge. Yamashita rounded out his tribute to Okawara, who wrote about 30 pieces for guitar, with the composer’s “Heilige Nacht” and “Koen.”

The other composers represented in this half were also pioneers in Japanese guitar music. The elder statesman among them, Moishige Takei (1890–1949), penned the earliest known Japanese guitar music. Yamashita played a grouping of five pieces by Takei, four with Italian titles and one with the English moniker “Brushwood Fence.” “La Filatrice” featured a sonorous melody on the bass strings and exquisite ponticello tones in the treble. The closing movement, “Contemplando le Stelle,” had moments slightly reminiscent of the popular “Capricco Arabe” by Spanish composer Francisco Tarrega (1852–1909). (In his concerts, Takei often played Tarrega’s music.) Yamashita closed the half with five brief works by Fuku-Ichiro Ikegami (1903–1954) including the energetic “Valse” and “Galoppo” which alternated between major and minor sections.

The concert’s second half offered some lengthier works, beginning with a grouping of three by Terukaku Yamashita (the 25-year-old son of the performer), signaling the transition to new music. “Cora,” notable for its quiet opening, grew louder and then quieter as if fading in and out of a fog. “Lotus” featured a quiet melody and an accompaniment of unusually loud natural harmonics that scampered up the strings to the higher partials. “Tou,” began with a fast arpeggio pattern that morphed into strumming and had melodies woven into the texture that chased each other into different registers.

Toru Takemitsu (1930–1996), arguably Japan’s most famous composer and a non-guitarist, was represented with his four-movement piece Folios. While the work is known for its difficulty, Yamshita negotiated the dense and pungent chords, voicings in seconds, and sprinklings of harmonics with seeming ease. After much abstract rumination, the final movement ended with a quote from the chorale from Bach’s St. Matthew’s Passion, “O haupt voll Blut und Wun-den.” Quinn observed that the anacrusis to the chorale is utilized in the earlier movements, subtly preparing the audience for the emergence of the well-known melody.

Yamashita’s own Hyojo, (Japanese Ancient Music) Overall was moody and somewhat austere. Yamashita enhanced its spare texture with many colorful timbre changes and some bent notes.

His closer,  Kojiro Kobune’s (1907–1982) Nocturno (Musical Essay), very much in a modern style, featured modal harmonies and pentatonic scales throughout its little more than two-minute length.

Throughout the concert, he had shown himself to be firmly in control of every aspect of the music and his instrument. He displayed consistent accuracy on the fretboard, sensitive touch on the strings, and dynamic, multihued tones. After a few curtain calls, he offered an encore without giving the title; in the vein of the more tonal and folkloric music of the first half it provided a satisfying finale.

This was Yamashita’s second time playing a concert for the Boston Classical Guitar Society (BCGS) in the First Lutheran Church. A few days before the concert, Yamashita expressed his appreciation for the acoustics of the church and the warm reception he received from the audience during his first engagement two years ago. His visit will likely be remembered among the highlights of the current BCGS season (visit bostonguitar.org for listings of upcoming events). This recital provided stimulating insight into to the legacy of Japanese classical guitar music as interpreted by one of the world’s legendary performers.

Mark Small is a music journalist, classical guitarist, and composer living in the Boston area. He served as the editor of Berklee Today magazine for 26 years and is a regular contributor to various music publications.