Bay Colony Brass provides Bostonian music lovers with unique large brass ensemble performances. The group—some 20 volunteer performers—was founded in 2000 and incorporates each member of the large brass instruments as well as percussion. Led by Music Director Patrick Valentino, Bay Colony Brass most closely resembles the one-to-a-part full brass section of a large symphony orchestra and bears little resemblance to the very different and larger British brass band. BCB uses five trumpet players, five French horns, four trombones, euphonium, tuba, and two or more percussionists but with a unique twist. Because of changing instrumentation between pieces, musical requirements, stamina, and preferences of the players and Music Director, keen observers will notice that the members rotate positions during the course of the concert.  Bay Colony Brass’s repertoire includes works from the Renaissance, Baroque, classical, 19th-century romantic, and 20th-century eras. There is music written for brass as well as transcriptions from orchestra works and Broadway, jazz, and film scores. The group has also commissioned recent compositions for today’s large brass ensembles.

This weekend, Bay Colony Brass is proud to present the US premiere of Christopher Gough’s Lexington and Concord as the featured piece in their performance Exploring War and Dance. Set in 4 movements, Lexington and Concord vividly depicts elements of life in the colonies that would lead to the start of the American Revolution. The work takes us through the growing unrest among the colonies and builds from there until war was inevitable. Rumor, gossip, and intrigue lead to a hymnlike rallying cry for quartet. Finally, the war itself, complete with the sounds of alarm, galloping horses, and approaching armies, ending with echoes from the beginning of the conflict.

Arranging music for an ensemble like Bay Colony Brass presents unique challenges. To begin with, its one-to-a-part makes every player a soloist, with all that implies in challenges to technique and nerve. There is also the matter of scoring. Generally, if a composer wants to write a piece for such an ensemble, he or she probably knows what each instrument can do and proceeds. Arrangers should have the same knowledge, but they also have to adapt. How to I make a passage written for strings sound good on brass? Can a trumpet become a flute? Three or four trombones a cello section? Probably not, in both cases. The trick then is to make the music sound good with what you have—that is, make sure it is playable and as much as possible make it sound as if it were written for the instruments you are writing for. 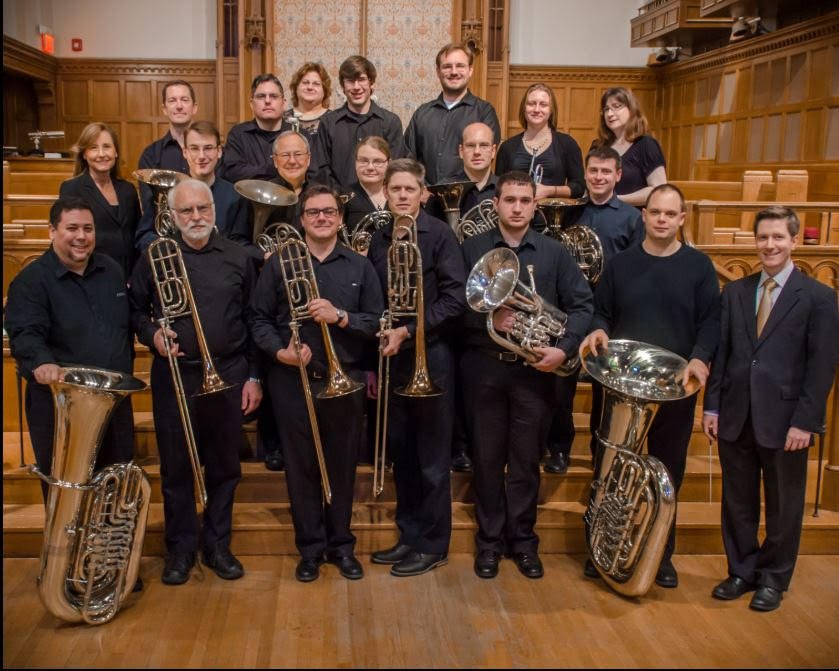 For arrangers, that often means cutting passages that simply will not work. Varying color is a task for composer and arranger. Brass ensembles have a general uniformity of sound. As you go from bass to treble instruments, it can be argued that you meld one section into another more than you change color, and yet, there are possibilities for both. Using mutes to vary color—possible in all sections, but most common in trumpets and trombones—is common, and there are various “tricks” instruments can play: glissandos, flutter tonguing, etc.

Players, mostly trumpets, change instruments often, switching between instruments built in different keys, as well as playing trumpets with rotary as well as piston valves (rotaries have a mellower sound, the mournful flugelhorns, and the sweeter cornets. Horns provide the middle body of the ensemble, and they too can change colors, sometimes with mutes but more often by using their hands to block parts of the sound in the bell. One of the most difficult tasks for slide trombones is to emulate virtuoso cello passages. Strong players can do well with this, but as fast as a slide can move, valves can move faster, thought at a sacrifice in sound. Enter the euphonium, perhaps the most flexible instrument in the group, comfortable as a soloist and cello section. Brass ensembles are heaven for tuba players. In orchestras, tubists often spend a lot of time counting or (in rehearsals) reading. In the brass ensemble, the tuba is the string bass section. All of these are things to think about when listening to Bay Colony Brass perform, and somehow they make all of this work.

On Saturday, motion, conflict, and tension come to the fore in this concert, as BCB explores the explosive energy and constant conflict which infuses the creativity of motion and the destructive capacity of war. The two actions are interlinked, with conflict and cooperation being essential to dance, and coordination and timing being essential to war. Their natures of creation and destruction are at odds, though they seem to share a primordial connection.  It is shaping up to be a performance not to be missed.

Bay Colony Brass performs War and Dance in Lexington, MA on Saturday November 17th at 7:00 at Hancock United Church.  Tickets are free of charge and donations are suggested.

Comments Off on War and Dance in Brass