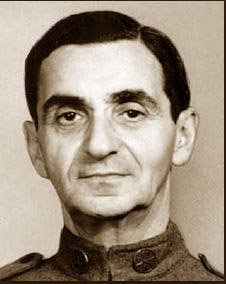 American Classics, a company founded by pianist Bradford Conner and baritone Benjamin Sears, has surely performed more songs by Irving Berlin than anyone alive, or perhaps anyone who has ever lived. They have issued six CDs on the Oakton label, with another one due out soon; each of these is filled with songs organized by date, and largely unknown. Over the years they have also produced lightly staged concert productions of early shows by Rodgers and Hart, Cole Porter, and Irving Berlin, among others.

Last weekend they offered Sgt. Irving Berlin’s soldier 1918 show Yip Yip Yaphank in Bedford and Cambridge as part of a season exploring the period of World War I and just after.

Shortly after the immigrant who had arrived as an eight-year-old boy named Israel Baline in the 1890s became an American citizen when he was almost 30, and now bearing the name Irving Berlin, he received a piece of mail from the government: “Greetings!” He had been called up for the draft. America had stayed out of the war that had already been going in Europe since August 1914. By this time Berlin had published hundreds of popular songs (among them the lasting favorite, Alexander’s Ragtime Band in 1911) and produced two successful book shows, Watch Your Step in 1914, Stop! Look! Listen! in 1915, as well as co-composing the score of The Century Girl with Victor Herbert in 1916.

For his Army training, Berlin was sent to Camp Upton in Yaphank, Long Island. The principal problem for him with Army life was his insomnia. He would stay up most of the night and fall asleep shortly before reveille dragged him into the next day. He suggested to the commander at the camp that he write a soldier’s show to keep other soldiers with show-business experience involved in their customary activity. Permission was given, including that of allowing Sgt. Berlin to keep his own hours for working.

This soldier show was not a book musical, with a plot to be acted out, but essentially a loose-limbed variety show staged in the manner of minstrel shows that had been popular in America since the 1840s (though here without blackface). The performers lined up on stage with an “interlocutor” in the center, who introduced specialty numbers and carried out conversation with the man on either end of the line (the “end men”) who engaged him in jokes of varying quality. In the American Classics production, the Interlocutor, Peter A. Carey, mostly provided information about the way certain songs from the original show were adapted later, and so on. For the purposes of the American Classics program, emphasis was focused on the musical score, which contained no fewer than 25 songs, with a three-piece “orchestra” consisting of Joe Della Penna, piano; Jason Huffmann, trumpet; and Dean Groves, percussion. In addition to Conner and Sears, the lineup included a dozen men. For the occasional young woman required in several of the songs, one or more of the men dressed lightly in drag, with a wig and a shawl.

Of the two dozen songs, one was recognizable from the printed program itself as one of Berlin’s major novelty songs, “Oh, how I hate to get up in the morning,” which became a hit in 1918 and regained its popularity when, in 1942, Berlin himself performed it as part of a skit, just as he had done in 1918, in the 1942 show This Is the Army. It can be seen in the 1943 film of the same name. Here it was performed by Benjamin Sears and the ensemble in hearty masculine voices.

Though they don’t appear by name on the program, two other Berlin evergreens took part in the show, in a slightly different form than the one we know today. Early on Benjamin Sears sang a letter song in which he asked his sweetheart to remain cheerful while he was away at war: “Smile and show your dimple.” The tune was later slightly changed but is still easily recognized as the one Berlin used some 15 years later for Easter Parade. And a song listed as “Sterling Silver Moon,” sung by Ethan Sagin and the ensemble, underwent many revisions to become the “Mandy” we know today.“Mandy,” which is the first word of the song and its key rhyme word, inducing potential buyers of the sheet music to ask for it by that name. Berlin realized that changing the title would greatly increase sales.

Taken as a whole, the songs in Yip Yip Yaphank deal with every kind of experience of the common soldier: assuring parents that everything would be all right, promising to “Pin my Medal on the Girl I Left Behind,” the demands of KP (Kitchen Police),  simple masculine matters (“Ragtime Razor Brigade,” sung by Jack Dwyer, Edwards, Elijah Hopkin, David Lones, Timothy Sanders, and Stephen Smith with the ensemble), dreaming of a group of chorus girls (with the ensemble in drag as the Floradora Sextet for “Come Along, Come Along, Come Along”). A comic Irish song presented the parents of a recruit (the three parts were sung by Jack Dwyer, Timothy Sanders, and Benjamin Sears) marveling that, when they saw the unit on parade, marching up the avenue, “They Were All Out of Step But Jim.”

One comic song was a rouser: Elijah Hopkin, Webb Tilney and the ensemble informed us that “The Devil Has Bought All the Coal,” and he’s going to use it to make things hot for Kaiser Bill.

The finale offered two surprises. First, the Interlocutor informed the audience that the final song, a rousing march, “We’re On Our Way to France,” called for the entire cast to march straight out the doors of the theater—and on the last performance of the show, on September 14, 1918, they marched right down to the ships taking them directly to the war zone.

The second surprise came as an unlisted encore. The Interlocutor explained that Berlin had written one more song to be sung at the end, though the brass at Camp Upton decided to omit it, because it was “too slow and lugubrious.” Berlin kept it in his trunk and allowed it to be sung 20 years later by a hugely popular radio star, Kate Smith, after which it quickly became almost a second national anthem, “God Bless America.” In 1918, there were a few divergences from the tune we know today, but for all practical purposes, it was already there.

It was very inspiriting to hear these songs from Berlin’s 1918 soldier show in connection with the centennial of its writing. This Yip Yip Yaphank tread the boards for the most part more like a concert performance than a theatrical piece; during much of the show, too, the performers held the music. Some of the songs had blocking, and were sung from memory, and the numbers calling for the full ensemble of rich, male voices rang with special fervor.

American Classics has two more programs relating to this period. On February 15th, 7:30 pm, in the First Parish Church of Bedford, and February 17th, 3pm in Pickman Auditorium at Longy School of Music in Cambridge, they will perform “Songs from After the War” (from 1919 and the Roaring Twenties). One April 26th and 28th, in the same locations at the same times, they are performing a “George M. Cohan 1919 Revue.” More HERE.

Comments Off on Berlin’s Soldier Show Rolled Along