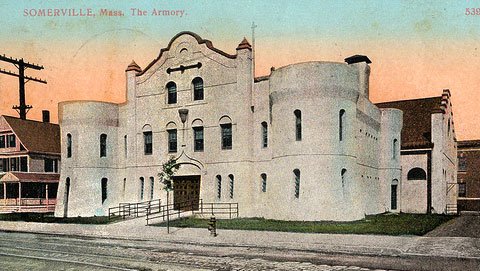 The split bill yesterday at the Somerville Armory provided a great variety of new works from the debut of Peridot Duo (sopranos Stephanie Lamprea and Rose Hegele) and Box Not Found (violinist Natalie Calma and clarinetist Kevin Price, in its second season. I am hoping to hear more from both.

Peridot opened with Meredith Monk’s Hocket, in which a single line passes between two voices. It started with flowing hums in the low register, out of which higher open vowels pop out and begin to take over. Gradually the range moved up until the concluding high notes. Hegele and Lamprea’s voices blended together making it hard to tell who was singing which pitches until they openly mouthed vowels. Calm pervaded, even though quick changes of register and pulling higher pitches out of the hummed ostinato must be anything but easy.And Smiles Make Revelations by Dan Reifsteck offers a tongue-in-cheek tribute to Autonomous Sensory Meridian Response (ASMR) videos, in which a speaker whispers and makes other gentle sounds into a microphone to produce pleasurable tingling sensations, drawing from the ASMR sound world, but ending up anti-ASMR. The piece begins with antiphonal amplified whispers, encouraging us to take deep breaths, but shortly thereafter shouts pierce the otherwise soft atmosphere. This humorous contrarian nature runs throughout, rescuing it from a mere imitation. The nightmare inspired landscapes of Kaija Saariaho’s From the Grammar of Dreams closed Peridot’s set. Its five short movements explored different relationships between the two singers, both musically and dramatically, with each singer getting a chance to play the dreamer, and the monster of the others’ dreams. Hegele opened hovering menacingly over a seated Lamprea as a frightening web of sound poured out; the subsequent movements positioned the two variously, as they sang gently in harmony. Their weaving around each other brought out Dreams’s theatrics. Having heard Natalie Calma play Irisations by Édith Canat de Chizy last weekend, I was excited to hear it again. Based on abrupt contrasts between different types of material, its soft runs contrast with furious quadruple-stops, flurries of activity are answered by glassy harmonics; when a balance isn’t struck, a whirlwind of descending notes brings the music into its next section. Calma more than met the challenges, playing with great vigor and sensitivity. Rewards accrue to those who aren’t afraid to break some bow hairs, which is to say, horse hair strewed the floor.

Ian Wiese based his What a Fast Little Engine! — Scenes from ‘Choo Choo’ on the children’s book by Virginia Lee Burton, a book Wiese said he could recite before he could read. Projections of images from the book set the scenes. There was plenty of locomotive energy without the many train clichés that make similar pieces groan-inducing. Running scales and continuous driving rhythms dominate, but the dark forest scene in the middle of the work and a gentle nocturne at the end provided an excellent balance. Sentiment isn’t often in new music, which made me appreciate this Fast Little Engine all the more.

going places, a set of three poems by Calma, received something of an enhanced reading. The three poems To Hamburg, To Paris, and To Berlin reflect the monotony of travel, conversations heard, and people observed. The trio did typical train travel things (reading, reclining, sharing chips, trying to sleep) as well as more uncommon activities (bass clarinet improvisations). It was a touching snapshot of the feelings of a weary traveler.The evening closed with the premier of Ariel Friedman’s Joshua Fit The Battle—not those walls in Jericho—but emotional ones in Long Island. Friedman’s paternal grandparents had a daughter who died young, and, out of grief, tried to erase her memory from their lives. Eventually, the secret came out, and many years later, Friedman’s father and uncle started a charity in her name. Inspired by this story, Friedman wrote a poem, which she also set. Walls go up, fall down, and a monument emerges out of the rubble. Opening with angular gestures, the composition moves through gentle hymn-like music and energetic passages with the texts recited and woven into the texture.

John Secunde is a graduate student at the Longy School of Music of Bard College studying composition.