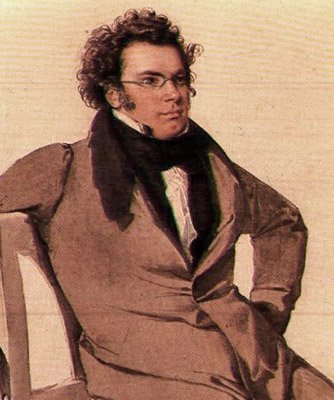 Charles Fisk, emeritus professor of music at Wellesley College, has made Schubert’s piano music a central focus of research and performance throughout his career; he has even published a book on the subject. On Friday night, in a fine recital in Houghton Memorial Chapel, Fisk showed an audience of about 100 what this concern has meant to him. Beginning with the Sonata in A Minor, op. 143, D 784, the so-called “Little A Minor” in three movements, composed 1823; the larger a minor sonata (op. 42, D 845) dates from two years later. Fisk played with a quietly assertive manner, carefully hunched over the keyboard, drawing the audience into an intimacy within which lyricism and drama freely worked. The first movement of this sonata is notable for a marchlike rhythmic regularity, which in any other environment might have seemed plodding, but which is completely offset by the exquisite shaping of the melodic contour, especially in the beautiful second theme in E major. Schubert’s ability to blend major and minor modes, sometimes even within a single chord, is part of the uncanny originality that marks him as a Romantic pioneer, in his instrumental music no less than in his immortal songs. A warmly lyrical slow movement in F major served rather like a prelude to the brisk 9/8 rondo finale in swirling triplets. Fisk’s sensitively written program notes call this short work the first sonata of Schubert’s maturity; we may always speculate whether the beloved A major Sonata, op. 120, D 664, might also have been written about the same time.

The six Moments musicaux, op. 94, D 780, are familiar to every pianist, even beginning in childhood, though one seldom hears them performed as a group; they include pages that could be Albumblätter or simply songs-without-words. But they also include areas of tonal exploration that remain heart-warming and fascinating nearly two centuries later. As in the A Minor Sonata just mentioned, composed at about the same time, they evince a very individual interplay of major and minor harmony that is characteristically Schubertian but entirely natural. There are special aspects of harmonic mystery in no. 6 couched in a 3/4 chordal motive in three strokes — upbeat, appoggiatura, and resolution, like a sigh; no wonder that some nameless editor dubbed the piece “Plaintes d’un troubadour,” without Schubert’s permission, when Sauer & Leidesdorf first published it in 1824. The longest of these pieces, no. 4 in C-sharp Minor / D-flat Major, is hard to bring off in a relaxed manner, but Fisk handled it completely without qualms.

About three weeks ago I reviewed [HERE] Simone Dinnerstein’s expressive and note-perfect performance at Symphony Hall of Schubert’s valedictory Sonata in B-flat Major, D 960. Fisk did not achieve the same technical precision, but by highlighting aspects other pianists often pass over, he revealed a deep and sympathetic grasp of the emotional structure beyond the work’s simple outlines of sonata, rondo, and Lied. Much of the psychological depth in this sonata is connected with Schubert’s imaginative manipulation of key relationships. The opening phrases, in an ineffably sweet and sad B-flat major, are disturbed by the cross-modal G-flat in a bass trill; this G-flat reappears as the center of thunderous F-sharp minor harmony on the second page. F-sharp minor is about as dramatically far afield from B-flat major as could be. But the sudden modulation at the end of the Exposition is even more startling: F major to C-sharp minor — and the C-sharp minor, though we don’t know it yet, looks ahead to the key of the slow movement.

In some brief preliminary remarks, Fisk referred to the hidden cyclic connections among all four movements of this 35-minute sonata; the connections, he said, are subliminal, but they are there nevertheless; and the tonal relationships are the stuff of Schubert’s dreams, shared gratefully with us in Fisk’s deeply thoughtful interpretation.

He played a lovely encore, too: the short Impromptu in A-flat Major, op. 142, no. 2, D 935. At this same hour, Kabbalat Shabbat services were being celebrated in synagogues all around the country, with communities both Jewish and non-Jewish invited to share the worship in memorial solidarity with the victims of last week’s anti-Semitic terror in Pittsburgh. During the intermission of Fisk’s recital, members of the audience took time to inspect a well-ordered Ann Frank exhibition shown on some two dozen portable posters at one wing of the nave of the Houghton Chapel. In 1986, at the Palais Palffy in Vienna, I had wandered through a similar Ann Frank exhibition among a silent group of high-school kids who were in tears. And I remembered that Schubert, in July 1828, maybe a month before writing his last piano sonatas, had composed a setting in Hebrew of Psalm 92 D953 for Vienna’s newly built Seitenstettengasse Synagogue. The juxtaposition of these loci—Schubert and American Judaism—seemed fitting for the moment.