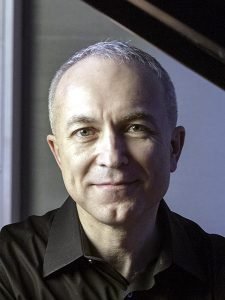 For a keyboardist to perform the complete Bach Partitas is rare, but the cumulative effect can be powerful. On Sunday afternoon at First Church in Boston, Sergey Schepkin interpreted the cycle on a modern piano, as he has been doing since his offering it on concerts at the Christ Church in Hamilton and at the Isabella Gardner Museum 25 years ago. The cycle is in Schepkin’s DNA, but it is also in his heart, irreducibly fresh and surprising.

It’s tempting to cite Stendhal citing Byron (who was citing Shakespeare) and describe the audience as “The Happy Few” except for the fact that the ample hall of First Church was pretty much full. The audience, however, was ever so hushed and intensely receptive; many closed their eyes to increase acoustic receptivity, and to preserve inner privacy, until collective gasps of awe and delight followed each piece. Schepkin started with Partita I in B-flat Major, which he played with far more depth and seriousness than I have heard it played before. By bringing out a wide range of moods, from the ephemeral to the solemn and from the mysterious to the flighty, he convinced us from the start that Bach would have embraced the nuances and modulations that a modern piano allows. Most especially, Schepkin exploited the technical challenges of the Partitas to show how they create the marvelous complexity of the sound, culminating with a Giga full of shifting shadows and bold, thrilling, experimental ideas. Schepkin interprets each final Gigue/Giga/Capriccio element of the suites as an invitation to pure artistic freedom and lyrical expansiveness.

Partita III in A Minor emphasized the “in medias res” feeling of the opening Fantasia, as well as the way in which the Corrente both amplifies and distorts the Allemande, adding a sort of retrospective depth of texture — as though Bach had discovered how to make the present affect the immediate past. Partita IV in D Major finished the first half of the program. Here in particular, Schepkin constructed the suite around the slow, heartfelt Sarabande, creating a space of deep interiority — as powerful and unsettling as Pascal’s “vide du coeur.” The Menuet and Gigue that followed brought us back by to rhythms of daily experience, but again the Gigue pointed toward emancipation and experimental freedom — unafraid, after so much beautiful restraint, of intoxication.

The second half brought Partitas II, V and VI. With the complex and moving opening Sinfonia of Partita II and its thrilling, improvisatory Capriccio; with the fast, agile mood of Partita V and its vertiginous Passepied, our ears and souls opened fully to every star in every nebulous constellation of Bach’s register. We were ready, in short, to hear Partita VI in E Minor, which Schepkin played with such depth of intelligence and free abandon that he left us quite blown away. We knew Partita VI, of course — but this unfurled like some kind of baptism by fire and earth and air and water and ether. The Toccata evoked a powerful tension between density and the forces of life, the Allemanda evoked the delights of adventures in thought, followed by moral illuminations (Corrente) and boundless travels (Air). The Sarabande, reviving and reflecting upon the Toccata, forced us back into embracing finitude and human imperfection — but lifting us to wisdom and to a time outside of time. The tempo di Gavotta, full of mature energy, wry, productive, rich, enduring, sustainable, culminated in the most advanced expression of artistic freedom, the final Gigue, no less than Jacob wrestling with the angel, thrilling, overwhelming, affirmative of every setback and every human love and victory, ending on an open cadence, unresolved, unfettered forever.

Anne Davenport is a scholar of early modern theology and philosophy. She has published books on medieval theories of infinity and Descartes. Her most recent article is on Atomism and providence in 17th-century England.