The French ensemble Les Talens Lyriques opened Boston Early Music Festival’s concert season with neither bang nor whimper, but rather a softly shimmering radiance whose imprint lingered on the retina of the soul long after darkness descended. The all-François Couperin program at Emmanuel Church Sunday offered an exquisite sampler of the composer’s chamber and vocal work in addition to the keyboard repertoire for which he is most famous.

Harpsichordist and Les Talens Lyriques’s founding director Christophe Rousset began with a string-trio rendition of the Troisième Concert of the Concert royaux alongside Gilone Gaubert-Jacques on violin and Mikko Perkola on viola da gamba, proceeded on solo harpsichord through the Septième Ordre of the Deuxième Livre de pièces de clavecin, then paired with Perkola again for the Première Suite of the Pièces de viole. The second part was dedicated to the Leçons de Ténèbres du Mercredi Saint, in which sopranos Amel Brahim-Djelloul and Eugénie Warnier each sang the Première and Deuxième Leçons respectively before joining forces in the Troisième, accompanied by Perkola on viola da gamba and Rousset alternately on harpsichord and organ.

In his pre-concert talk, Rousset observed that Couperin, “the first poet of French music,” seldom appears on contemporary concert stages because the subtle sophistication of his compositional style does not offer the ammunition for virtuosic fireworks as might, say, Rameau, another French Baroque composer Rousset has frequently championed. (Les Talens Lyriques draws its name from the subtitle of Rameau’s opéra-ballet Les fêtes d’Hébé.)

Indeed, there is an intimate, almost confessional, quality to much of Couperin’s best music. He does not compose to impress you, though he is a man of impressive depths. Listening to his harpsichord music — alternately pensive, plaintive, and playful — is like being privy to the free-flowing internal monologue of an old friend who allows you to glide along through the eddies and rapids of his consciousness even as he discovers them himself. It is like a dew drop, tremulous on a single blade of grass, at once self-contained and transparent, yet it absorbs and refracts the wide world. It is what one savors alone in the still of night with a sip of dry sherry.

Thus, with some trepidation, I approached Sunday’s concert, fearing what might be lost in Emmanuel Church’s monumental expanse, dreading the inevitable rogue mobile phone jingle and now endemic coughing cacophony. I need not have worried. Even the tenderest of solo harpsichord passages reached me with clarity. The unexpected allure of distance-enhanced delicacy redeemed any possible loss in immediacy. As with the most eloquent of Shakespearean stage whispers, a proper pianissimo draws you in. Blow wind, come wrack, even if there were audience disturbances, I was utterly rapt. “From Light to Shadow” aptly traced a programmatic progression almost uncannily in sync with the fading afternoon light.

Couperin composed the Concerts royaux for Louis XIV in the final years of the Sun King’s life. Originally performed by a quintet including Couperin on harpsichord, the pieces are scored on two staves without instrumentation, and can thus be adapted to suit a variety of chamber configurations. Here Les Talens Lyriques opted for a lean trio of violin, viola da gamba, and harpsichord. In the absence of any woodwinds, the Troisième Concert gained a poignant fragility. At times I wished for a sprightlier pulse, a more dancing lilt, but perhaps that would belie the fact that these dance-titled pieces were composed for sickbed solace rather than actual dancing.

Harpsichord is home territory for both Couperin and Rousset, and Rousset certainly brought it home with the whimsical, wistful, and warm seventh ordre of Couperin’s second book of pieces for harpsichord. Of the composer’s four books of pieces for harpsichord (all of which Rousset has recorded), the second stands out as the turning point where Couperin broke from traditional dance prototypes and gave his imagination free range in series of miniatures with intriguingly evocative titles. If I don’t have more to say about what would in any other concert have been more memorably resplendent, it is only because of what followed. 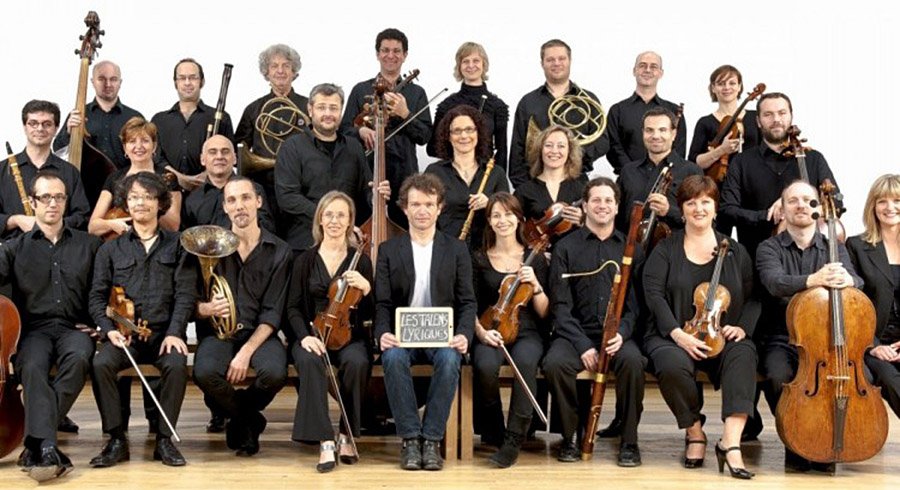 The Première Suite of the Pièces de viole is the kind of music that, when played as well as it was by Rousset and Perkola, can quietly ravish your soul. It requires restraint, surety in stillness. Among Couperin’s last works, composed the year of the great viol master Marin Marais’s death, it is as if viol and harpsichord carry out the wordless conversation of an old married couple whose hands, marked by a lifetime of toil and tears, once clenched in anger or extended in passion, now but hold each other lightly, muscles softened and skin loose, as they gaze into and ultimately embrace in the twilight.

The pièce de résistance, however, was of course the Leçons de Ténèbres. Composed as the first three in a set of nine “lessons of darkness” for Holy Week while Couperin was still under Louis XIV’s employ, these Wednesday Leçons are the sole survivors of what must rank among Couperin’s best vocal works.

Revelatory in her range, Brahim-Djelloul could soar as a single strand of cirrus cloud across a wide azure sky, wring your heart with plangent weeping tones of inconsolable grief, declaim in stentorian conviction. In this age of female reboots to screen classics, dare I dream of a Johannespassion with Brahim-Djelloul as the Evangelist? She could imbue a dictionary recitation with all the pathos and understated lyricism of an Alice Munro story.

In contrast, Warnier provided an earthier counterpart that spoke of the fallibility of flesh. At times a little pinched, a little under-supported, with a raw breathiness, she sounded slightly under the weather. In certain passages, she deployed this fine-grained grit to dramatic effect, in others, it dissolved into a rounder, ruddier suggestion of what might have been.

Even amidst the constant scramble for ever-novel “happenings” in the music world in recent years, something remains to be said for the simple perfection of the right program at just the right time, when music that is almost miraculous in its modesty melts into the fading autumnal light, and even the darkness seems to glow.

Comments Off on A Coup de Couperin