As with REV 23 and the previous shows from White Snake, Jacobs provided the libretto, this time in collaboration with her son, Pirate Epstein, who is founder, CEO, and COO of SqueePlay, a video game development company. Perhaps it’s no surprise then, that this show takes place in the bedroom of Sonny, a gamer who, confined to her wheelchair, finds escape in video games. Nutcracker-like, her favorite avatar, Apollo, comes to life, and leads her through his digital world: we’re introduced to a colorful cast of video-game heroes, vaguely drawn from Greek mythology, who have their manifestation both as humans and video-game characters. This is meant to be a deeply-drawn arena in which these characters have lives of their own, constantly arguing and competing with each other, occasionally embroiling themselves into dramas that explode into love affairs or earth-shaking battles. Back in the cold, harsh light of reality, however, there is an urgency to Sonny’s human life and physicality: her illness is getting worse, the medical bills are piling up, and time seems to be running out. It is Apollo who provides the solution to these mounting worries, convincing Sonny to enroll in a tournament which, if she wins, could provide the $3 million for her medical bills. But if she loses, it could result in the final and irreversible death of her beloved Apollo in the video game dimension: PermaDeath.

There may be makings of a moving existential exploration here, and Jacobs’s and Epstein’s libretto seems poised to delve therein. But rather than develop compelling characters, PermaDeath depends on two-dimensional proxies to recite banal treatises on the nature of life and death. Some of this is strangely evocative: I was moved by the song of the anemones by Apollo and Aphrodite after the death of their beloved Adonis; the concluding quotations from the Book of Ruth seemed to be reaching for something profound. But interspersing purple prose and bad poetry with literary references doesn’t make for compelling characters or plot; although it’s clear that the audience is meant to believe that the stakes of this video game tournament couldn’t be higher, it’s hard to care.

Rather than focus on the plot, perhaps it’s best to consider PermaDeath as a vehicle for inventive music and staging. The collaboration with Visconti, the CGI artists, and theater technicians frequently compensates for the self-indulgent libretto that fails to do any of the heavy lifting. Instead, we are treated to Zane Pihlström’s beautifully minimalist set reminiscent of the Star Trek holodeck or the racing plane in the 1982 Tron. Singers donned understated costumes that subtly marked their roles in the videogame and in reality.

The incorporation of CGI is simultaneously the most novel and traditional aspect of the production. From its very inception, opera—particularly Baroque opera—has reveled in spectacle, incorporating technology into the staging. PermaDeath revels in the latest iteration of this novelty, and audience members are encouraged to download the app on their smartphones to experience dancing images in the front and back covers of the program. The story sparks to life when the characters in the world of the video game, reveal themselves on a screen above the stage. Animated heroes from mythology sing arias and duets (manned back-stage by faceware singers Nathan Rodriguez and Jennifer Caraluzzi), fall in love, and battle each other in the verdant mountainscape of this videogame opera. Even more exciting, things get bloody in this digital realm: rather than play to the old tricks of costume blood or red fabric tucked in the shirt pocket, Marsyas sheds graphic viscera when he is flayed alive by Apollo; Adonis’s avatar sprays gore over the screen as he is crushed by falling armor.

Visconti’s score rendered the digital world with a spare but expressive, and often satisfying orchestra (led by Daniela Candillari). Here, as in video games, music is borrowed from folk traditions and invents a language unique to this digitally created world. Much of it is pleasant enough, but when it hits home, it is penetrating: Visconti’s setting of Elizabeth Barrett Browning’s Sonnet 43 (How do I love thee? Let me count the ways) for two sopranos is a standalone masterpiece. Life in the real world is far less lush, dipping into a hearty, yet atonal, palette. Here, Visconti manages to be equally playful and expressive: arias and ensembles tend toward angular soundscape, but always in service of the libretto.

Serious balance issues plagued fully-committed performances from a talented cast on Thursday’s premiere, especially in the video game portions of the opera which layered sound effects over the orchestral backdrop. When accompanied from the pit or when singing unaccompanied, the ensemble revealed itself to be in especially fine form. Josh Quinn’s rugged Apollo benefited from exquisite control and an expansive sound; this paired well in scenes with Maggie Finnegan’s (Sonny) delicate, yet expressive soprano, precisely tempered in its upper ranges. A minor character, countertenor Patrick Daily (Boris/Miniboris) proved particularly memorable on Thursday evening, not only because of his complete commitment to the role, but also for his sensitively shaped lines that immediately claimed our attention. Amy Shoremount-Obra as Artemis, Christopher Carbin as Marsyas, Shirin Eskandani as Aphrodite, Sarah Coid as Adonis, and Stephen Carroll as Niobe also gave strong performances. 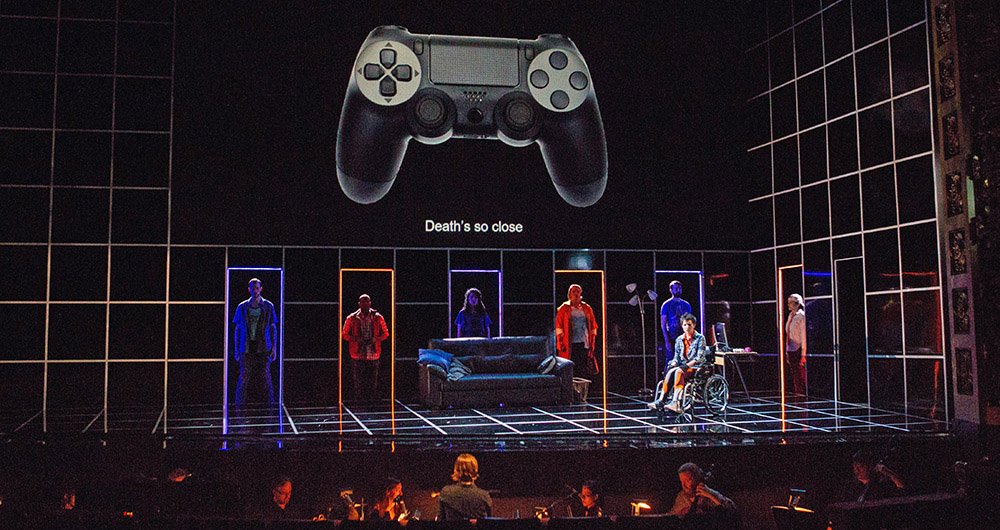 PermaDeath continues its run at the Cutler Majestic in Boston through Saturday.