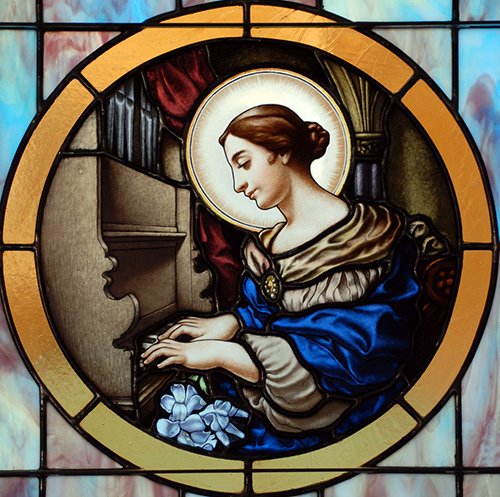 The legend of St. Cecilia tells an unlikely story. During the second century, a Christian Roman maiden, although sworn to virginity, was given in marriage to a pagan nobleman, Valerian. During the ceremony, she shunned the festivities and their music, singing only to God in her own heart. On the wedding night, she told her husband that an angel of the Lord would punish him if he violated her virginity, but would love him if he respected it. Valerian converted along with his brother Tiburtius. The two brothers were promptly martyred, but Cecilia miraculously survived the executioner’s blows long enough to be able to request that her house be converted into a church. Cecilia’s feast day has been celebrated since the fourth century, a collection of Masses in her honor survives from the fifth century, and she is depicted in art works dating from the sixth century on. By the 14th and 15th centuries, she was shown either holding or playing the organ (possibly a reference to the musicians who played at her wedding), and by the 16th century she had become the patron saint of church music.

In a perceptive and informative pre-concert talk, musicologist Teresa Neff outlined the salient features of the Britten and Handel works on the program and the circumstances of their composition. Britten’s Fanfare for St. Edmundsbury was written in 1959 for the Pageant of Magna Carta at Bury St. Edmund’s cathedral. His Hymn was composed — or rather, reconstructed from memory, the manuscript having been confiscated before his departure — during his long sea voyage back to England from New York in March and April, 1942, and first performed on November 28th of the same year. The text by W. H. Auden, “Anthem for St. Cecilia’s Day,” was dedicated to Britten, who in fact was born on the saint’s feast day of November 22nd. Handel’s Ode, to a text adapted from John Dryden, was composed rapidly between September 15th and 24th, 1739, and premiered on November 22nd at the Theatre Royal in Lincoln’s Inn Fields. Joining in the discussion after the talk, Ryan Turner explained some performance decisions. The trumpeters would perform from the church balcony in accordance with Britten’s specifications that they be placed far apart. Repetition of the D Major Fanfare after Britten’s Hymn, which is in E, would allow it to serve not only as a processional giving the choir time to return from the nave to their seats in the chancel, but also as a tonal link to the Handel Ode in D Major to follow.

Indeed, the Fanfare provided a stunning introduction to the evening’s program. The three trumpeters—Terry Everson, Adam Gautille, and Bruce Hall — each played a solo line with its own distinct melodic pattern, then converged in a resonant trio. This was playing of a high order, with more fine trumpet playing, both solo and ensemble, to come in Handel’s Ode.

The five-voice a cappella choir for Britten’s Hymn assembled in the front of the nave. Basses and tenors underpinned the ethereal soprano and alto parts (originally conceived for boy trebles) rather than joining them in their melodic excursions. The sound was delicious, although the words were not always easy to follow in this rarified atmosphere. Auden’s text consists of three separate poems on different themes and metrical schemes. Britten took the four-line invocation to Cecilia that completes the first poem as a refrain, appending it to the second and third poems as well. The terse second poem evokes a letter from Auden to Britten exhorting him to grow out of his adolescence and accept himself as he is. The third and most complex poem invokes the sense of hearing and the phenomenon of sound itself, while mourning lost innocence. In the final refrain, the music returns to the bare texture of its first occurrence. Ryan Turner led the group with a fine sense for vocal color and musical line.

The year 1683 marks the foundation of the London St. Cecilia Society and the establishment of November 22nd as the date of its annual celebration. The earlier of Dryden’s two odes for St. Cecilia makes no attempt to tell her story, honoring her memory instead in rousing praise of music in all its manifestations. The arrangement of the text by Newburgh Hamilton allowed for recitatives, arias, and choruses, with ample opportunities for the genre scenes and word painting that Handel loved. The Overture began with a stately Minuet in the French manner, followed by a sprightly fugal section and a Da capo return to the Minuet. The third section was a gentle dance in triple time. Two recitatives, the first (secco) with continuo only, the second (accompagnato) with strings, oboes, and bassoons, described the emergence of “harmony” from sonic chaos. Tenor Matthew Anderson sang with ringing tones of considerable dramatic power. The answering chorus depicted harmony running through “all the compass of the notes” with ascending and descending scales and long pedal notes in the lower strings at “the diapason closing full.” Accompanied by continuo and solo cello, Jessica Petrus was the soprano soloist in the aria “What passion cannot music raise and quell,” another reference to Platonic theory. In sectional repeats, Petrus enhanced the stately sarabande rhythm with elegant ornamentation. Cellist Shirley Hunt provided her own extraordinary cadenza that slyly incorporated quotations from Bach, Purcell, and Handel himself.

Each of the arias that followed invoked the expressive power of a particular instrument. In “The trumpet’s looud clangor,” tenor Charles Blandy, followed by the chorus, competed with the <brilliant first trumpeter, Terry Everson, and the equally adept timpanist, Nicholas Tolle,> in virtuosic display.. Melting tones from soprano Kristen Watson and flutist Vanessa Holroyd, accompanied by organist Michael Beattie and lutenist Michael Leopold, evoked the “woes of hopeless lovers,” a familiar operatic trope. Jonas Budris, another fine tenor, and “sharp violins” proclaimed the emotional and dramatic power of stringed instruments with witty indignation for “the fair disdainful dame.” Soprano Sarah Moyer praised Handel’s (and Cecilia’s) own instrument, the organ, in a tender aria that invited improvised ornamentation by the organist. “Orpheus could lead the savage race” was marked “Alla Hornpipe” by Handel. The dance, with its sharp accents and syncopations, was known to him from Purcell’s theater music and from published country-dance anthologies. Soprano Carley DeFranco matched the violin acrobatics with virtuosic roulades.

DeFranco’s brief accompanied recitative brought the only mention of Cecilia herself “when to her organ, vocal breath was giv’n.” This declaration introduced the final chorus, announced by soprano Samantha Dotterweich singing, unaccompanied, from the balcony, in alternation with the chorus and orchestra. At the words “The trumpet shall be heard on high,” the first trumpet suddenly joined in, followed by the second trumpet and timpani. The final fugue, “The dead shall live / And music shall untune the sky,” was as forceful a Handelian ending as anyone could wish.

Comments Off on Mannys Hail Cecilia