More than a dozen years after its premiere in San Francisco, John Adams’s opera Doctor Atomic, with a libretto by Peter Sellars, received its first performance in the region where its events, the creation of the first atomic bomb, and its testing on July 16, 1945, took place. Two facts made this production, which I saw on July 18th, different from any since the world premiere in 2005.

First of all, the Santa Fe Opera structure is on a high plateau to the northwest of the city; the back of the stage is open to the desert and mountains. When the sun sets, viewers can become aware of the distant lights of Los Alamos, 35 miles away, where the plans for the bomb were developed. (The test was actually carried out at the White Sands Testing Ground near Alamogordo, nearly 250 miles to the south.) The intervening land is mostly open high mesas, where wind and rain could spread freely over a wide area.

These lands were largely inhabited in 1945 by members of Pueblo Indian tribes who, of course, knew nothing about the secret military development taking place in their midst and who were most directly affected by the radioactive fallout created by the explosion. Large numbers of children born shortly before or shortly after the explosion have dealt with various cancers and other medical issues since 1945 and have passed them on to their offspring. It was because of this continuing medical issue that librettist and director Peter Sellars approached the leaders of the affected tribes and suggested that they might find it appropriate to perform the traditional Corn Dance in conjunction with the performances. The dance expresses the blessing of the rain and of the earth, and in the context it could be seen as an act of forgiveness.

Sellars himself gave a particularly interesting pre-performance talk, partly to discuss the nature of the opera itself (“It’s not a biography of Robert Oppenheimer; there are three 500-page books if you want that”) as the beginning of a new world which its creators did not understand, did not know where it would go. We, he averred, have a better idea than they did, though we have still seen only the first half century of this new world. He introduced two Pueblo women who had helped organize the plan for the dance, both born around the time of the test explosion, and both living with medical issues caused by it. They explained the nature of the Corn Dance and the assembled multigenerational group of dancers from Tesuque, Santa Clara, and San Ildefonso Pueblos, ranging from dancers perhaps in their 70s to a few children as young as five, who performed it.

The half-hour Corn Dance started 45 minutes before the opera and was accompanied by native instruments and singers. A sign at the entrance to the auditorium informed arriving guests of the nature of the presentation, requesting that listeners not talk and adjuring them not to photograph the performance. (The pueblo dancers return during an extended orchestral passage in the second act of the opera to present a shorter version of the corn dance.)

As the sun set, the lights of Los Alamos began to shine faintly in the distance. On the stage itself, David Gropman’s scenic design was almost entirely bare except for a large ball of polished metal, suspended off the ground, representing the plutonium mechanism of the bomb (the “gadget,” as participants referred to it) and the forthcoming explosion. During the course of the performance this ball seemed to raise or lower itself, and to move downstage as if more closely dominating the thoughts and actions of the humans working on the project. Moreover, James F. Ingalls’s lighting design assured that the ball was always a dominant feature, reflecting changing colors, often seeming to project two eyes and a diabolical grinning mouth. Otherwise, the stage was empty except for furniture elements moved on to represent the Oppenheimers’ bedroom or a tall ladder that allowed a technician to climb to the level of the metal ball to make adjustments to the bomb.

In addition to the original historical documents, the words of which made up much of the libretto, Sellars draws on appropriate poems for Oppenheimer, a regular reader of poetry, who ends the first act with a powerful reading of John Donne’s sonnet, “Batter my heart, three-personed God,” and Kitty Oppenheimer, who sings Adams’s setting of a poem by Muriel Rukeyser (a school acquaintance of Oppenheimer’s and later a public antagonist of nuclear testing). Pasqualita sings a “home song” of her people, evoking the blossoming of the “cloud-flower” and the ensuing rain.

The fusion of passages derived from the historical reports and personal documents offer a series of vignettes from the last 24-hour period before the actual test, dealing briefly with concerns of military secrecy, of the very iffy state of the weather, and of the medical issues regarding radioactive fallout. In the debate between Gen. Groves and Capt. Nolan about whether to notify or move the people who might be downwind of the explosion, Groves is most concerned that the secrecy of the project remain complete. Growing increasingly tense as the thunderstorm threatens to interfere with the timing of the planned explosion, he angrily threatens Hubbard the meteorologist with arrest if he “refuses” to provide a favorable weather report. At the same time there is a light-hearted conversation between Gen. Graves and a subordinate discussing the manner in which he cheats on his diet. Wilson’s midnight check of the bomb itself (on a high ladder next to the plutonium sphere), uncertain whether a random lightning strike during the thunderstorm might not set off the nuclear explosion prematurely, expresses the general tension among all participants.

Throughout these sequences, which comprise all of Act I and the first half of Act II, John Adams’s music is by turns nervous, briefly serene, dynamic, rhythmically irregular, but largely continuous for the members of the orchestra, was precisely and energetically conducted by Matthew Aucoin. All of the singers have been brilliantly chosen for their parts, especially McKinny and Bullock, for the demanding parts of the Oppenheimers, and Arwady in the briefer, but essential, earth-mother role of Pasqualita. 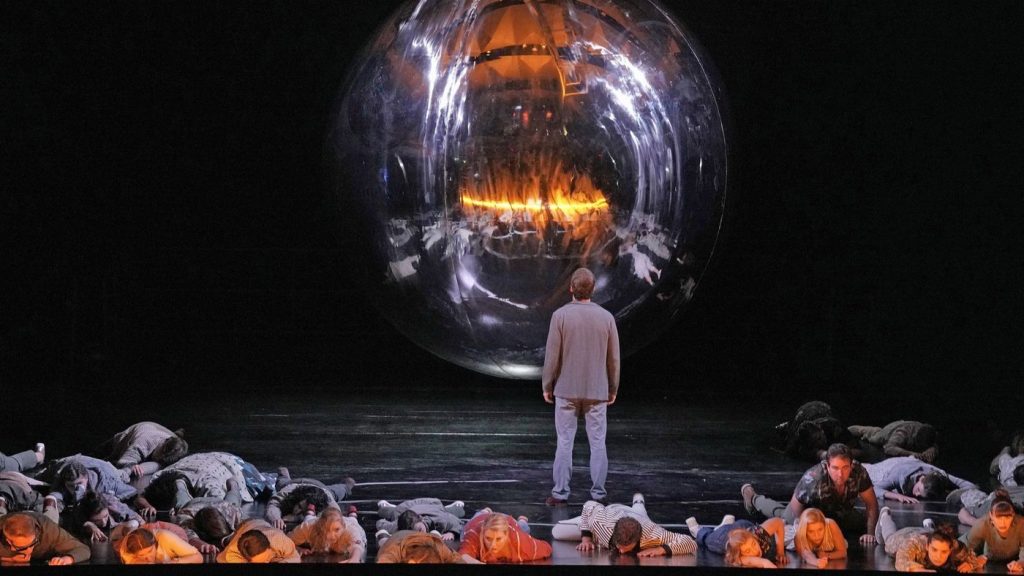 The opera leads just up to the last second of the countdown that will bring the fateful explosion. The treatment of this finale all but freezes time. As the last stage approaches, the entire cast and chorus hunker down at the front of the stage, as if hidden behind safety barriers, staring out at the audience. The orchestra builds with an irregular, nervous, gradually increasing dynamic of the looming explosion, until the precise instant of the blast, whereupon the only remaining voice is that of a Japanese woman (on a recording) pleading for water. The instant of the successful test becomes fused with the catastrophic instant of the bomb’s dropping on a human target, changing the entire future.