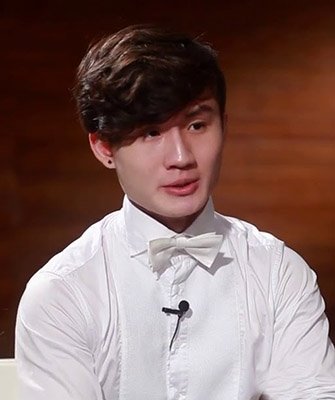 Niu Niu is by some margin the most accomplished and most completely realized young pianist I have ever heard. China-born as Zhang Shengliang, and 21 this year, he plays with utter naturalness and poise, relaxed elegance, and what you might call daring except for being so extraordinarily effortless and in the service of thoughtfulness. Tuesday night in his Foundation for Chinese Performing Arts Walnut Hill Festival recital, Niu Niu surveyed a small compass, only 25-plus years of Romantic standards (Mendelssohn, Chopin, Schubert, Liszt), so we don’t know how he would do in wider repertory. But I’m willing to bet.

What was so uncommon? The lovely opening of Mendelssohn’s Rondo Capriccioso made the composer sound also soberly thoughtful, and after the music turns toward the usual elfin stomps I marveled at Niu Niu’s evenness of touch along with his recognition, or rather finding, of a variety of different charms and moments of wit. With Chopin’s Barcarolle, the gondolier’s work unfolded without labor, unaffected yet with noticeable shapeliness of phrasing; my scribbled note says something dumb about “listening to it just as music.” Schubert’s G-flat Major Impromptu was a kind of awful in today’s luscious-creamy way, the sound too ravishing and the approach a little fussed. Still, in floating as all melody, it became more Chopin—or as Chopin would have performed it.

(At 19 Chopin made a summer visit to Vienna, playing and attending concerts and touring piano manufacturers; lots of letters home, but not a word about Schubert, who had died only the previous November, suddenly. There’s got to be a research project here.)

Two actual Chopin Impromptus followed, No. 2 Opus 36 and No. 3 Opus 51. Niu’s performance of them, even with or maybe because of his lovely, effortless lines, caused me to apprehend their structures more readily than usual (lack of such recognition is a problem I have with Chopin). The Scherzo No. 3 grew so organically, its musico-drama understood and conveyed clearly, that I experienced its perfection as somehow almost unbearable. Which made me realize I may have been auditioning too many high-quality young pianists with minor but real drawbacks. A nonsensical thought, but the moment it occurred to me came when Chopin’s chorale chords emerge from the deep followed by those sprays of pearls. It’s not really a throwaway run, not filigree only, but Niu’s sparkles were subordinate. I understood them as the airborne accompaniment they are. Few Chopin pianists quite carry that off. Another first at this recital, then, was that I found myself smiling more than twice.

Schubert waltzes mesmerized Liszt, whose Soirées de Vienne No. 6 received a reading of lilt, flow, and fragrant candlelight refracting off cut-glass chandeliers. It really did dance, with gravity, and again I smiled, gravely. Regardless of pleasures given and taken—more than most does Niu Niu show his fondness for what he’s playing, and I don’t mean the grinning of splashier superstars—the Liszt Sonata was treated with utmost seriousness. This was my half-dozenth hearing recently, if not more, including in a recital only two evenings before and another the evening right after. The work of course has myriad pleasures to reveal, even as it’s sometimes enlisted for showier purposes. Niu Niu played it with the dash of other young guns, and not so young, but with more point, more arc, more simple sincerity, more-intelligible “subsectioning”, more attention to the realized place of the segments in the strange dramatic narrative. Liszt’s roars had more form, and his afterthoughts were afterthoughts. I heard inner lines anew even as they were not spotlit. With calmest focus, Niu Niu was atop the thing from the getgo: he played it, not vice-versa. If he performed with less show and maybe less demonstration of sheer power, it was because there was no need. The fugue began with unusual charm and spriteliness, somehow sounding more interesting, yet its conclusion (not really a conclusion, but you know) frightened me. If Niu had been wearing a Fitbit instead of a shiny little leaping cord bracelet, the offsite data server would’ve been highly stressed. The Liszt’s ending defined ethereality per the dictionary: “delicate and light in a way too perfect for this world.”

Niu Niu’s first encore was Chopin’s (maybe, maybe not, a broody piece regardless) C-sharp-minor Nocturne, and the second was Liszt’s rich transcription of Wagner’s Isoldes Liebestod. Both were spellbound and spellbinding. The last encore was Debussy’s Claire de Lune, mushy, overpedaled, sounding understandably tired. Niu Niu could have quit at any point prior, even after the first page of the Mendelssohn, and come out ahead.

So I strongly suggest that you hear him perform. His presenting as confident, tall, movie-cute, sincere and modest even as he raises his hands slowly to the sky and tilts his head back after cadences may work against his appeal for some. The rounded attack, idiomatic rubato, general high and even polish, with a slight “low-keyedness,” may do the same for others. But let the integrity and deep engagement informing Niu Niu’s production prove decisive. (Three-quarters of this recital’s works may be heard on his recent CD, in readings perhaps faintly less exciting than live; but be prepared for the intermittent loud ad with Spotify’s free version, which requires a login.)