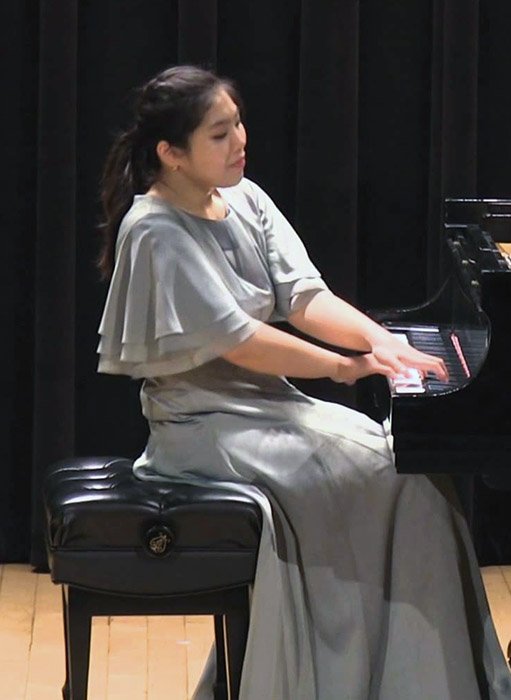 Deep focus—the movie-making practice of filming with a large depth of field, rendering everything in the image, faraway or close, equally sharp—can be a useful metaphor for describing a type of musical performance, one in which every level of the score, foreground or background, comes across with similar definition and clarity. What was interesting about pianist SangYoung Kim’s August 1st recital at Walnut Hill (part of the Foundation for Chinese Performing Arts’s annual summer festival) was how the metaphor extended to technique, with Kim creating musical deep focus via analogues of the effect’s cinematic requirements: tight apertures and saturated brightness. Her interpretive conceptions were lean and evident; her sound steely and intense.

Kim’s résumé includes a circuit of competitions (prizes from the Queen Elisabeth and the Bösendorfer International contests, appearances at numerous others, including the Tchaikovsky Competition) but also academic rigor, culminating in a doctorate from the New England Conservatory. Scholarship and show were combined in the recital’s first half, devoted to comparative rarities that nonetheless offered ample opportunity for pianistic spectacle. Carl Czerny’s op. 33 Variations on a theme by French violinist Pierre Rode (“La Ricordanza”) exemplifies the sort of late-Classical-era virtuosity that has often appealed to pianists of adamantine dexterity; Kim applied a firm, faceted sound throughout, the lyricism lucid, the faster passagework torrential and coruscating. Like the Czerny, Henri Dutilleux’s 1948 Sonata represents, in a way, the limits of a style, in this case post-Impressionist, pre-serial Parisian modernism, pushed as far as it can go. Kim emphasized both the music’s athleticism—family resemblances to Bartók and, especially, Prokofiev were brought to the fore—and its fervent volatility, expressed as one high-contrast tableau after another. It was an exhilarating argument for the work’s increased currency. (One could imagine it as an attractive dance-card partner to Elliott Carter’s Piano Sonata of similar vintage.)

By comparison, the program’s second half was thrice-familiar: Franz Liszt’s Sonata in B Minor. Kim approached the rite as an exercise in extremes, not only of tempo, with fast sections blisteringly breakneck and slow ones unusually deliberate, but also of color and articulation, staccati and accents whetted to a pike’s point. It was an interpretation designed to startle and intrigue as much as impress, and even when the risks didn’t pay off—the go-for-broke velocity occasionally veered outside the lines, and the expansive rubato telegraphed a few of Liszt’s more beguiling harmonic shifts—Kim’s disinclination to cushion the Sonata in safe, routine choices was refreshing, promoting renewed appreciation for Liszt’s audacity, his creative use of themes, of harmony, even of silence.

For an encore, Kim deftly untangled the chromatic thirds of Frédéric Chopin’s op. 25, no. 6 Étude, the performance less “played like the wind,” as critic James Huneker once recommended, than evoking the industrial revolution that pervaded Chopin’s era: a Jacquard loom, perhaps, weaving intricate brocade with uncanny, humming speed.

Matthew Guerrieri regularly writes on music for the Boston Globe; his writing has also appeared in such publications as NewMusicBox, Vanity Fair, The American Scholar, Playbill, and Musical America.