A big guy with a big personality gave a sizable recital Friday night in the Chinese Performing Arts Foundation Walnut Hill Festival that was unusual in several respects. China-born, and trained and degreed with many of the famous piano names in Canada and at NEC, Curtis, and Yale, Chu started off with difficult-to-decipher standup patter, along the lines of “How’s everybody doing tonight?” He then posed, “What does music mean to you?”, asking seriously, wanting to engage. When audience members responded “romance,” “language,” “feeling,” he pronounced those good answers, which fortunately he did not much pursue. He used sheet music. The evening had a title, “When Liszt Meets Beethoven, the Journey continues … ,” of which little was made.

Chu began Beethoven’s Waldstein Sonata at quite the clip. Playing loud and fast, he flubbed more than one passage. He rushed at times, a little, and occasionally one hand dominated, then the other. At more than one moment, I’ll bet I was not the only person thinking, “That was not a good idea.”

And yet, and yet. After such dispatch of the Waldstein’s first movement, the time-stopping Introduzione received extraordinary focus. Chu keenly felt Beethoven’s rests, disconnecting the phrased groups, breaking the rising chords’ forward motion over this page-plus and therefore oddly emphasizing it. The hinge swinging into the Rondo led to rolling excitement, even as smidges labored slightly, rhythms swayed slightly waywardly, and another flub became something close to brief improvisation. This was an altogether human performance, to put it most kindly, unlike the superhuman hygiene of younger prizewinners today much of the time. Chu’s swept glissandos and the trills leading to the Waldstein’s grand close sounded so lovely that lack of crispness didn’t matter. What an achievement that sonata is, for 1804, or for any other year.

Chu introduced Opus 109 talking, nearly inaudibly, about “melodic harmony.” The composer’s curly figures opening that work blipped and burbled, though, and it felt as if this late sonata too might get mixed treatments. But by the Adagio, it became plain that any bugs had flown. Again with engrossing phrase breaks, and now with textures and inner lines of new point and new inflection as well, the pianist cooked all these organically grown ingredients and served them within the Prestissimo and the Andante variations movements. Through the last pages, rhythmically strong as Beethoven does his wizardly time distensions, the loud righthand pinky cries were struck with plenty of clang. Indeed, under Chu’s hands and fingers the entire concluding minutes reached a level of drive, anguish and, for the final 90 seconds, spent holiness that only Kovacevich (1966) has matched. Which is the highest compliment I can pay. 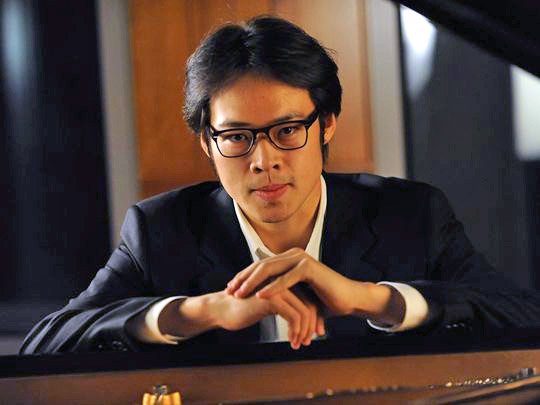 After the break, the Liszt Sonata was up, preceded by more short words notionally on musical matters. An uninterrupted half-hour, this large venture, from 30-plus years later and another world, also began imperfectly, getting better, more fluent, as it proceeded. Chu handled brutal passages easily, excitingly, other measures less so. Everywhere he produced immense sound from the instrument, specifically some thunderous lower-midrange congestion, in the good sense of the term, dense and satisfying, such as I’ve rarely heard. Fugue textures were democratic, those lines chasing one another every which way before braiding. Sweep abounded, and ending-level climaxes occurring well before the end thrilled, and thrilled again.

It was all almost enough to make me forget the Opus 109 theme and variations, but that’s what I want to rehear and that other pianists should learn from.

Comments Off on The Human Sweep of Yue Chu