The 19-year-old Canadian-Chinese pianist Tony Yike Yang began his Chinese Performing Arts Foundation Walnut Hill Music Festival recital in lovely quietness, and a certain gentleness of touch from him prevailed throughout Saturday evening. The Opus 101 A-major Sonata, early late Beethoven, received a careful and energetic reading, from its “in midsentence” (Steinberg) beginning onward. A summertime piece, “a series of impressions and reveries” (Beethoven), it grows complex, rhythmically strange, downbeat-avoiding in syncopation, fitful energies surrounding a famously poignant Adagio. Yang served it all up episodically, as warranted. Yet he often seemed vexed by the composer’s penchant for fits and stops, with the pointed phrasing becoming choppy and halt. At moments it also could have been jollier, and the Allegro finale needs to exult more. But the big wit in the marching Vivace—by 1816 it doesn’t need to be noted as Haydn’s influence anymore, Beethoven now fully comfortable with in own larfs and rib elbows—did not escape the young musician.

Currently pursuing dual degrees in economics and performance at Harvard and NEC, Yang is lauded online for a Chopin Barcarolle from three years ago. The Walnut Hill rendition came together better than that one, and was not only lovingly impressive in most respects but successful as a familiar musical experience. It still felt to me somewhat unflowing overall, in the softly stroked journey from here to there. Phrases and measures had shape, and indeed Yang has mastered the nifty, taxing new technique of each finger sounding almost as if it has its own rubato, without fussiness. That can create a little incoherence in any case, and here a faint unsettled quality prevailed overall. Similarly the A-flat major Polonaise. Everywhere it got treated with a most rounded attack, in fact so rounded you wouldn’t really call it an attack, and if this represents a trend among young Chopin prizewinners today (I have remarked it before), it’s most welcome. But again, little hung together in overarching and driving senses. The three Opus 59 Mazurkas floated into the Delbridge performance space with point and (like the Barcarolle) many instances of interiority of voicing, as with all students of Wha Kyung Byun. Not the final say in shapeliness, though, and you might not have realized that these were dances, either. 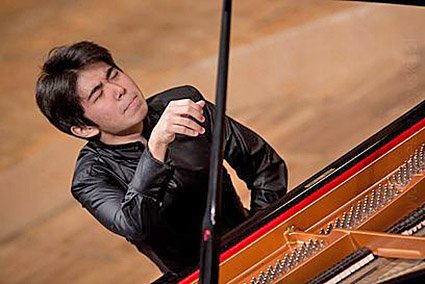 It must be said that my demurrals tend to quibbling. There’s little Yang cannot do technically (speed, number of notes, power, digit marksmanship), and at the same time he projects softness more capably, with more nuance and shading, than other young pianists. One past reviewer mentioned Lang Lang, with whom Yang on Saturday had zero in common musically, so if he has been recalibrating and modulating certain former elements of his style, he can declare victory. And I would bet that larger attention to and appreciation of coherence, motion, shape and form are under development. At least Yang doesn’t dissect each note and chord and measure as some do.

Three of Prokofiev’s Romeo and Juliet Selections broke up the Chopin sample. Yang relaxed and played with appropriately plainer interpretation. The music is not Beethoven or Chopin; lesser depth and simpler dramas permitted easier-going approaches.

Likewise with Ravel’s Gaspard de la Nuit, which closed the recital. The three scenes, water spirit, hanging corpse, scampering dwarf, may have lacked some musical sweep also, individually and altogether, but Yang had them sparking and sparkling. Textures and colors abounded, exploding delicately and not so delicately—the pianist rose over a foot off the bench more than once. Contrasts glittered while remaining tactile, rounding across octaves of dual runs and glissandos, one hand outshining the other. The piano’s treble break to harder higher sound dissolved in sonorous washes of nimble ascents and descents. I don’t respond particularly to “Ondine” and “Le Gibet”, but “Scarbo” was written to be one superhard showpiece, and I’ve never heard better than the one from this young Canadian.

Comments Off on The Roundedness of Tony Yike Yang