A vivid semi-staged performance of his first Broadway show, On the Town (1944) made the first big splash in celebration of the Leonard Bernstein centennial at Tanglewood with Boston Pops, Keith Lockhart conducting and narrating, and a cast of extraordinarily talented singers and dancers on the stage of the Koussevitzky Music Shed Saturday. The show had been performed in Symphony Hall during Pops, but the Shed seats about twice as many audience members, and the clear, cool evening attracted a large lawn crowd as well.

On the large stage, substantially filled with the world’s largest and classiest pit band, the Boston Pops, weighing in at roughly two-and-a-half times of a typical Broadway ensemble, the alert and knowing Lockhart also effectively delivered the concert narration which Betty Comden and Adolph Green had devised for events like this.

The actors, singers, and dancers worked from the front of the stage, where the lighting design (Patricia Smith) separated the characters in the show from the orchestra, and crew members adroitly deposited and removed essential if minimal scenic elements. In this fluid, largely open space, the show played smoothly and effectively in the wonderful 1940s period costumes by Michael Krass under the direction and choreography of Kathleen Marshall and her assistant David Eggers. The miking of the singers worked well in relatively dry space.

Composed during WWII, the show tells of three American sailors who have 24-hour leave from their ship docked at the Brooklyn Navy Yard. The visit to New York is a first for all. The basic idea of the show came from a ballet, Fancy Free, that Bernstein had composed shortly before for Jerome Robbins. (Those interested can view a New York City Ballet production of the half-hour work.) The ballet had been a smash, breaking attendance records at the old Metropolitan Opera. Oliver Smith urged Bernstein and Robbins to turn it into a show, and the composer insisted on bringing in his friends Betty Comden and Adolph Green to write the book and lyrics. The theme is the same, but the treatment and the music were completely different. Yet the show was full of music—not only the songs, but also, a large number of dances for virtually everyone in the cast. This came as no surprise, since Robbins was to choreograph the show as he had the ballet that suggested it. Many of the dances are fantasies representing the dreams of the characters (an “Imaginary Coney Island” contrasts with the later “Real Coney Island”). In the Tanglewood performance, some of these extended dance numbers were performed simply as orchestral interludes, allowing Bernstein’s wonderful rhythmic and emotionally evocative music to shine on its own. (It’s worth noting that, unlike most Broadway composers—Victor Herbert and Kurt Weill being rare exceptions—Bernstein composed the dance music himself, which is only to be expected, since he had already composed a full ballet.)

The actors cast for On the Town all impressed. From the first explosion of the three sailors at 6 AM (the start of their 24-hour leave), Andy Karl (Ozzie), Christian Dante White (Chip), and Brandon Victor Dixon (Gabey) pulsed with energy as they planned their visit to the metropolis and their search for young women to date (“New York, New York”). Each man had a fine voice and danced exuberantly. Each had a plan for the day that differentiated his personality. The three women they ended up meeting and falling in love with also brightly differentiated themselves, each making an excellent match to her sailor. 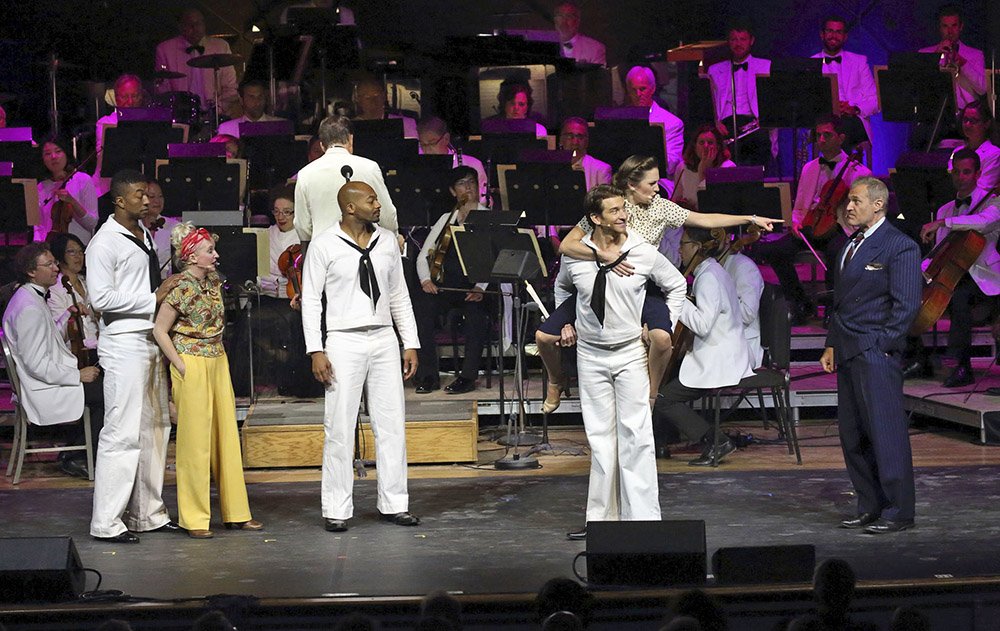 Megan Lawrence (Hildy Esterhazy, taxi driver) wouldn’t take no for an answer when she told the innocent Chip that his guidebook was sadly out of date and none of the things he wanted to see was still around. Her insistent alternative is “Come up to my place”—which Chip eventually does.

When left on his own, Gabey realizes that “A town’s a lonely place” when you don’t know a soul and are looking for love. A bluesy lament, “Lonely Town,” followed by a pas de deux, is one of the emotional highlights of the show.

Ozzie went to the Museum of Natural History, where he encountered Claire de Loone (Laura Osnes), an anthropologist immersed in passionate study of “modern man” and finding Ozzie a perfect example. Their mutual attraction turns into a song in which they explain to each other how easily they get “Carried Away.”

Gabey is looking for a specific young woman—one he fell in love with from her picture on a poster naming her Miss Subways. Ivy Smith is not easy to find, but since she is taking voice lessons at Carnegie Hall, he tries there, and encounters her. Georgina Paszoguin, a soloist at the New York City Ballet, is an extraordinary dancer with a bright clear soprano, no thanks to her voice teacher, Madame Maude P. Dilly (Andrea Martin), whose lessons would seem to be not effective. Happily, Ivy and Gabey fall in love at first sight, but she can’t bring herself to tell him she’s supporting her singing, dance, and art lessons with a job as a hoochie dancer at Coney Island. They plan to meet at a nightclub that evening, but, threatened with losing her job if she takes the night off, she does not show up. When he becomes depressed, his sailor friends and their girls try to cheer him up. The singer at two different nightclubs (Martin in both cases) adds to their gloom with songs that climax in the refrain “I wish I was dead”. The friends try to cheer up Gabey on their own (“Ya got me”).

Throughout the day, Claire has been thoroughly enjoying herself with Ozzie, but they keep getting interrupted by Claire’s fiancé, Pitkin W. Bridgework (Marc Kudisch). He always “understands” when Claire explains why she and Ozzie are still running around the city together, although eventually he has enough and explodes in frustrated anger—before finding consolation with Hildy’s roommate Lucy Schmeeler (Megan Sikora), who suffers from a perpetual cold, which she passes along to Pitkin, cementing their relationship.

Gabey learns that Ivy is somewhere at Coney Island, and rushes off, still determined to find her. The other four, realizing that they have only two hours left on leave, sing one of the most touching songs in the show, (We’ll catch up) “Some Other Time.” Then they follow Gabey to “the real Coney Island”, where at just about the last moment he locates Ivy, and the two avow their love for one another.

Suddenly it’s 6 AM again, and the men are about to return to their ship when the girls rush in for a last hug and kiss, planning for more time together in the future.

The songs and dances of On the Town already revealed the Bernstein style clearly when he was just 26. The show was successfully revived on Broadway a couple years ago, although it had not been performed much in the intervening 60 years (even as several recordings by Bernstein and by Michael Tilson Thomas had brought the score to admirers). The audience at Tanglewood seemed to consist both of longtime devotees and relative newcomers making the acquaintance of this brilliant first step in musical theater by a group of youthful creators—Bernstein, Robbins, Comden, Green—all of whom went on to more successes.

But 74 years after the show’s premiere, this first example of its creator’s talents remains funny, effective, and touching. The Boston Pops, Keith Lockhart, and company did it up proud.