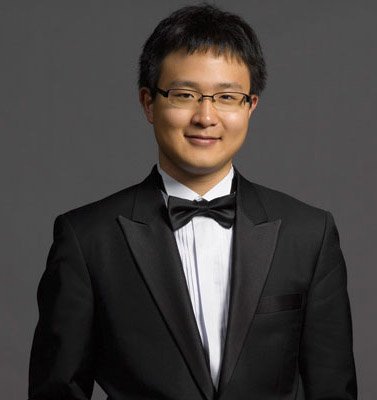 South Korean pianist Yekwon Sunwoo, winner of a number of competitions including the Van Cliburn, participated in a perhaps improbable but certainly enjoyable combination of genres: three medium- to large-scaled solo pieces alongside a piano quintet with the Brentano String Quartet Friday at the Rockport Chamber Music Festival.

A few decades ago, piano competitions apparently judged contestants less on their artistry and stylistic versatility than on how much technical firepower they commanded. Rockport’s handout included a pertinent statement from the competition’s President and CEO, Jacques Marquis (who was in the audience): “The competition is looking for someone who brings a unique artistic voice. Today’s young artists can play everything; technique is not an issue. We are looking for an artist who has something to say, a vision to share with the public . . . programming ideas, cohesion, stamina. For the Final Round, chamber music focuses on their capacity to work well with other musicians: the way they approach and prepare the music together, and listen and respond in performance.” The mutual admiration between Sunwoo and the Brentano Quartet began with their collaboration at the 15th Cliburn’s chamber music round last year.

The evening had been slated to begin with Schubert’s Impromptu in B-Flat Major, Op. 142, No. 3, but in a seemingly spontaneous decision inspired by the great panoply of sunset colors then arrayed over the ocean as viewed through the stage’s great windows, Sunwoo elected to place the third piece first. While Schubert’s theme and variations would hardly have been out of place, the pianist’s choice was indeed fitting: Percy Grainger’s “Ramble on the Last Love Duet” from Der Rosenkavalier composed in crepuscular hues; the artist’s rendering employed a multiplicity of tone colors such as I have very rarely heard on the piano live or recorded. The Australian-American composer-pianist used the term “ramble” in the sense of “meditation” or “paraphrase” (much as Franz Liszt composed paraphrases for piano, based on various other composers’ operas) and reveled in the iridescent, amorous harmonies of Richard Strauss’s most beloved opera. Alternating between plush, velvety tone and glittering bitonal passages, Sunwoo decidedly achieved one of a pianist’s highest, and most challenging, goals: he made an essentially percussive instrument sing. His liquid runs dazzled and seduced, his feathering of the damper pedal (“half-pedaling” doesn’t begin to describe the effects he produced) was all but preternatural, and the variety of his articulation astonished the ear. The performer used this “ramble,” based on an opera whose central theme is spiritual and physical love, as a vehicle for his love of virtually every aspect of the physical process of piano-playing.

Schubert’s B-Flat Major Impromptu commences with a sweet and straightforward binary theme, with both halves repeated, which for my taste was here somewhat “interpreted” with unnecessary rubati, though my concert companion, a pianist as well, enjoyed Sunwoo’s phrase-caressing. For me, such tempo-stretching worked better in the variations, e.g., the coquettish second and delightfully skittery fifth. The composer certainly seemed to be embracing Romanticism by expanding music’s harmonic vocabulary in the dark, intense third variation in B-flat minor and lyrical fourth in G-flat major so the performer’s Romantic playing fit these beautifully. The coda following the fifth variation brought back the unadorned main theme, though now in lower-register chords suggestive of a chorale played with quiet warmth by brass ensemble, and functioned as a benediction.

It is a doubly intrepid pianist who tackles the dual challenges of Ravel’s La valse in its keyboard version: (1) its technical demands are perhaps second only to those of Gaspard de la nuit among Ravel’s keyboard works; (2) given the composer’s legendary talent for instrumentation, the pianist must do the utmost in “orchestrating” at the keyboard, especially as the work is best known as an orchestral tone poem. The annotator Keith Horner rightly emphasized the two contrasted stages in the work’s genesis, pre-World War I when Ravel intended to call it Wien (Vienna), envisioning it as an apotheosis of the Viennese waltz a la Johann Strauss, and after the war when he gave it its present title, reworking the earlier material as a “choreographic poem” and introducing much more sinister undercurrents that ultimately take over. Sunwoo proved fully equal to all these challenges, demonstrating electrifying technical prowess but also delineating the simultaneous impressionist and expressionist aspects Diaghilev described as “not so much a ballet as the portrait of a ballet, a painting of a ballet.” Again, the pianist’s pedaling was a marvel, notably in the lengthy introductory passage with glimpsed fragments of melody emerging unpredictably from primordial, deep throbbing. His highly varied articulations aided in suggesting the various instruments heard in the orchestral version: satiny legato for lush string tunes, sharp staccato chords for brass punctuation, and opulent arpeggios evoking the harps. Earlier on, Sunwoo gave us the effervescent charm of the Waltz King with trademark Viennese rubati; later these became exaggerated, deliberately distorted, as superficial glitter gave way to obsession and decay. As the notes so aptly put it, “The very bones of the waltz are laid out in front of us, picked over and fall apart, even as we listen.” One could hardly hope for a more skillful musical/medical examiner than this artist.

The Brentano Quartet—Mark Steinberg, and Serena Canin, violins; Misha Amory, viola; Nina Lee, cello—joined the pianist for the evening’s final offering, Dvořák’s cherished Piano Quintet No. 2 in A Major, Op. 81, allowing the Cliburn laureate to demonstrate his equally impressive facility for collaboration. Through the considerable number of transitions of mood, mode, and key in the first movement, the pianist and string players showed unfailing attentiveness to each other. In all the movements they maintained enviable unanimity and balance. The mournful birdcall motive that begins the second movement proved especially affecting as did the subsequent elegiac viola melody. After Dvořák’s unexpectedly furious middle section, the opening material returns, and the lamenting quality stayed foremost in the mind. The scherzo, based on the traditional Bohemian furiant dance (not implying emotional fury, merely a very fast tempo, skipped along merrily, with piano and first violin exchanging the main theme. What seemed like a much-contrasted second theme, relaxed and blissful, soon became recognizable as a dreamy development of the main theme, though much slower and in a different key. After the return of the movement’s opening theme, the artists built to a bravura conclusion. The finale, like the scherzo, has a jaunty main theme and, though thoroughly enjoyable, seems at first of less substance than the first two movement. However, as before, the composer takes us through a varied series of moods and styles, and given this highly sympathetic performance, it seemed to take on more gravitas as it proceeded. Certainly, the final section, whose energy appears to peter out as though dozing off before an extended accelerando to the fastest tempo yet, is calculated to “go out with a bang,” and it most definitely did so. Considering this performance was only the second collaboration of Sunwoo and the Brentano (the first having been at the Cliburn), it boded very well indeed for future collaborations

Comments Off on Firepower and Artistry Well Joined