On Friday night at the Rockport Chamber Music Festival, the pianist Stephen Prutsman offered “Bach and Forth”: a recital interspersing Bach—mostly selections from Book II of the Well-Tempered Clavier—with other music ranging from Rameau to traditional music from Rwanda. On paper, the program elicited curiosity and some degree of skepticism: what would emerge from its rapid-fire eclecticism?

Opening with Book II’s Prelude and Fugue in C-sharp Minor, Prutsman established himself as a worthy Bach interpreter, regardless of the framing. Throughout the evening he gave the Preludes and Fugues unusually flexible, expressive treatments that didn’t sacrifice clarity or lose trajectory.

The first interpolation was Rameau’s La boiteuse (The Lame Girl), a brief, descriptive piece by Bach’s French contemporary. It literally limps along, painting a simple musical picture in contrast to the Well-Tempered Clavier’s more powerful abstractions.

Next, Prutsman tagged the Adagio sostenuto from Beethoven’s “Moonlight” Sonata onto Bach’s Prelude and Fugue in G-sharp Minor. The radical simplicity and circularity of Beethoven’s slow movement offered another kind of contrast, and the fog-veiled sunset over the bay, seen through Shalin Liu Performance Center’s rear window, provided an atmospheric backdrop.

With Wagner’s Liebestod from Tristan und Isolde (arranged by Liszt) and Debussy’s Ondine, the program began to lose its grip on coherence. The harmony and style of keyboard writing in these pieces is so far removed from Bach that their introduction—nearly without pause—proved jarring, and to return to Bach so quickly after hearing them felt like some kind of whiplash.

The following three pieces, however, proved to be the most successful stretch of the evening. Prutsman sandwiched the Musette from Schoenberg’s Op. 25 Piano Suite between the Gavottes from Bach’s Sixth English Suite and the Book II Prelude and Fugue in C Major. Schoenberg riffs on the Baroque dance suite, bridging naturally between Bach and more Bach. My concert-going companion, no lover of the Second Viennese, said it was the best Schoenberg he ever heard.

After intermission, Prutsman added his own arrangements of jazz, gospel, and non-Western music to the mix. He also swapped his suit jacket for an untucked shirt, multi-colored with a paint-splatter pattern. It was an odd signal if we were intended to take this music as seriously as the classical offerings on the first half. And if that was not the intent, then it was odd to have Bach still hanging on as the recital took a risky turn toward try-hard territory. 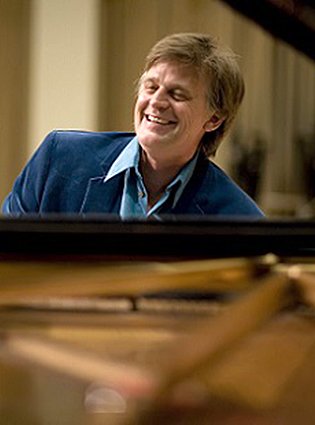 Charlie Parker’s Ornithology fit reasonably well before the G-major Prelude and Fugue, which picked up some joyful rhythmic swing. Govina, a piece by Purandara Dasa (1484–1564) from the South Indian Carnatic tradition, led into the slinky F-major Prelude and Fugue, but any musical resemblance felt incidental rather than meaningful. The transition from an overly long rendition of the Uzbek folksong Galdir into the F-minor Prelude and Fugue drew chuckles from the audience—perhaps amused, or perhaps uncomfortable.

Prutsman embellished Walter Hawkins’s Goin’ Up Yonder with Keith Jarrett-esque grimaces and undulations (mostly absent in other pieces), which made any return to seriousness basically untenable. Nonetheless, Prutsman pressed on with the C-sharp Major Prelude and Fugue, followed by Amaliza, a Rwandan song in praise of a mother goddess, built around questions and answers between high and low registers. This offered a point, perhaps, against which to consider the presence of divinity in Bach’s music (as Pierre Akendengue and Hughes de Courson have done with their Bach to Africa CD, which mixes Bach with music from Gabon). But Prutsman’s intentions remained hazy as he ended his recital with the Prelude and Fugue in E Major. The concert would have benefited either from being more demonstrative in its connections, or from being more excursive—taking Bach as a point of departure rather than a continual point of return.

Benjamin Pesetsky is a composer and writer based in Boston.

Comments Off on Bach in the Mix Gives Mixed Results