Rockport Chamber Music Festival presented a fairly new piano trio consisting of three longstanding musical heavyweights as its third act. The Montrose Trio, comprising pianist Jon Kimura Parker, violinist Martin Beaver, and cellist Clive Greensmith, formed in 2013 upon the cessation of the Tokyo String Quartet’s long run.  Beaver and Greensmith had been its first violinist and cellist. Parker, a frequent collaborator with the quartet, took up the opportunity to continue the association in a different idiom. For its Rockport debut, the threesome came up with one less-heard work set alongside two Romantic repertory standards, one of which called on the assistance of Shiffman as violist.

The outlier, Joaquin Turina’s 1933 Trio No. 2 in B Minor, op. 76 bears many traces of his student days in Paris, notably an amalgamation of Franck and Ravel with an unmistakable Spanish flavor. In three fairly short movements, it offered appetizing tapas before a much heavier meal. The Montrose cultivates a robust, intense sound, but can dial it back, as in the fleet-footed scherzo featuring Beaver’s bravura tremolo muted passages. The finale is somewhat more substantial, in an episodic French structural way, with Parker’s heavy octave passages lending gravitas.

Mendelssohn’s Trio No. 2 in C Minor, op. 66, from the fullness of Mendelssohn’s maturity in 1845, nevertheless stands somewhat in the shadow of his first trio, op. 49, written six years earlier, which arrived with phenomenal éclat and proved to be an enormously influential. Still, the substantial second trio forms a logical introduction to the Schumann trios that began coming out two years later. The first movement holds great interest for its intensity and motoric Bachian drive (and an intriguing resemblance to the finale of Brahms’s C Minor Piano Quartet, of which more later). Parker brilliantly negotiated the propulsive passagework, while Greensmith’s solos on the inevitably lyrical second subject were full of early-Romantic ardor. Adumbrations of Brahms continued in the coda. The slow movement inhabits the world of the Songs Without Words, but with a Schubertian pang, rendered by the players with paramount sweetness and pathos. The scherzo, a paradigmatically elfin bit of Mendelssohniana, is perhaps not quite as infectious as its counterpart in the First Trio, but such a movement never fails to please. In its one slight miscue, the Montrose could have subtracted some weight from the trio (that is, the B) section. The finale is a true harbinger of Schumann, held in check by Mendelssohn’s formal elegance and the unmistakable personality of its melodic content. The introduction of a chorale-like melody, reminiscent of the Old Hundred that is the usual tune for the Doxology, brings yet another foreshadowing of the Brahms C Minor Quartet, though with a different (and somewhat inscrutable) affect; it deepens and complicates the emotional range of the movement, which the Montrose executed with panache and grit.

We take a slight detour now to talk about stage presence and attitude. From his introductory remarks before the concert it was clear that Shiffman’s is a much different personality from that of his predecessor as Music Director, David Deveau. While Deveau’s introductions tended to be gracious and slightly formal, Shiffman appears considerably more laid back and jocular. He is also given to a degree of badinage as a performer, as at the end of the intermission when he joined the trio for the Brahms Quartet No. 1 in G Minor, op. 25. As the group came onstage, Parker asked that the stage lights be turned up more so he could see the music better. Shiffman shrugged and, nodding at the other string players, said, “We all memorized our parts.” This got somewhat turned around on him as, at a critical juncture in the slow movement, he broke a string. He shrugged again and said, “even with a memorized part, I need all the strings to play it.” As he left the stage to effect the necessary repair, Parker shot back, “well, I’ve got lots of spares here.” And then, in a display of consummate showmanship, instead of presiding over a long awkward silence while Shiffman re-strung, Parker embarked on a disquisition on the subject of breaking strings (it happens on pianos, too, though the consequences aren’t nearly as severe as for bowed instruments). Unanticipated moments like this are one of the joys of live performance. 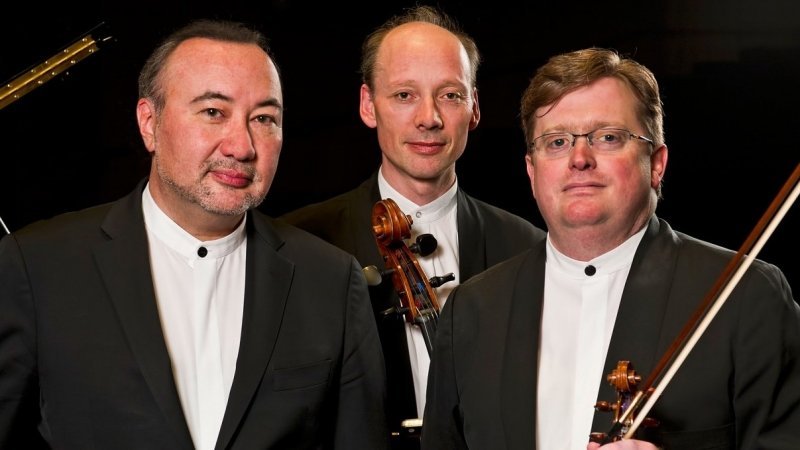 The Brahms First Piano Quartet, much beloved of general audiences for its abundant lyricism and Gypsy finale, and by cognoscenti for its tight motivic integration (Schoenberg arranged it for orchestra; he shouldn’t have), got a robust and full-blooded reading. The first movement, a bit brisker than usual, was strong on continuity, without the extraneous pauses one sometimes hears. The downside of that is a slight feeling of breathlessness, but we’ll take it.  The scherzoid second movement was equally intense and snappy, although here and there they paused for rubato phrase endings, which to judge from their smiles and glances went just as they had hoped. The slow movement went, by and large, for gemütlich lyricism rather the mysteriousness with which some performers imbue it, and, mishap aside, Shiffman excelled in the sweetness of his upper register playing (always a hard ask for a viola), while Parker’s crystalline marcato enhanced the march-tune middle. The finale featured superb pizzicato even as the group jumped on to all the principal tunes, relaxing elegantly in the sentimental passages. It all ended with a super-charged rush, bringing the house to its feet.