If semiosis defines the process of signification in language or literature, and signification constitutes the representation or conveyance of meaning, then the Semiosis Quartet fearlessly, efficaciously, and  fully signified at the New School in Cambridge on Friday.

“New music” falls short of describing Friday evening’s concert in the living room of the old house on Lowell Street less than crammed with avid listeners. A sudden loud banging at the door and a male voice yelling obscenities, however, was not part of the quartet’s plans.

The opener Missy Mazzoli’s Death Valley Junction reflected on a postmodern subjectivism, which Semiosis barely vivified. In-the-moment glissandos yowled with motorized bowing, both denying any real sense of expectancy. This could have been the composer’s intention, but Semiosis’s overplaying may also have played a part. Semiosis came near to reproducing the piece’s simple chord structure of triads continually being reshaped as if they were rubber bands. Semiosis seemed in warm-up mode as did Mazzoli’s writing.

Everybody was wondering what was going on. We were informed that a man threw a fit when he was not allowed to enter the room while the performance was going on.

Next came honking from the parking lot with Semiosis members running to the windows. They caught the license plate number. Eventually, it was decided not to call the police. Better to continue on with the concert. Stranger still, the would-be intruder was stopped by the Cambridge police just down the street!

Fantasia on the Theme of Plum Blossoms from Shih-Hui Chen reminded of earlier string quartet writing of European descent, at times engaging in flirtations with slow motion, that popular device from the “international style.” Pentatonic signs appeared amidst phrases that frequently worked loose in more chromatically conceived modes. Simulators of the plucked Chinese instrument, the pipa, found their way to the viola. Try as they did, and it certainly appeared that Semiosis had this piece down pat, little plum or blossom could be seen.

At intermission, the violist could be heard saying that the untoward incidents left her “freaked out!”

Aaron Jay Myers introduced his composition, drawing up the bizarre and the cultish more as motivation than as substantive fodder. Revisiting an array of once new compositional zones might have been Myers’s method of choice for his meaning of “I’ll Swallow Your Soul.” Conscious shifts from one device to another, from struggle to ennui, from nonfigurative to movie soundtrack, informed the lengthy survey. And again, the recently founded young Semiosis Quartet sparked, roared, and lyricized, doing its level best to transfuse the stream-of-conscious cultishness with lifeblood. 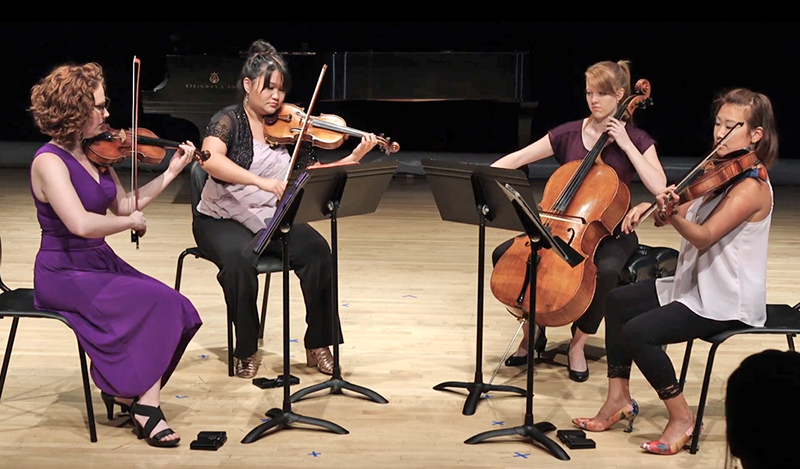 “Black is the Color of My True Love’s Hair” is the out-and-out signifier with which Steven Snowden began his Appalachian Polaroids. A recording of a timeless traditional folk melody sung in back country dialect failed again after “take two.”  With the recording now working, Americana signed and stamped itself all over Snowden’s short excursion. Finely attuned to his picturesqueness, Semiosis droned, shifted into railroad chugging rhythm, and glorified the melodic duets haunted by the folk song. Polaroids cadenced with a touching nostalgic glance. Snowden’s music possesses a naturalist’s feel, and with that, Semiosis created sonic folkish wonderment.The astonishing Semiosis players are Nicole Parks and Kyra Davies, violins; Lauren Nelson, viola, and Allison Drenkow, cello.