What do you do when you’re about to start a dress rehearsal at 3 PM on a Friday afternoon in preparation for an 8 PM curtain, and you learn from a construction engineer that the venue closed down immediately and that your entertainment license from the city of Boston has been canceled? That quandary faced conductor Lina Gonzalez-Granados last Friday afternoon when she thought everything was ready for her group’s widely advertised appearance in the Villa Victoria Center for the Arts in South Boston. Pleas to allow the hall to remain open over the weekend so that scheduled event could go forward were unavailing. The building is surrounded by scaffolding for repair work, but until this weekend concerts and other events had been proceeding normally. Apparently, though, something had happened to render the hall unsafe for public accommodation.

It was certainly too late to find an entirely new space, and too late to notify potential attendees of the change. A cancellation would disappoint all concerned. But could the presenter move the concert a few hundred feet outdoors to the neighboring O’Day playground and offer it to the public free of charge? This would require bringing chairs for an audience as well as for the orchestra and setting them up, arranging a large number of electrical cables to provide light for the music stands, to say nothing of hastily assembled tower spotlights to illuminate the entire area. If an anticipated rain were to begin, a cancellation would have ensued, since there was no overhead protection for the instruments and the music. And the temperature hardly reached that of a concert hall. But rather than lose all the effort put into preparation, they decided to go ahead with the out-of-doors option, and by 8 PM on Friday evening everything was ready as if it had been the plan all along.

The Colombian Gonzalez-Granados, who has studied conducting at the New England Conservatory and Boston University, founded the Unitas Ensemble in 2014 to concentrate on the largely unknown but diverse repertory of music by Latin-American composers. Raíces (Roots) focused on music of four remarkable Latina composers: Tania León, a Cuban born-composer and conductor long resident in the United States; Teresa Carreño, the brilliant Venezuelan pianist of the late 19th century; Lucía Caruso, an Argentine-born composer and pianist; and Gabriella Lena Frank, a mixed Peruvian/Chinese/Lithuanian/Jewish composer resident in California.

Owing to the changed circumstances, the limited light, the cooling temperature, and the possible threat of rain, the conductor announced at the beginning that the program would be performed straight through.

Tania León’s Indígena is an energetic eight-minute piece for chamber orchestra composed in 1991 following a return visit to Cuba. The score aims to present a vivid mixture of indigenous sonorities suggesting a lively modern urban environment with a Latin tinge.

In her own lifetime Teresa Carreño (1853-1917) was one of the most famous pianists in the world. But she was far more than that. She spent part of her early career as a singer. The composer George W. Chadwick heard her as Zerlina in Don Giovanni in Boston in the late 1870s. Though her vocal career was relatively limited, she became an active composer, as well as a much-married femme fatale. One of her most distinguished piano students was the composer Edward MacDowell.

The Carreño composition offered here was a four-movement Serenade for string orchestra composed in 1895 and apparently never published or performed in her lifetime. It is a lush romantic score for full string orchestra with the four movements expected of any large orchestral work of the time. All of the movements are engaging with lovely Romantic sounds suggesting a composer fully at home with the stringed instruments. For my taste the last movement sounded a little dry and mechanical compared to the lyricism and elegance of the earlier movements, but the Serenade is certainly a fine discovery and a score worthy of performance.

Lucio Caruso originally composed Titania’s lullaby, “Ye spotted snakes with double tongue,” from A Midsummer Night’s Dream for orchestra and choir, for performance in the Holy Trinity Church of Stratford-upon-Avon (where Shakespeare is buried) for the 400th anniversary of the composer’s death. For the present performance the work was arranged in a smaller scope by the composer’s husband Pedro H. da Silva, for solo Portuguese guitar with orchestra. Pedro da Silva played two other Shakespeare songs, drawn from Much Ado about Nothing,on solo Portuguese guitar. All three songs were very attractive indeed, although it would be nice to hear the texts as sung, without which they don’t make the full effect as songs. (The composer read the song lyric before each performance.) 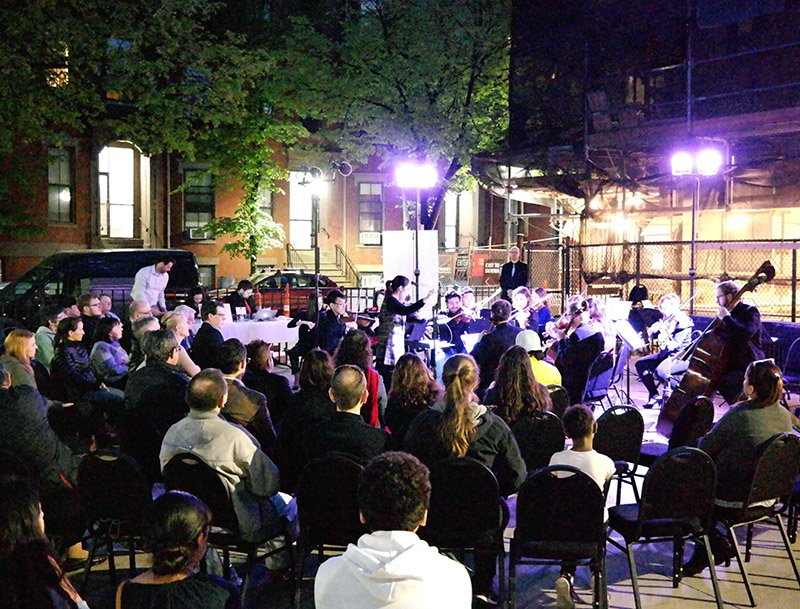 An hour into the show, the temperature had dropped toward the mid-50s. Members of the orchestra could be seen to be visibly shivering and it became more and more difficult to maintain the tuning of the stringed instruments. Let it also be said that members of the audience were shivering, too. Gonzalez-Granados announced that, owing to the temperature, and out of concern for the safety of the instruments, the final piece would be omitted. Though this was an unfortunate loss, it was clearly sensible. Almost immediately, however, she announced that they would play one movement, the finale of Gabriela Lena Frank’s Leyendas (Legends), subtitled “An Andean Walkabout.” “Coqueteros,” a flirtatious love song by men who seem to strut as cocks of the walk with showy élan, brought the house down and served as a perfect ending for a slightly abridged but very chilly program.

The evident difficulties of the evening did not dampen the audience’s appreciation. The repertory consisted of music that clearly deserves to be heard often and composers who should be better known. Kudos to Gonzalez-Granados for assembling this fascinating program and remaining stalwart in the face of the day’s problems to provide this colorful and welcome entertainment.