The first group explored works from the English Renaissance: two in Latin and two in English. The beloved Haec dies (This is the day the Lord has made) of William Byrd had a wonderful rhythmic thrust, and the triple-meter passages fairly danced. After rearranging themselves from a single semicircle into two concentric ones, the singers gave a ravishing rendition of Henry Purcell’s “Thou knowest, Lord, the secrets of our hearts”, reverent and featuring well-calibrated balance and exquisite blend. Byrd’s Civitas sancti tui (Your Holy City has become a desert) skillfully conjured desolate images by using virtually no vibrato and making only gentle swells while emphasizing the work’s simpler counterpoint. “O Pray for the Peace of Jerusalem”, by Thomas Tomkins, was gently cheery, and the trebles’ high tessitura combined with considerably more vibrato made the texture slightly top-heavy without the lower voices being covered.

Secular then mixed with sacred in a set of mostly French music of several epochs. Though the first was the work of English composer Thomas Ravenscroft, there is a bit of “Franglais” in every stanza of the drinking song “We be Souldiers Three.” Chanticleer performed this from memory as they changed configuration during the singing (from double semicircle to single) and amusingly became more “inebriated” as it progressed. Clément Janequin’s La guerre (translated as “The French Skirmish”) was the singular display piece of the evening. Depicting a historical 1515 battle, the narrative sections were commandingly sung, but of course it is the onomatopoetic sections that the work is known for. We could hear, distinctly, the piping of fifes, beating of drums, snarling sackbuts, and stirring trumpets and clarions. Additionally, these gifted singers remarkably rendered the sounds of weapons and outcries: clashing swords, shouting soldiers, squawking falcons, whizzing arrows, advancing cavalry, etc. The French forces win the day, of course, and the final acclamation of King François (Victoire au noble roy François) was deliberately ultra-nasal, prompting me at least to wonder if Janequin actually intended this effect to verge on the comic. At any rate, La guerre was a tour de force in every sense. The group was completed by two Medieval pieces: Lamentatio sanctae matris (Lament of the Holy Mother of Constantinople) by Guillaume Dufay (c. 1397-1474) and the traditional troubadour song L’homme armé (The man at arms). The Lament’s aching phrases had a somber beauty, and the bare fifths that rounded off many cadences were especially affecting for their gentleness and immaculate tuning. The troubadour song opened with the tune whistled in unison but was also notable for its attractive phrasing and unfailing precision.

As the ensemble shifting to Russian, we heard two arrangements of traditional soldier songs and an original piece by 19th-century composer Mikhail Glinka. “Battle of Borodino,” as arranged by Vladimir Mantulin, combined elements of Romantic and folk music, with a generous helping of testosterone (one could hear the origin of the 20th-century Red Army Chorus style). Though it didn’t have the vocal sound effects beloved of Janequin, this piece also effectively told the story of a battle. The combination of rich harmonies and fairly prominent vibrato caused some minor oddities of intonation in the last two verses, but it ended powerfully with a most emphatic stomp (“We had Borodino”). “Nightingale, You Little Bird” is a soldier calling out to his sweetheart Natasha—possibly identifying her with the nightingale—from whom he is separated by military duty. The elegant singing was punctuated by masculine shouts as well as birdsong effects, e.g., upward-glissando whistles. Continuing the idea of separation, Glinka’s “My blood is Blazing with Desire” was suffused with yearning harmonies, and the musicians’ envisioning of a nocturnal tryst was clearly conveyed.

The fourth section comprised two works by living Americans. Chanticleer has commissioned and premiered several prior works by Mason Bates (b. 1977); Friday we heard his “Drum-Taps,” a joint commission by Chanticleer and the Kennedy Center, based on a pair of Walt Whitman’s Civil War poems. The first section narrates the painful departure of a young soldier from his hometown as well as from his beloved family; the second, more anguished still, describes the awful arrival of a letter with unfamiliar handwriting to inform the family of his death. In the opening passages Bates paints the mood of inevitability with snare-drum effects and by using harmony eschewing “sweet” thirds in favor of more martial seconds, fourths, and fifths. A more Coplandesque language portrayed the beauty of the Ohio village in autumn, too soon yielding to the buzz of increasing apprehension as the family is summoned to read the letter. The ensemble rendered with painful immediacy the family’s initial reluctance to believe the news, grudging acceptance, and finally unadulterated grief. The closing lines, wherein the mother longs to follow her son to the grave, were wholly devastating. “Our Beautiful Country,” drawn from the opera Cold Mountain by Jennifer Higdon (b. 1962), made a logical successor to Bates’s work: setting a mournful text by Gene Sheer to warm, rich harmonies, it is both lament and eulogy. The text is “sung” by dead soldiers, buried in “this scarlet soil,” but Higdon allows us some comfort by using essentially Romantic sounds of considerable beauty and warmth. The lower voices were especially rich in this tribute both to the fallen and to the surrounding idyllic scene.

Following intermission, the audience was granted an emotional reprieve with some lighter 20th-century fare. Comment allez-vous?, by Murray Grand, offered a charming spoof of an introductory French course (text by Blossom Dearie), which interspersed many useful conversational phrases with rhyming English phrases that were amusing, naughty, flirtatious, and flattering. Creating the full-on jazz band effect involved not only flawless tuning but oral “percussion.” Chanticleer’s rendition was suave, cool, elegant—and funny! “My Buddy,” by Walter Donaldson, looked back to the Russian group’s theme of the separation of soldier from sweetheart. Opening with a vocalise on “oo,” the singers enjoyed the slinky close harmonies. The piece was largely a tender countertenor solo with a gorgeous choral tapestry behind. The exceedingly lush harmonies dropped slightly in pitch toward the end, but the prevailing effect was quite seductive. The final jazz number was the Andrews Sisters’ classic “Boogie Woogie Bugle Boy,” in tenor Brian Hinman’s arrangement. One cannot doubt that this display piece must tempt an arranger to go for broke, and to be honest, when Hinman’s version worked, it was huge fun, but there were also significant stretches when its sheer ambition constituted a major obstacle. Much of the middle portion of the words was unintelligible (even when one referred to the printed text) due to the overly florid texture, though the boogie-woogie bass always effectively anchored the proceedings. The coda, however, an extended vocalise with parallel dominant seventh chords, was thoroughly entertaining and apparently effortless (though no doubt very challenging to sing). Pete Seeger’s standard “Where Have All the Flowers Gone?,” a fusion of folk song and blues as arranged by countertenor Adam Ward proved to be another instance of less could have been more, although here, the arrangement less often muddled the words. However, the aggregation of choral devices—descants, over-frequent passing of solos from one singer to another, key changes, etc.—robbed it of its folk-song simplicity as it laments all the varied losses from war. The final chord, though, featuring a bass note of Russian depth followed by a quiet but pungent tone cluster in the upper voices, did move us.

Probably the most challenging number of the evening for the audience, “. . . a silence that speaks” by John Musto (b. 1954) with words by Archibald MacLeish, opened the final group. In it, the war dead plead to the living to give their deaths meaning and bring about an end to the war. Musto’s harmonic language is tonal but fluid, with pulsing accompaniments to solo melodies, and he responds to this moving text with his own intensity. Chanticleer’s quiet power made the final line one of the most haunting moments of the concert: “We were young, they say. We have died. Remember us.”

The text of H. H. Parry’s “My Soul, There is a Country,” an anthem familiar to Episcopalian/Anglican choirs everywhere, describes the wonders of the afterlife and a security and comfort unknown to denizens of earthly existence; it made a programmatically apt closer. With their trademark sensitivity to text and range of colors, the musicians made something distinct of each stanza (sometimes even parts of stanzas), yet they knit the entire garment convincingly. In the final verse, after tapering down momentarily, they built to a resounding final phrase. 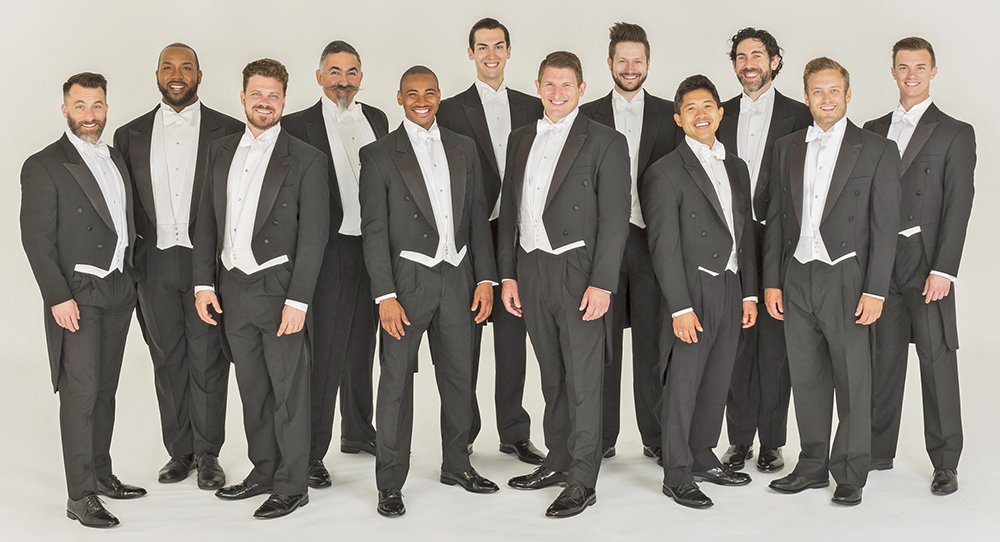 Chanticleer satisfied the intense demand for an encore with an affectionate tribute to previous music director Joseph Jennings by singing his arrangement of the spiritual “Steal Away.” His dreamy, soulful version with imaginative harmonies inspired the singers to give their all. From the heartfelt solo singing to the plush warmth of the choral backdrop, the show was unforgettable. Those at Trinity Church on Friday would certainly like to see Chanticleer in Boston much more frequently.

Comments Off on Twelve Men Sing of War and Peace