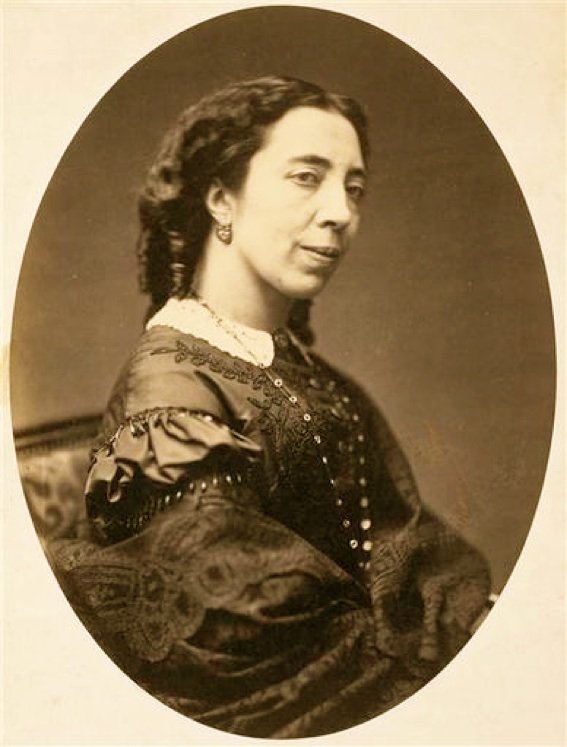 Here’s a cheer for the Cambridge Chamber Ensemble’s happy rediscovery of a small masterpiece by a very good forgotten composer, Cendrillon by Pauline Viardot-Garcia, which I heard Friday at Warehouse XI in Somerville. There will be two more performances on Sunday [tickets HERE], heartily recommended.

Pauline Viardot-Garcia (1821-1910), born in Paris of Spanish origin, began her career in the shadow of her older sister Maria Malibran, the great soprano. She had intended a career as a pianist, studying with Liszt, and took lessons in theory and composition with Beethoven’s friend Anton Reicha; but following Malibran’s early death her mother urged her to make a career as a singer. And what a career! She sang in a wide variety of operatic roles from Orpheus and Leonore to Lady Macbeth, and created the role of Fidès in Meyerbeer’s Le prophète (1849), singing 200 performances to enormous acclaim; she gave private recitals with Chopin accompanying at the piano, including old Italian repertory and Don Giovanni; she sang the premiere of Brahms’s Alto Rhapsody; Saint-Saëns dedicated Samson et Dalila to her, as did Schumann his Heine songs, op. 49; in 1843 she met the Russian writer Ivan Turgenev, author of Fathers and Sons, and enjoyed an amicable ménage à trois with him and her husband, Louis Viardot (by whom she had three children, all of whom became musicians), that lasted until the death of both men in 1883. In 1869 she composed an opera, Le dernier sorcier (The Last Magician), with libretto by Turgenev, which was produced in three cities. It’s not surprising that she was fluent in six languages, including English and Russian, and of course Spanish. Following her father’s vocal method, she became a renowned teacher who included Désirée Artôt and Marianne Brandt (the first Kundry) among her pupils. She died at the age of 88, and just to help to place her historically, that was when the world premiere (in Paris) of The Firebird was in rehearsal.

For all this accomplishment, which included the friendship and collegiality of nearly all the leading European musicians of her time, Viardot-Garcia never considered herself a serious composer, and yet, according to the New Grove, “yet her work was highly professional.” I prepared for this performance by listening to a recording of her songs, sung by Karin Ott (CPO 999 044-2). Twelve of these are her own work and are all delightful; the CD also includes four of some dozen arrangements she made, with French texts, of mazurkas by Chopin, who encouraged her in the transformations.

A late work (1904) composed as a “salon opera” for home performance and consumption, Cendrillon deals with the Cinderella story in a simple and light-hearted manner in three brief acts adding up to about 76 minutes of music, with interpolations. The Cambridge Chamber Ensemble, of 14 young professional singers, gave an inspired performance in English with piano accompaniment in the workshop space just off Union Square in Somerville, a very live and even loud room for an audience of about 60. The singing overall was very good even when the enunciation was unclear, and Alexandra Dietrich’s staging, including choreography and mime, was particularly convincing. Among the singers, Kathryn McKellar (Cendrillon), Jeremy Ayres Fisher (Prince Charming), Junhan Choi (Baron de Pictordu, “twisted peak”), and Fran Daniel Laucerica (Count Barigoule) proved most noteworthy. If the spoken dialogue failed to register because of excessive rapidity or obscuring stage noises, it hardly mattered. The handout mentioned that the scene had been reconfigured for “newly-independent Mexico, 1822” on the Día de los Muertos; I don’t know what the original libretto specified (I wondered why it wasn’t celebrating the Mexican victory over France in 1862, the Cinco de Mayo, which happens to be today). The “Day of the Dead” explains why Cendrillon scattered rose petals in front of the altar at the rear of the stage, with the image of her dead mother, and why the Fairy Godmother, Gyuyeon Shim, was elaborately and brilliantly made up as a calavera (skull) with rows of stitched teeth along her cheeks. Other roles were nicely sung by Stephanie Hollenberg (Maguelonne), Jaime Hartzell (Armelinde), and Brian González (the Footman). Juliet Cunningham, who had to contend with the tactile peculiarities of an electronic piano behind a screen, coordinated the ensemble, quite well; it is likely that no orchestral score ever existed, but it would be easy enough to create one for production in a larger space. The  Theater Department of the University of Southern Maine lent the costumes; Erin Anderson did the spectacular make-up design.

The music itself included some notable interpolations, especially in the masked-ball scene of Act II, with songs by Barbieri and Gottschalk (in Spanish), plus Aennchen’s arietta from Der Freischütz (in German), plus Viardot-Garcia’s arrangements of parts of three Chopin mazurkas (I identified op. 6, no. 4; op. 7, no. 5; and op. 33, no. 4; there could have been others). All of these additions made for easy familiarity. But it was Viardot-Garcia’s own music that particularly stands out. The solo songs and ensembles could have been composed by Gounod or Chaminade; the harmonic idiom isn’t notably original, but the elegance is obvious and effortless. It contained some expressive chromaticism perhaps inspired by Chopin, and some unusual touches of modal harmony reminiscent of the early style of Fauré (who, apropos of nothing, was at one time engaged to Viardot-Garcia’s youngest daughter). But the Act II duet between Cendrillon and the Prince (“C’est moi! Ne craignez rien!” in the French score), as they dance alone on the stage, was perfectly expressive and deeply touching; this is fine music.

The Cambridge Chamber Ensemble brings to the public “performances of music from off the beaten path, music that is less familiar and that needs rehearing.” It may not be their only goal, but it’s an admirable one. On the basis of this Cendrillon by Viardot-Garcia,  I would happily hear more of her music — I felt the same feelings when I reviewed another Cendrillon, the one by Massenet (he too was a friend of Viardot-Garcia, and I’m sure he didn’t mind that she wrote one of her own), in these pages a couple of years ago, without ever having attended a performance of Rossini’s Cenerentola. Friday’s rediscovery of this forgotten opera is typical of the excellent variety of offerings in the Boston area. Maybe next year we can hear The Last Magician?