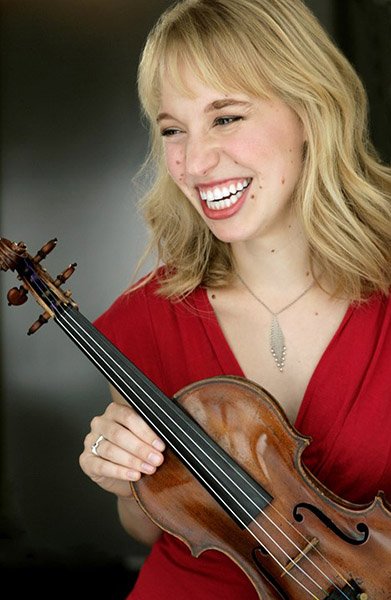 Versatile violinist Robyn Bollinger, a graduate of NEC and a recipient of a 2016 Leonore Annenberg Fellowship, treated a receptive Gardner Museum audience to a multimedia conversation and solo concert she created through that fellowship last Thursday. The evening began with an invitation to experience something personal. As she explained, her “Ciaccona– The Bass of Time,” also available as a DVD and a CD, reveals the history, characters and sounds of the ciaccona (and the closely-related passacaglia) for solo violin. The video [HERE] depicts the evolution of the ciaccona, from its folk beginnings to a fashionable dance, which when “forbidden” by King Phillip II of Spain, made it all the more popular.

Already a highly acclaimed artist, Bollinger made her debut at age 12 with the Philadelphia orchestra; her mastery of the instrument became manifestly clear in her chronological rendering of examples by Biber, Bach, Bartók and Berio.

Heinrich Ignaz Franz von Biber (1644-1704) composed and performed in Austria, though he was Hungarian. That he was peerless player in his day no doubt helped him craft the Passacaglia in G Minor, with its elegant phrasing. The bass in the Biber Passacaglia is clear, insistent and pure, riveting in each new variation. On a sonorous, year-old violin by the respected luthier Samuel Zygmuntowicz, Bollinger delivered each variation reverently.

As the Biber ended, Bollinger slowly lowered her bow, and the video resumed, introducing the great Johann Sebastian Bach Chaconne, which is a movement of Violin Partita no. 2, BWV 1004, for unaccompanied violin. The piece may have been written as an elegy for his first wife, Maria Barbara, who died while Bach was on tour. Full of health on his departure, she became ill and died while he was away, according to Bollinger, who narrates the video and adds extemporaneous comments. The sounds of the violin, like a keening voice, convey the profound stages of grief.

Another video interlude evoked Bela Bartók’s grace in the face of ill health and financial challenges in the early 1940s as a prelude to Bollinger’s rendition of the first movement of his Sonata for Solo Violin, Tempo di Ciaccona, an elegiac one permeated by Magyar folk tunes throughout the variations. Yehudi Menuhin, who was moved by Bartók’s difficult circumstances, commissioned the work in 1943. The Bartók sonata is so difficult that whole treatises have been devoted to it (see Oliver Yatsugafu’s Performance-Practice Issues in Bartók’s Sonata for Solo Violin). Again, Bollinger delivered.

Finally came the Luciano Berio Sequenza VIII, written in 1976 for Carlo Chiarappa, based on a “compass” of two notes, A and B, and which the composer himself described as “a tribute to that musical apex which is the Ciaccona from Johann Sebastian Bach’s Partita in D Minor.” Bollinger executed the piece with bright focus and luminous tone.

She honors her audience by invoking an exploratory mood that invites each listener to create relationships to the music through personal recollections. Bollinger’s unique approach as intellectual facilitator and translator endeared her to the audience, many of whom stayed for a post-concert Q and A session. The world will be hearing more from this engaging and original talent.

Julie Ingelfinger, a nearly life-long Cantabrigian, is a classically-trained pianist and congenital music lover. She enjoys day jobs as professor of pediatrics at Harvard Medical School, pediatric nephrologist at Mass General Hospital for Children and deputy editor at the New England Journal of Medicine.