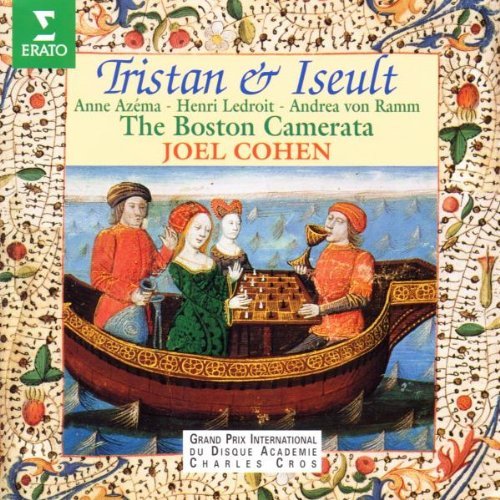 The names Tristan and Isolde (or Iseult) when linked together in a title, generally evoke a romantic Wagner opera that runs for many hours with intense musical content employing nearly constant chromatic harmonies. In the last few weeks Bostonians have had the opportunity to hear not only a substantial part of a Wagner opera at Symphony Hall, but also a deeply affecting presentation of its original 12th-century source material as a Medieval romance. Boston Camerata theatrically combined passages from original texts of the Middle Ages with musical material from the same era to tell the story in song and action. On April 21st and 22nd at the Pickman Concert Hall of the Longy School, Camerata’s artistic director Anne Azéma revived a Joel Cohen production from 1987. Its return was welcome indeed.

As presented here, the production drew upon two major literary sources—the old German poem of Gottfried from Strasbourg, who wrote his version of Tristan about 1210, and an earlier old French source from about 1170 by Thomas de Bertragne. These two versions contained some different plot elements, but blended together, they provide a complete version of the story, with Gottfried’s version drawn upon for roughly the first two-thirds of the show and Thomas’s version for the remainder.

Camerata sang the songs in the original languages, but printed the texts in English. Since Middle High German and French may perhaps be read by moderns familiar with the contemporary German and French languages, yet are essentially incomprehensible as spoken or sung, the printed words allowed a modern listener to catch at least part of the original languages and to follow the story. Further elucidating the plot, the bardic Joel Cohen spoke over his own lute accompaniment.

This medieval “opera” called for four major solo performers, all of whom splendidly represented their characters: baritone Sumner Thompson as Tristan; mezzo Anne Azéma as Iseult the Blonde; mezzo Clare McNamara as Brangane; and tenor Jason McStoots as King Mark. An audience who knows the story only through Wagner’s treatment may well be surprised to find a baritone as Tristan and a tenor as King Mark. But vocal ranges in the Middle Ages were far less extended, and there was no concept of “Fach” (vocal specialty). In fact, the recording made of the earlier 1987 production had a countertenor as Tristan. But as long as the parts are sung well and expressively—as they certainly were here—this expectation of certain vocal ranges is irrelevant. Each song, whether sung as a solo or (occasionally) duet, whether accompanied by an instrument or not, projected expressively the longing, the joy, and ultimately the heartbreak of the tale simply by virtue of the focus of the characters on their uncontrollable passion.

In addition to the four principals, we heard chorus made up of students from the Longy School of Music of Bard College, who had been studying Medieval song with Azéma for the semester; they took on various roles of mimed characters, members of the court, and so on. One of them, Catharine Cloutier, also played a brief solo role as the other Isolde, Iseult of the White Hands. Other choristers Carolyn Balkovetz, Christine Charman, Cameron Dobson, Caitlin Laird, and Grant Yosenick, sang, acted, and danced with distinction.

One imagines this production of Tristan & Iseult as given by a traveling troupe moving from one location to another in the 12th century, traveling light and therefore offering a show with a minimum of sets and costumes. Most of the barefoot players dressed in blue jeans and simple white shirts.

The stage furniture consisted of a lectern for the narrator, a seat for the musician, another chair placed toward the front and center for occasional use by actors in the performance. For the rest the atmosphere was evoked with a simple but very effective lighting plan (designed by Peter Torpey) on the almost bare stage. One could identify the principals by some additions to the basic costumes: Iseult sported a black gown with gold brocade, King Mark a coat of a somewhat military cut.

Another essential participant, the extraordinary Shira Kammen, performed on the vielle (a bowed string instrument) and the harp. Working without reference to music, she evidently had the entire musical score in her head, though possibly a small part of it was improvised. The vielle often provided a drone that underlay the sung melodies, or doubled the tunes. The harp provided contrasting sonority of plucked strings (along with Cohen’s lute).

Most of the musical content consisted of anonymous monophonic songs called “lais,” 17 of which were found in a French-language manuscript in the Vienna State Library. These strophic songs contain several stanzas apiece. Some other musical sources included songs by a diverse group of individual composers of the troubadour tradition, including Marcabru, Jean Bodel, Guiraut de Bornelh, and Adam de la Halle, as well as the ubiquitous Anonymous.

The sad tale of a passionate love that could not be, in this intimate setting, etched itself strongly into our hearts and minds.

Comments Off on Tristan’s Medieval Tragedy