A Far Cry was “off its game” Saturday, in an oddly cobbled together and unevenly executed program at St. John’s Episcopal in Jamaica Plain. Apparently inspired by a Neapolitan fresco at the Gardner museum, Saturday’s concert at its best, celebrated music of modest graces.

Scarlatti built his brief, three-movement Sinfonia from La Caduta de’ Decemviri out of the slightest of materials: 16th-note fragments tossed back and forth between divided violins in the outer movements, clashing descending scales in the slow middle movement. But Scarlatti has an exquisite ear for balance and scale; at not much more than five minutes long, it was just as long as it needed to be. A palate-cleanser it may have been, but one that demonstrated masterly craft.

“Masterly craft” is emphatically not what the 12-year-old Rossini displayed in his six String Sonatas from 1804. They are written for violins, celli and bass — no violas, apparently in a tribute to bass virtuoso Dragonetti who was in vogue at the time. The composer, later in his life, referred to the “six horrendous sonatas” (in the translation offered in Kathryn J Allwine Bacasmot’s notes) but the evidence provided by AFC’s performance of the Third, in C Major, suggests the composer was being far too harsh. There is nothing horrendous in this music: in fact, it is filled with good humor, a fine sense of simple melody, and already has certain twists of character that presage the opera composer to come. The piece is, however, quite stupid, in a truly pleasurable way. The opening movement is, for all its charm, the most perfunctory sonata movement you’ll ever hear; the exposition is quite enjoyable, but there is absolutely no need to repeat it. The development barely exists, and simply grinds to a halt before the recapitulation starts up as if born anew. The last movement is a brief set of variations on a good-natured but entirely undistinguished theme, highlighted by an absolutely wonderful opportunity for the basses to take center stage, where they made music that danced heavily with a deep resonance that could be felt in one’s nether regions, despite there only being two of them (bravo Karl Doty and Tony Manzo). There were also two solo violin variations, where Rossini attempts to squeeze just as many notes as he can into eight bars.

Also on the positive side of the ledger were three violin duets by Luciano Berio, which were placed between the larger works. All were very brief, and are part of a set of 38, all written to commemorate friends. On the basis of what we heard here, Bruno Maderna (number VI) must have possessed a tortured lyrical gift; Peppino di Guigno (number VIII) a sensibility for long, singing melody; and Lorin Maazel (number XXXIII) and elusive and combative nature. That sounds about right for Maazel, at least.

The “big work” of the day was a secular cantata, Calcante ed Achille, by Nicola Porpora, who is much better known for his tutelage of other composers (Haydn, primarily) than for his own compositions. At 25 minutes it was nearly half of this brief program and for the life of me I don’t know why the Criers chose it. I was initially annoyed that neither the notes nor the speech from the stage gave much insight into the scenario. It is an imagined argument between the seer Calchas and Achilles about one of the most horrible moments in Greek epic, the decision of Agamemnon to deceive his daughter Iphigenia into coming to Aulis ostensibly to marry Achilles, when in fact Agamemnon’s intent is to sacrifice her so that the winds will change and the army can go on to Troy. However, I could forgive this oversight (and the weird suggestion that we see the two participants as “pro wrestlers”) because Porpora barely connects the text to the music himself, and there’s not much else to hold one’s attention. The speed with which one forgets anything about Porpora’s opening sinfonia confirms just how wonderful Scarlatti’s opening piece was. Baritone Bradford Gleim and soprano Sonja Dutoit Tengblad used different strategies to attempt to enliven the experience. Gleim emphasized Calchas’ gravity, to the point of seeming more Wotan than Greek sage. This did provide a foundation of seriousness that allowed Tengblad to mostly disregard the dramatic scenario (apart from one half-hearted fist-shake), focusing instead on her brilliant passagework. They seemed to truly enjoy singing the final duet together. It is the best part, a rolling and swinging triple-time movement with no connection at all to the heavy-handed text (“By the will of the gods the strongest beasts stand at the altars; to save the sweet virgin you must remain cold-blooded”). One imagines Porpora knew his patrons would be well into the wine by the time this came around and didn’t really expect the thing to make sense. 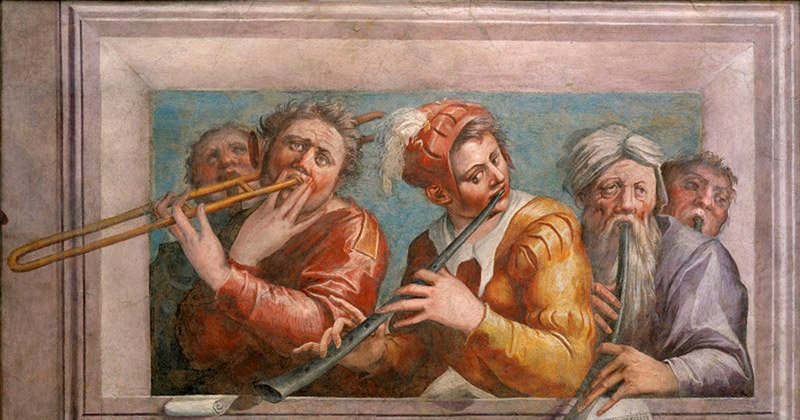 Finally, wedged among the Neapolitan offerings, came the winner of AFC’s Young Composers Competition, 14-year-old Adrian Ng’s Solstice Festival. Ng claims Hans Zimmer as his primary inspiration, he of the Pirates of the Caribbean soundtrack, and Ng’s not kidding. Over six-minutes we heard an uncannily expert essay in High American Commercial orchestral writing, full of pounding 3 + 3 + 2 rhythms and muscular melody, but not much else. One can forgive a talented 14-year-old for writing such, but I’m not sure I forgive AFC for giving it an imprimatur. I hope Ng’s musical horizons widen and deepen as he matures. However, should he continue in this vein, I have no doubt that in 10 years his music will effectively pitch automobiles, or perhaps lead troops.

The usually rock-solid Criers did not have their best stuff on this afternoon. The Scarlatti sinfonia started off with some smeary details; the Rossini’s heaviness stood at odds with its almost evanescent material. In the slow movement of the Scarlatti, the strings nearly completely covered Simon Martyn-Ellis’s lute improvisations and truncated Byron Schenkman’s harpsichord work: only the opening flourish could be heard. Intonation was often uneven. By the time we reached the Porpora, everything finally settled into place, but the best music had already gone by.

Comments Off on Neapolitan of Modest Graces