Philipp A. Stäudlin gave a faculty recital of new saxophone and piano pieces with pianist Yoko Hagino Sunday at Seully Hall, Boston Conservatory at Berklee. Of the seven works for various saxophones and piano, five were composed for Stäudlin by Boston-area composers. This show nearly mirrored one Stäudlin recently gave at Tufts University, where he also teaches saxophone.

Andrew List’s Night Fantasy offered depth and intrigue as the opener. In a style very reminiscent of this reviewer’s own compositional voice, List brought the alto saxophone through its paces in a virtuosic yet thickly textured sound world, pushing the tritone as the primary intervallic voice while being free and whimsical. List said that it was supposed to be a musical fantasy based on colors and timbres that Stäudlin could play, and was it ever! The fantasy employed a wide variety of which are hard to pull off in rapid succession, such as long chains of slap tonguing. Stäudlin powered through exceedingly difficult material like he was practicing scales. List concluded somewhat abruptly.

In its original version for ocarina and piano Eyes of Sorrow by Thomas Stumpf sought to be a lyrical melody with accompaniment. This reviewer found that statement to be deceptive, as the composition was both lyrical and angular. In fact, the line between solo and accompaniment blurred, as the piano and alto saxophone traded the lead voice readily and quickly. If that’s a new concept of lyricism, it definitely is an interesting one. Stäudlin made it seem less like an Anton Webern-esque pointillistic network and more like a compound melody, gracefully covering the divides in octaves through the jumpy melodic material. Stumpf described the performance as emotionally jabbing; this reviewer would concur; somehow the sounds filled in the notes’ lyrical gaps.

The only solo work of the evening, John McDonald’s Unreachable for soprano saxophone unfolded as dichotomy of stasis that lasted as long as the human breath; its high energy activity developed in ABA ternary form. A soliloquy of a troubled man trying to eke out an answer in both calm and panic, according to McDonald noted this concept in his notes but Unreachable did not need an explanation. Stäudlin showed his soprano prowess here, making a rather brutish and ornery instrument sing, yet the instrument’s high tessitura at points became deafening, causing many in the audience to cover their ears.

French composer Philippe Leroux’s SPP for soprano saxophone and piano accompaniment packed every possible extended technique it could into a small-time frame around European post-minimalist, almost Louis Andriessen-like compositional methods. There were quarter tones, glissandi, and slap tonguing passages all throughout. Interestingly, the saxophone pulled out the sound of the piano, as the instruments paired in higher registers quite frequently. In order to achieve the effect, the accompanist had to be aware of how best to interact with a non-standard sound world, and Hagino pulled it off without a hitch, making the piano an extension of the saxophone.

The only work to make use of the tenor saxophone, Marti Epstein’s The Spangled Sea, Calm and Cool almost belonged on another concert. Epstein focused on developing textural passages and bathing the audience in both activity and silence in one bundle. The saxophone acted as texture as Hagino on the piano provided much of the motion when the instruments decided they needed to have some motion. This one was less about the nature of solo and accompaniment and more on the nature of how to develop stasis with tiny bits of movement, a roil on the otherwise calm sea. Despite perhaps lasting a little too long for this reviewer’s tastes, Epstein developed wonderful, colorful bed for action and stasis. 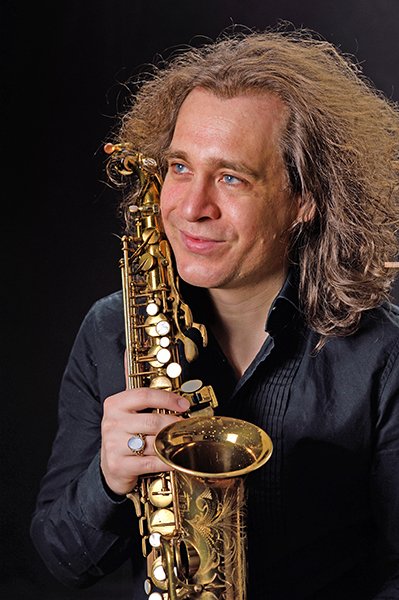 Eun Young Lee premiered her elegy Jindo for alto saxophone and piano, dedicated to the victims of the April 16th, 2014 Jindo island ferry sinking. Lee embedded an otherwise happy folk tune, “Jindo Arirang,” into this slow-burning expression. Stäudlin’s delicacy in this dream-like atmosphere preserved the quiet aura which Lee filled with extended techniques; some minor piano preparations colored the palette, making Jindo stand out. She should be very proud of this touching elegy.

The aptly named finale, Lucie Robert’s 1974 Cadenza for alto saxophone and piano, has a storied history of being a very complicated and demanding. Robert requires the alto saxophone do so much virtuosic playing unprotected by extended techniques that many lesser players can falter. Again, Stäudlin brushed off the difficulty, dispatching this roiling, bubbling melody with great aplomb, ending the recital with tremendous energy.

Stäudlin is easily one of the best, if not the best, classical saxophonist currently in Boston. The man clearly knows what the saxophone is capable of, and the instrument is truly an extension of his voice. [See our review or his Winterreise HERE]. Few players extract the character of the saxophone with as much grace and skill as he does, turning what can be an ornery beast into a troubadour. As the composers who paid tribute to him have attested, people should be lining up around the block to book him and to hear him.

Comments Off on Saxophone Virtuoso Wows