The Aryaloka String Quartet’s “Music of Remembrance” at Temple Shalom in Newton in the Lifetime Learning Sounds of Music Performance Series on Monday contained a subset of the ensemble’s earlier Holocaust Remembrance Day at Winchester’s First Congregational Church.

At an early age, Pavel Haas, a Jew born in Brno Czechoslovakia, came to the attention of Janáček. In the nostalgic, folk-melody-infused “Cart, Driver and Horse” movement of his String Quartet No 2, one hears slurred descending half steps in the upper strings, evoking the pull of a horse-driven cart. A pizzicato three-note motif responds.

Antonín Dvořák encouraged the musical development of Erwin Schulhoff, who was born into a Jewish family in Prague. We heard three out of four movements of the latter’s String Quartet No 1. The directness of the first results from the 16th notes and short repeated motifs that dominate in all voices. Movements two and three evoke a folk dance gone a bit wild with themes starting and stopping, apparently at random. A whole tone scale played in harmonics, in the second section of movement two enhances the exotic atmosphere of the eclectic, yet human and accessible work

Haas perished at Auschwitz and Schulhoff at Wulzburg.

Shostakovich’s String Quartet No. 8 in C Minor, dedicated the work to “the victims of fascism and the war,” was the concert’s focal point. Containing numerous references to Shostakovich’s previous compositions, it is also said to be autobiographical. It opens with the DSCH motif (the German equivalent of D, E flat, C, B) Shostakovich’s reference to himself (Dmitri SCHostakovich).  The motif, in different forms and variations, permeates it. 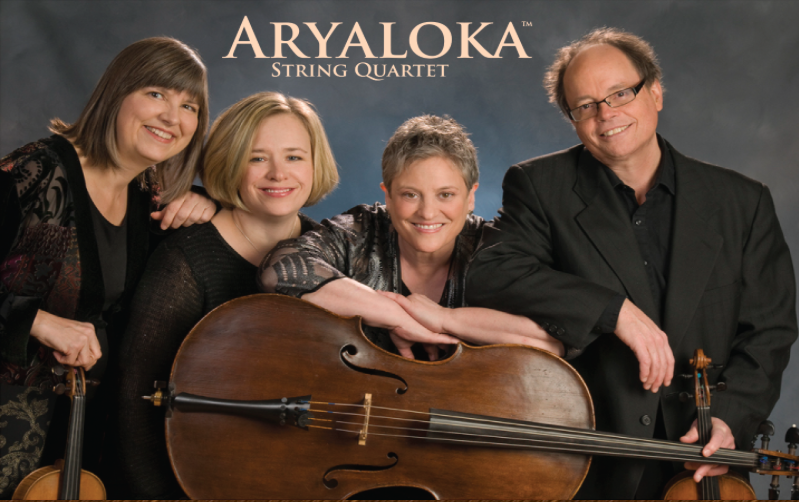 Harmonic ambiguity is also a feature. Movement one takes us through several statements of the DSCH motif before the key of C minor is established. And the beauty of the DSCH motif is that it provides access to several different keys, both major and minor. The second movement quotes the Jewish theme from Shostakovich’s second piano trio. In a thoughtful, but restive third movement, the composer quotes his own first Cello Concerto. Some rays of light appear in the fourth movement where the most unambiguous allusions to major keys (A and E) appear, and where melodic sweetness makes its only appearance. The final movement, as elegiac as the first, returns to C minor.

The members of the Aryaloka (Mark Latham, Beth Welty violins, Noralee Walker, viola and Sandi Jo-Malmon, cello) reveled in the challenges they confronted, delivering a conversation in which the demands of the music dictated which instrument was the driving force at any given instant, or whether the instantaneous kinetic energy (i.e. opening of the Schulhoff) propelled the entire ensemble.

In his book on 20th-century music, “The Rest is Noise,” Alex Ross states that the Holocaust destroyed “entire schools of musical composition.” On this day, the Aryaloka somehow mitigated a cultural calamity of that era.

Comments Off on Honoring the Command To Remember