Thunderous applause from a standing audience Saturday evening responded to the final sounds of this season’s Music for Peace concert series at Harvard Epworth Church. Chamber Music Boston’s programming and superb playing married to an important cause at the 1890s Richardson Romanesque Church as cerulean light filled the altar window at sunset.

Massachusetts Peace Action executive director Cole Harrison welcomed us by describing the organization, which aims “to foster a more just and peaceful US foreign policy,” and series music director and pianist Victor Rosenbaum provided an amuse bouche. The concert itself began with three of Max Bruch’s Eight Pieces for Clarinet, Cello (or Viola) and Piano (the first, second and sixth—Andante, Allegro con moto, and Nachtgesang: Andante con moto). Bruch wrote these late in his life (1908, age 70), for his son, who was a superb clarinetist; some find the works to be overly autumnal, although the three featured were anything but. The highly expressive clarinetist Jonathan Cohler collaborates and records frequently with poetic pianist, Rasa Vitkauskaite; cellist Sebastian Bäverstam brought his unique sensitivity and spirit.

Cohler introduced Beethoven’s Trio in B-flat Major, Opus 11 (1798), written in an era of piano duels in which the aristocracy doted on improvisations; in this case, each nobleman sponsored a musician. Cohler reminded the audience of the famous contest in which Beethoven’s inspirationally pointed improvisations bested Daniel Steibelt, who left in a huff and never returned to Vienna. The B-flat trio may be played with clarinet in lieu of violin (as this evening), and bassoon may substitute for cello (not this evening). The third movement features theme and nine variations based on the popular melody “Pria ch’io l’impegno.” Vitkauskaite’s wonderfully melodic touch anchored the trio, while Cohler and Bäverstam projected verve and warmth.

The second part of the program involved pre-concert heroics, fitting for the ironic references to war in both Stravinsky’s Suite from L’Histoire du Soldat and Bartók’s Contrasts. The ensemble’s violinist, Solomiya Ivakhiv, had to withdraw from the program a week before the performance, and finding a replacement to play the difficult pieces initially appeared hopeless in this busy concert season. Fortunately, the eminent Boston area violinist James Buswell, who was in South America and scheduled to return on the concert date, happily agreed within minutes of getting an email about the predicament. He landed at Logan in the early afternoon, rehearsed right away and, veteran artist that he is, dispatched the works with aplomb and panache. 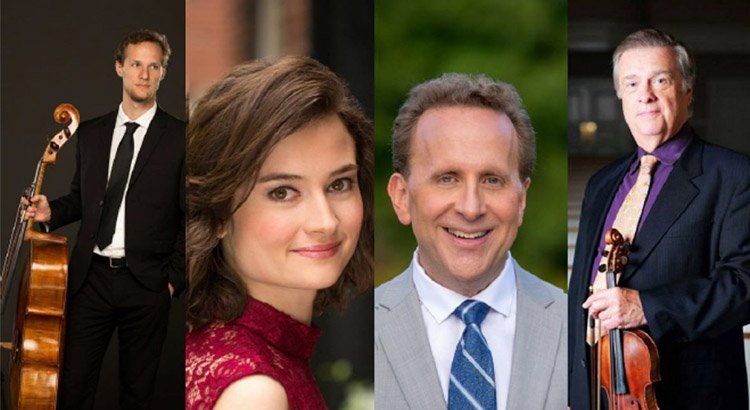 L’Histoire du Soldat, based on the Russian folktale Runaway Soldier and the Devil, may be performed with various combinations of instruments (a septet or fewer) and with and without three actors and one to three dancers. This evening Cohler, Buswell, and Vitkauskaite executed the shifting time signatures and musical ironies to perfectly match the story.

Written in the period before World War II, Bartók’s Contrasts premiered in its first version in 1939 at Carnegie Hall, the first and last movements, and then in 1940, the composer added the middle movement for himself to play along with Josef Szigeti and Benny Goodman. Cohler, Buswell, and Vitkauskaite brought great vitality in their reprise of the work. The first movement Recruiting Dance (Verbunkos) conjures conscription and marching with a clarinet cadenza, which Cohler deftly delivered. The added second movement, Pihenö (or Relaxation), provided a quiet but latently explosive interlude, not really relaxation. The final movement, Sebes (Fast Dance) is a tour de force involving scordatura, which Buswell approached by deploying a second violin with the E string lowered and the G string raised by a semitone.

Next year’s series should go on your “to do” list.

Lapsed pianist and Cantabrigian Julie R. Ingelfinger is a professor of pediatrics at Harvard Medical School and deputy editor at the New England Journal of Medicine.

Comments Off on Setting Sun and Glorious Chamber Music