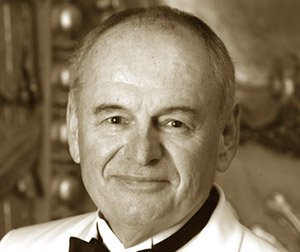 One of the great figures in American choral music, John Oliver, died Wednesday April 11th after a long illness. He founded the Tanglewood Festival Chorus, the chorus of the Boston Symphony Orchestra, in 1970 and led it until his retirement in 2015.

Before the formation of the TFC, the BSO had worked with a variety of local groups for performances of choral–orchestral repertoire. This had long been a problem for the summer season at Tanglewood, when college and community-based choruses in Boston were out of season and thus unavailable, and it was difficult to build an adequate chorus out in the Berkshires.

Oliver, who had been a graduate student of Lorna Cooke deVaron at the New England Conservatory, became connected with the BSO by training a children’s chorus for Wozzeck and the Mahler Third under Leinsdorf in the 1960s. When he proposed creating a Boston-based chorus for Tanglewood, the idea was accepted for the 1970 season. Originally a group of about 60, it was supplemented by other choruses for each Tanglewood concert weekend.

I was an original member and remember the excitement we all felt at being a part of a group that learned quickly and sang with precision and vibrancy. John showed brilliance at training the chorus in vocal technique as well as musicianship. And it wasn’t long before the group’s size expanded to be able to take on concerts without needing to join with other choruses, and its assignment expanded to cover the regular Boston season as well as Tanglewood. (In fact, the TFC’s first public outing was at Symphony Hall, as part of a Beethoven Ninth led by Leonard Bernstein in April of 1970, which was a last-minute change of conductor, program, and chorus due to William Steinberg’s illness.)

John’s belief that a group of good singers, using healthy technique, could make a beautiful and unified sound without modifying each singer’s innate vocalism constituted a significant feature of his method. In Boston, and probably elsewhere, prejudice persisted against choral singing among trained singers (and their voice teachers), who feared being strait-jacketed into an unnatural singing style in the name of ensemble “blend.” TFC became a home for many singers who didn’t believe they’d be comfortable in other choruses.

In the early years of TFC, John was known for his detailed instructions about cutoffs, breaths, phrasing, and dynamics. As time went on, and the ensemble developed a “house style,” such markings became less necessary as we all learned to listen to each other and use our own musical instincts.

Another hallmark of the Tanglewood Festival Chorus became singing from memory (“off-book”), which began with a staged opera, continued to the frequently-performed Beethoven Ninth, and eventually became the norm for almost everything. Most BSO conductors who worked with TFC for the first time started with surprise, then a bit of trepidation (because without scores the chorus could be more reliant on the conductor for cues and instructions), and finally pleasure as they found they had a great deal of control and flexibility with everyone’s eyes on the podium.

The chorus and John developed close relationships with the BSO’s Music Directors and regular guest conductors. Maestros like Eugene Ormandy and Rafael Frühbeck de Burgos enjoyed frequent visits to John’s home in the Berkshires, where his carefully-tended gardens provided fresh produce for his gourmet cooking.

Chorus members and alumni have been sharing memories and John’s “sayings” on social media since his death, and everyone has encouraged me to quote from their comments. Here’s one statement from John Oliver himself that summarizes his evolution and that of the Tanglewood Festival Chorus: “Of course I am a different performer from who I was 20 years ago. In the beginning, I was interested in precision more than in anything else; precision is a fault of youth. By now, habits of precision are built into the work of the chorus, and I have a much bigger vocabulary to use in asking for colors, textures, atmospheres, different ways to phrase. These things are more important than precision, and they can help lead us into what the music means, what it is about. In our very best performances, I feel, we transcend choral singing and become more like a Lieder singer exploring the union of poetry and music.”

Long-time TFC soprano Jeni Munson Cameron wrote: “I wasn’t sure I wanted to even sing again after my grad school experience. I walked into the open audition call on a whim and was thrilled to get a call back to sing for him. That first summer at Tanglewood reset my musical compass, and I owe it all to him.… John brought together the most fascinating group of people whose common denominator was a fierce love of music. Some of us had degrees, some were music professionals, some were students, and some had little or no training but a voice and heart required to make music speak. I don’t know what made John pick one singer over another, but he ultimately formed more than a chorus. He built a community.”

Another aspect of the TFC’s work that Boston audiences may not be aware of is the annual Friday-evening “Prelude” concerts that the chorus has presented since the beginning. These give the group an opportunity to explore a cappella repertoire, and these concerts have also included collaborations with small groups of BSO and Tanglewood Music Center instrumentalists.

There were a number of occasions when John Oliver conducted concerts with the Boston Symphony and the TFC, beginning with a St. Matthew Passion at Tanglewood in 1985 when Seiji Ozawa injured himself during the intermission and John had to conduct the second part. Later that year, he led a run of the B minor Mass when Seiji Ozawa had to rush to Japan for a family emergency. Donald Martino’s The White Island was premiered under John’s direction in 1987. And memorably, he took over for an ailing Kurt Masur during the rehearsal process for the Beethoven Missa Solemnis in March of 2012, leading the performances in Symphony Hall and at Carnegie Hall.

John Oliver also headed the vocal and choral program at the Tanglewood Music Center, taking responsibility for auditioning young singers for Phyllis Curtin’s training program as well as for other activities of the TMC. Some of the singers he “discovered” in that role include Cheryl Studer and Stephanie Blythe.

For two decades beginning in 1977, John Oliver also led the John Oliver Chorale, a smaller chorus dedicated largely to 20th-century music as well as to the great masterpieces of the literature. The Chorale performed and recorded the complete choral works of Elliott Carter; the composer (then 89 years old) came to Boston for the public concert in May of 1997 and sent John new edits for an early piece that he had never heard performed. The Chorale also made something of a specialty of Frank Martin, presenting several of his rarely-heard large works like the Requiem and Pilate. (The TFC sang one of the first American performances of Martin’s Mass for Double Choir a cappella in one of its early Tanglewood Prelude concerts.)

Even before the formation of TFC, John Oliver led the choral program at MIT and taught music courses as a member of the faculty. Many singers who began as student choristers at MIT later joined the Tanglewood Festival Chorus.