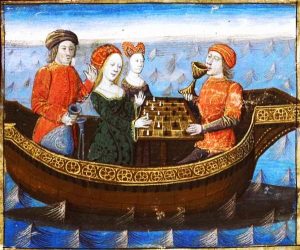 The mythical couple emerges from the misty past next week at Longy in Boston Camerata’s “Tristan & Iseult: A Medieval Romance in Poetry and Music.” This iteration of the ancient love story, drawn entirely from authentic medieval sources, proposes a powerful and surprising rendition of the tale for modern audiences. The internationally acclaimed scenario and score by director emeritus Joel Cohen will be newly staged by artistic director Anne Azéma, who will also reprise her award-winning role as Iseult la Blonde.

Pickman Hall resounds with these tone on April 21st at 8pm and April 22nd at 4pm. Tickets are $10-$60 and may be purchased HERE.

BMInt: Your Tristan & Iseult is, to put it mildly, an unusual artifact. As we understand the history of this show, you were both immersed it from day one. So what was day one?

Joel Cohen: It was a 20th-century morning in the Marais of Paris, at a meeting with the A and R head, in the offices of Erato Records. This guy, who was a 19th century symphony-concerto-opera maven all the way, asked me if there was a way to make a Tristan and Iseult CD using medieval music instead of Wagner’s. Without a clue as to what we would be getting into over the next year, I said yes, or perhaps oui.

Anne Azéma: I remember Joel coming back from the meeting and asking me, “What do you and I know about Tristan?” In a way, each time we give this production another run, and each time we revise it, we are re-asking ourselves that basic question.

Joel: We plunged right in, working on a scenario and a musical program for about a year before there was a note of musical sound recorded. Those were the golden days of the recording industry; the record company paid for research time and covered expenses way ahead of the contract with Camerata. Sometimes the intense activity brought frustration, as we reached out in a number of directions. I remember consulting with a world-famous French medieval historian, seeking advice and support for the project. He looked into the distance, and said he wasn’t much interested in music. Hmm, that particular effort wasn’t so fruitful.

Anne: But there were a lot more pleasures than disappointments. Most scholars and resource people we asked were delighted to pitch in. A couple of major French music festivals helped us along the way. Joel and I amassed an impressive library of medieval texts in French, German, Norwegian, and Provençal recounting the Tristan legend, in all its florid and incredible variants. And we located a manuscript in the Vienna National library that not only told one version of the story, but also included a series of songs, with musical notation, for and about the characters.

Joel: We got a little drunk on the Tristan story. It’s obsessively, weirdly beautiful to begin with, way beyond anything Freud could have dreamed up. We were thrilled to encounter it this multi-dimensional way.

What do you mean by weird? Isn’t it a fairly straightforward love triangle?

Joel: Perhaps so, in the final analysis. But there are so many kinks along the way. Do you know that Iseult’s mother is named Iseult? That Brangane has sex with King Mark on Iseult’s wedding night? That Iseult cheats God in the ordeal scene, and has him “twisting in the wind,” as the narration goes. That Tristan woes and marries yet another Iseult, but never sleeps with her? That this final Iseult, jealous and vengeful, is the one who betrays Tristan and causes his death?  This density, this psychodrama, all makes the ins and outs of the special prosecutor’s investigation look simple and transparent.

So your production is complicated?

Do we understand that this is the original, true version of the legend?

Joel: Truth is multiple. There is a plethora of medieval sources for the story, and so many rich details and variants. Maybe our next “Tristan” will be a video series, with thirty episodes, à la “The Queen!” For this production we selected and sculpted the core elements, as did medieval poets and minstrels all across Europe. Just about every line of poetry, and every melody, comes from an authentic medieval book or manuscript. The result is nonetheless a modern mosaic, and we hope it is experienced by the audience as art for today!

Anne, Joel’s “Tristan” production is by now a generation old. How are you shaping or re-shaping it for the present moment?

Anne: We’ll be moving back and forth between a concert and a kind of dream theater, with very sparse staging. I take inspiration from the art of medieval illumination, in which just a few gestures manage to suggest a world of feeling. As a stage director, I believe it’s important to let each hearer/viewer allow his or her own imagination to work, rather than to manufacture some overly-detailed picture-book illustration. People who saw and enjoyed our “Daniel” play, or the “Night’s Tale,” will recognize this approach . And so there are no costumes per se, and we forgo the effort to create a neo-medieval “look.”

Rather, we use instrumental sounds to evoke a distant time and place. The fiddle, the gittern, and the harp are like voices, speaking without words. The instrumentalists by and large create their own material, just as instrumental music was mainly improvised back then; they support and enrich the vocal narration, supplying crucial energy to the production.

As for the narration, very faithful to the original sources, this time we are doing it in English, weird passages and all, and it will be Joel’s main performance task. Like Ariadne’s thread, it links everything together; and the character of the most important narrative poet, Gottfried von Strassburg, is reflected in the inflection of the story, with moments of passion and pathos, but also in places with an acerbic and anti-sentimental “edge,” far from smudgy Romanticism. The sensibility is quite contemporary. Peter Torpey’s lighting, sometimes discreet, and sometimes enveloping, underscores this approach.

We also welcome to our “Tristan” the young professionals-in-training of Longy School, who will act as a kind of Greek chorus, serving as a bridge between the public and the protagonists. Longy’s continued presence in Boston Camerata productions is part of my long-term collaborative vision involving these two institutions – but perhaps that’s the subject of another interview!

Joel: To sum up, it’s an eternal story, and one never comes to the end of it. Each time we revisit “Tristan,” we hope we have brought something new to it and out of it, and especially now with Anne’s unique kind of music-theater vision.

Comments Off on Tristan and Iseult Entangle at Longy