Beyond the Boston Symphony Orchestra’s benefits (tangible, musical, spiritual) to the 1.2 million people who attended its concerts in the past year, the organization’s activities led to $261 million in “economic impact” in our Commonwealth. An analysis the BSO commissioned from Williams College economics professor Stephen Shepard shows the impact to have grown 40% over a similar study 10 years ago.

Shepard credits the rise to a 13% increase in the BSO’s operating budget (this after factoring in inflation) and a significant increase in visitor spending, particularly at Tanglewood, where, since 2008, the number of visitors has increased by 11% and their average spending by 51%. It also adds approximately $4.5 million the BSO spent for the Boston Pops Fourth of July beginning in 2017.

The Symphony’s activities, including 327 concerts and 340 tour performances, lectures, educational, and other events on average each year, generate a live audience exceeding 1.2 million annually. To put these figures in a larger context, after adding the annual attendance of 1.1 million of BSO neighbor the MFA to the BSO’s 1.2 million, you approach the level of the 2.9 million tickets sales of the Red Sox for last year. Of course, the BSO and the MFA don’t sell as much beer.

Over year 2008 figures, BSO patrons from outside of Massachusetts numbering 270,475 have generated $45 million in additional economic activity within the Commonwealth. Furthermore, the Boston Symphony Orchestra Inc. contributes 2,385 jobs to the state’s labor force in a variety of sectors, generating more than $94.4 million in labor income within the state and at least $48 million in federal, state, and local tax revenues. 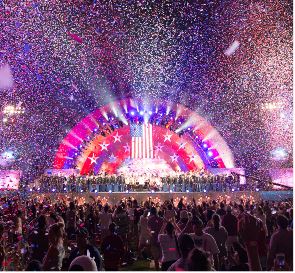 With assets of $560 million and an operating budget of just under $100 million, the BSO takes fifth place among Boston nonprofits. In first place, Combined Jewish Philanthropies shows assets of $1.2 billion and revenues of $432 million. The MFA ranks second (1.2 billion in assets, $151 million in revenues), and WGBH places third with assets totaling $589 million and revenues of $190 million. Naturally, the economic impact from those other entities is also considerable.

Shepard concludes that much of the increase in revenue and activity reflects recovery from the great recession and continued growth in Massachusetts tourism. “The Commonwealth is very fortunate to have the BSO here as a major force in the local economy.”

The findings of the economic impact report are summarized HERE. A link to the full report is at the conclusion.

The Boston Symphony Orchestra’s 10-year period of institutional growth is robust and gratifying on so many levels according to Managing Director Mark Volpe.