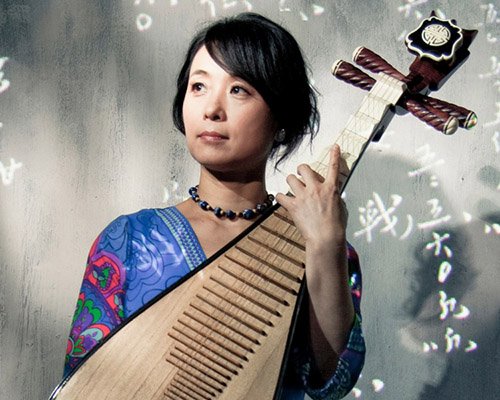 Happily, once again, Celebrity Series of Boston had us exploring our globe’s music. Sadly, NEC’s Jordan Hall was far from being filled for this informative, cultural, and aesthetic event.

Over the hour and one-half program without intermission, Wu Man and the Huayin Band displayed fascinating contrasts.  Acting as emcee, Wu Man apprised us of the Band’s members being farmer-musicians from North China, not professionals in the usual sense of the word. While they dressed down suggesting a rural scene, she dressed up, though a bit on the informal side.

The Band oozed openness, waving to the audience. They were fired up much of the time as witnessed by ensemble shout-outs and shout-singing, in addition to good measures of percussion. Among these were gongs, cymbals, and bench. This last instrument was struck with a block to produce a loud—very loud—clack. During their entire stage-time, the Band enacted joyous rambunctious. Often the Chinese trumpet blasted horse-like imitations.

By contrast, Wu Man’s highly refined pipa was in evidence everywhere in her solos. Wu Man succeeded in achieving a comfortable alliance with the audience. This was done mostly through her introducing the music, its history, its instruments, its stories. Yet at the same time, detectable was a slight air of aloofness, the air of an artist well aware of her own extraordinary accomplishments and bountiful accolades from all around the world.

The wooden four-stringed pear-shaped pipa has shared a kinship of 2,000 years with its earlier prototype, the Middle Eastern lute, or oud. Wu Man described taped plastic picks on each of her five fingers on the right hand as looking “weird.” Fingernails do not hold up on steel strings, which replaced silk strings sometime back in the 60s. She demonstrated the tremolo that employs all five fingers.

That is how a note is sustained on the pipa, much the same as on the guitar, where sound decays quickly. As to steel strings? They are louder. Because of that, however, the frequently employed tremolo, mostly loud and incessant, came close to causing ear fatigue.

Looking past this, there was myriad distinction in tonal display, reflective bends, caressed vibrato, and the like, characteristic of “lyrical” style. Wu Man’s opening number, in this lyrical style, described sunset. She followed with another solo, “Ambush from Ten Sides.” In this “martial” style, which Wu Man also called “showoff,” she proceeded in her own words to “show off with hard strums, military incisiveness at times verging on brutality. All of that and more could she amazingly summon from the pipa.

The highlight of the afternoon had to be the two shadow puppetry scenes. Intricacy of puppet construction and movement synced with earsplitting cymbals, gongs, and drums in an absolutely action-packed battle scene. As they fought, shadow warriors mounted and dismounted their steeds, flashing to and fro across a bulb-lit screen. Wu Man accompanied the second scene, an encounter with two humans and two tigers, next with two humans joining with the first humans. What was happening we were not told. For the accompaniment, Wu Man improvised an eloquent solo, demonstrating delicacy involving a main melody with auxiliary lines interwoven.

Comments Off on Pipa, Puppetry: Eloquence and Folkishness