In a major musical event signaling the start of the Christian Holy Week, Handel+Haydn Society orchestra and chorus delivered in impressive Baroque style in Johann Sebastian Bach’s B-Minor Mass at Symphony Hall on Friday and Sunday.

On Sunday afternoon I witnessed artistic director Harry Christophers conduct with his usual verve, as the nearly full house sat immersed in Bach’s genius for two and one-half hours (including intermission). The effect overwhelmed us. Giving this sprawling compilation its own momentum while also pacing the material for modern ears, he carefully left breathing space after each of the 25 sections—many of them virtually stand-alone works with familiar airs from Bach’s voluminous oeuvre. Scholars see the Mass as a synthesis of all he had learned as a musician throughout his long life.

Christophers said in a video that this “incredibly complex work” is a daunting challenge for his singers and instrumentalists alike. “For me, it’s part of Bach’s legacy for us to revel in today.” Bach completed the masterwork just a year before he died, never having heard the work in its entirety. It is frequently performed and recorded today for its musical depth and its historical sweep. The four “books,” or major parts, comprise a collection of monuments to all his major Baroque contribution— fugue, advanced counterpoint, dance-like passages, cantatas, vocal and instrumental solos, and massive choral works (some in six or eight parts) that interplay with the orchestra’s strings and brass.

In one stunning contrast in the Symbolum Nicenum (Nicene Creed), the morose Chorus ‘Crucifixus’ abruptly shifts mood and tempo into the joyous ‘Resurrexit’ Chorus, reflecting Scripture’s chronology in both Lutheran and Catholic doctrine.

The printed notes invite the audience to listen for a “profusion of embellishments and melodic figures that turn and leap”. The Mass structure seems to arc over the patchwork of disparate elements. Christophers, an expressive, sinuous conductor, was able to adapt his podium approach to mirror each style. Holding all these moving parts together is a feat of synchronicity that seemed easily within his reach. 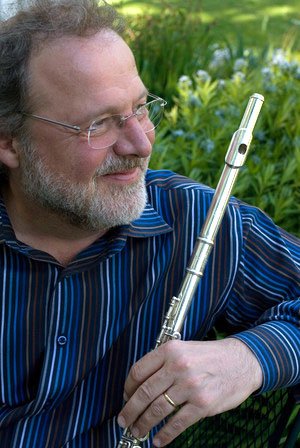 Many of the soloists merit singling out. Soprano Sarah Yanovitch and Steven Caldicott Wilson blended their rich, rounded voices particularly well in their duet in part one, the Missa. Later in the same part, mezzo-soprano Clare McNamara showed her power in the Aria. The lovely tenor voice of Steven Reed, backed by the flute of Christopher Krueger, produced a memorable Aria in the Osanna.

The concert had opened with the annual Collaborative Youth Chorus, singing the Gloria from Mozart’s Coronation Mass K. 317 along with H+H players. Students from Boston Latin School, Falmouth, Lunenberg, Wellesley high schools and Lynn English High School combined their voices in the choir.

Flautist Kreuger was honored prior to the concert for his 40 years of H+H collaboration that culminated Sunday with his retirement. Tributes from colleagues, reproduced in the program notes, praised his “grace and calm under pressure” and called him a “warm and friendly soul.” The Mass gave him several opportunities for solo turns.