What is it, historians and critics have wondered, a play with music, vaudeville, Singspiel, beggars’ opera, cabaret, a mix of jazz and German dance music? Moments of vaudeville, a touch of jazz, episodes of  slapstick, and a good heaping of what we know as opera, not to mention minimalism, abounded in Boston Lyric Opera’s Threepenny Opera.

The company advertised, “In keeping with its roots as a piece of theater, and because it was composed to be sung by performers from a wide range of musical backgrounds, BLO will present The Threepenny Opera without supertitles.” And how much of BLO’s known proclivity for recasting what is old with what is new would spring up at its Friday opening night at the Huntington Avenue Theater?

We heard an English translation by long-time Village Voice drama critic, Michael Feingold. The 11-player, 21-instrument band under BLO Conductor David Angus and the translation hewed closer than we expected to the Brecht-Weill original.

Though a bit bawdy, nothing in this production directed by James Darrah shocked or surprised, certainly not by today’s standards, or in the way it outraged middle class morality in its premiere. The F-bomb brought only a single titter from among the packed housed. At first, action on the stage mostly stood still, steam—not steaminess— gradually picking up as BLO headed toward intermission. After that, both performers and the Friday evening throng came alive.

Despite the warmish brownish set by Julia Noulin-Mérat, coolness persisted. The non-place-specific walls stretched to the stage’s upper limits. The concept reminded this writer of the famous Peter Brook production of Persecution and Assassination of Jean-Paul Marat involving inmates instead of the poor.

Pablo Santiago’s minimalist lighting whose shifting geometric streams projected down from those upper limits created an icey layer of symbolism which may have belied the Brechtian theater of earthiness.

Surely a highpoint of the BLO production came from Costumer Charles Neumann, who said of his work: “The color palette is intentionally muted and absent of high levels of saturation. The clothing is tinged and dusted with dirt and grime…” Semi-clad prostitutes he had dressed in white.

But mostly BLO only flirted with the dismissive, the down and dirty. We missed a decadent class-conscious snarl.

Baritone Christopher Burchett who starred in the role of murderer/pimp Macheath, (Mack the Knife), appeared with 20s spats but sported hair cut high on the head that may have carried a modern military meaning. His command of the Brecht/Weil speech-singing felt idiomatic. He found effective expression in his encounters with Chief of Police, Tiger Brown, played by baritone Daniel Belcher who uncovered a natural character. However, the two dived too deeply into broad capers. 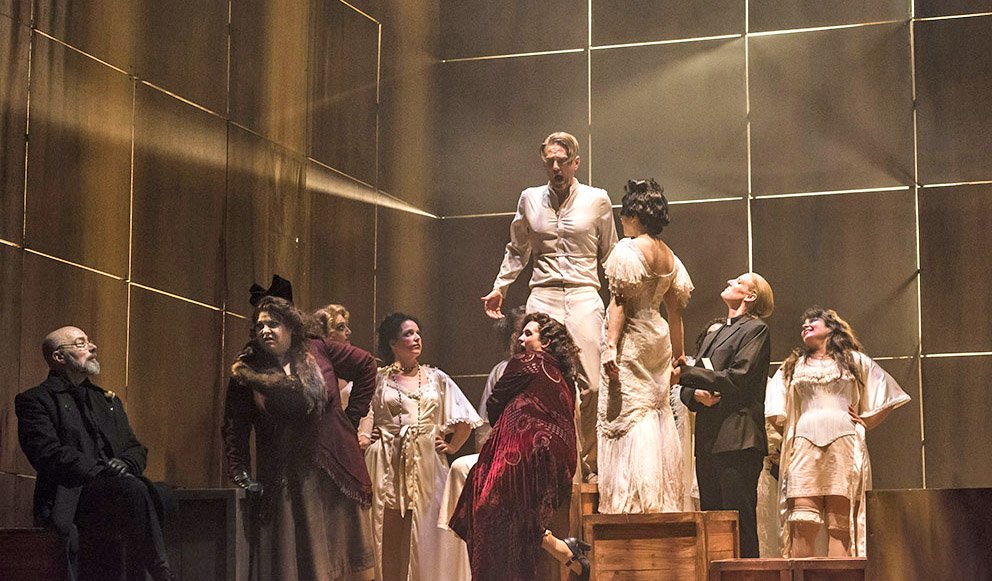 Mr. Peachum’s preachments from James Maddalena steadily echoed courtly voices more like those from the Amadeus movie than from Pabst’s 1931 Threepenny film [HERE]. Mrs. Peachum’s mothering from Michelle Trainor may have come the closest of any of the cast to the talkies and cabaret elocution so yearned for here. She may even have hinted at Cindy Lauper’s own ways with Weill.

Soprano Kelly Kaduce, as Polly Peachum, adventured out of that ideal type of singing thought of as operatic and that made for engaging listening. Her stagey zeal, though, like Trainor’s, could have some rolling their eyes.

Two weekends of three performances each remain on the docket.