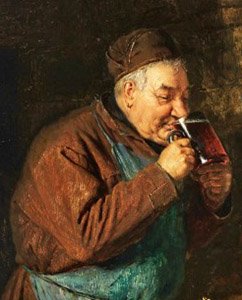 We’ve witnessed Beethoven’s Fifth amongst hops bags and experienced solemn solo celloing in the shadows of giant fermentation tanks; at various times, Aeronaut Brewery, Short Path Distillery, and  Slumbrew have all presented what could be called concert music. Next week we expect to run a feature on Boston Opera Collaborative’s April run of La Bohème at Turtle Swamp Brewing.

Since we’ve been around this bend already, we can offer relevant expert opinions.  Those wanting to exercise caution before witnessing the mixing of these liquid and more ephemeral arts should first check out several BMInt brew-music reviews:  How To Play the Cactus, Beethoven Walks into Somerville Bar, Bach Power to the Pub People, and Classical Music and Suds.

But those inclined not to wait to hear more offbeat classical music while drinking a specialty craft beer should consider Original Gravity’s “Neon Dreams: The Electro-Classical Music of David Ibbett” at Dorchester Brewing Company on next Thursday at 7:30pm. Ibbett’s works roam musingly, according to his publicist, and some may notice their toes are tapping while they “groove to his exciting rhythmic complexities.” An on top of all that the brewmeister promises a one-night-only release inspired by Ibbett’s music.

David Ibbett is a Boston-local composer by way of England. His works have been on OG’s programs before (always well-received!), but this is the first time they’ve focused an entire concert on his work. He has found musical inspiration in many places — songs, symphonies, pop, classical and the electronic — and bringing these strands together is his ultimate aim. The son of a scientist, he co-directs the Music of Reality performance series with pianist Sophia Vastek.

While many groups have begun to pursue alternative and nontraditional venues, Original Gravity, in its fourth season, focuses on a strong tether between the artistic and artisanal, working predominantly with breweries, who listen to the composer’s oeuvre and make a one-night only beer inspired by the works themselves. Audience patrons can buy the beer at the show and experience the intentional collaborative synæsthesia for themselves. The craft beer industry and patrons have been very receptive to new, moderately challenging works in this taproom environment, so we really do bring together disparate worlds, educating each about the others’ form of art.

Artistic Director Keith Kirchoff’s love of contemporary performance and composition were only matched by his fascination with homebrewing. In a desire to meld the two passions, he came up with Original Gravity. Kirchoff is a pianist, composer, and the Vice President of the Society for Electro Acoustic Music in the United States (SEAMUS). Specializing on works which combine interactive electronics with solo piano, his Electro Acoustic Piano tour has been presented in six countries. Keith is also an accomplished homebrewer and beer connoisseur, having traveled extensively in the US and abroad in search of the perfect pint.

Comments Off on Brewing the Electro-Classical Music of David Ibbett