The music of Johann Sebastian Bach, born on March 21, 1685, unquestionably stands at the high-water mark of the Lutheran musical tradition [or any other tradition for that matter]. Every year on a Saturday near Bach’s birthday, The First Lutheran Church of Boston celebrates this musical giant and his myriad contributions to music, both sacred and secular, with the Boston Bach Birthday. Begun in 2009, this exciting event consists of a day-long celebration of Bach and his music.

This year’s event on Saturday, March 17th, celebrates Bach’s 333rd birthday, exemplified this year in the convenient acronym: BBB CCCXXXIII. Apart from the German lunch and balcony seating ($15 and $20 respectively at the door), admission is free to the entire day (though donations are gratefully accepted), and patrons are welcome to come and go as they please.

This year’s slate of programs centers around the 10:15 drama. Traditionally there is an event geared towards children at about this time in the day, and this year Boston AGO subdean Louise Mundinger has written a drama entitled “Waiting for Cousin Sebastian” starring Bach’s wife Anna Magdalena and cousin Johann Elias, and taking place in the Bach household in Leipzig in 1739. Youth pro Musica: the Greater Boston Youth Chorus will serve as the many children in the Bach household, singing and playing several pieces from the Anna Magdalena Bach Notebook. Elias Bach will function as a “master of ceremonies” for the entire day’s worth of events, tying the day together as everybody waits for Johann Sebastian to return from inspecting the Trost organ in Altenburg.

Speaking of the organ, First Lutheran Church is known within the Boston musical scene as home to the world-class Richards, Fowkes & Co. organ. The only organ in the Boston area built uncompromisingly in the North German Baroque style, it renders the music of Bach and Baroque composers with the sounds they themselves heard. Organists and organ aficionados come to Boston from all corners of the globe to experience what is known colloquially as “Boston’s Bach Organ.” The Boston Bach Birthday traditionally features this significant organ in several programs, and this year it will be heard in three solo programs. At 8am, Colin Lynch (Associate Organist, Trinity Church in the City of Boston) will play music by Bach, his cousin Johann Christoph, and his mentor Dieterich Buxtehude. At 3pm, Arvid Gast, a renowned German organist who presides over the historic 1637 Stellwagen organ at St. Jakobi in Lübeck, will play music of Bach. And at 4:15, Heather Kirkconnell (Grace Episcopal Church, Newton) will present music of Bach, including Lenten chorale preludes and portions of the cantata Gott soll allein mein Herze haben, BWV 169, the latter in collaboration with countertenor Joshua Garvey. Also, during the 1pm event, organist Robert August (First Church in Boston) will play the Organ Sonata in F, Wq 70/3 by Bach’s son Carl Philipp Emanuel.

Lest the day be solely devoted to Bach’s organ music, there are always instrumental concerts. This year cellist Denise Fan will play solo music by Bach, Telemann, and Abel at 9am, and the church’s choral ensemble-in-residence Canto Armonico will sing Bach’s stunning motet Der Geist hilft unser Schwachheit auf at 12:50. Merely ten minutes later at 1pm, a chamber group will present a program of solo and chamber music of Carl Philipp Emanuel Bach. 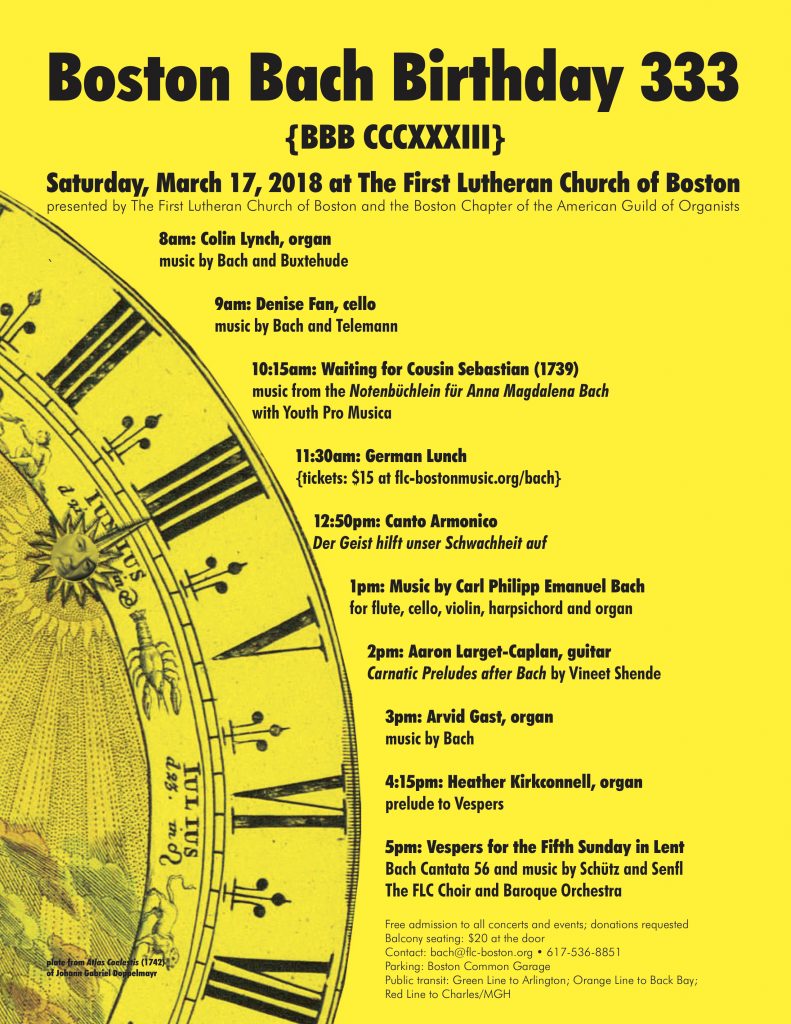 As part of its celebration of Bach’s music, the Boston Bach Birthday provides a unique venue for contemporary musical commentary on Bach’s music, and this year is no exception. At 2pm, Guitarist Aaron Larget-Caplan (University of Massachusetts Boston) presents a program of several preludes and fugues of Bach arranged for guitar combined with three “Carnatic Preludes” by Boston-based composer Vineet Shende inspired by the music of Bach.

An entire day’s worth of concerts naturally leaves one hungry. An authentic German lunch is served at 11:30 in the church undercroft for patrons who wish to take part. The menu varies slightly year to year, but typical fare includes sauerbraten, roast pork, sausages, sauerkraut, spätzel, salad, giant pretzels, and torte. No events will be cross-scheduled with the lunch, so nobody has to miss out on any music. Tickets ($15) are available at the door or HERE.

As is fitting for a celebration of the quintessential Lutheran church musician, who signed all his works “Jesu juva” (Jesus, help) and “Soli Deo gloria” (to God alone be the glory), the day comes to a close with a Lutheran Vespers service modeled after those services Bach himself led at St. Thomas Church in Leipzig in the 1730s and 1740s. This year’s 5pm Vespers service anticipates the Fifth Sunday in Lent the following day, with seasonal motets by Heinrich Schütz and a Magnificat by Ludwig Senfl. Bach’s cantata Ich will den Kreuzstab gerne tragen, BWV 56, sung by baritone Junhan Choi and accompanied by a period orchestra, will beautifully complement the preaching of First Lutheran’s pastor Ingo Dutzmann on the lessons for the Fifth Sunday in Lent.

The Boston Bach Birthday is sponsored by First Lutheran and the Boston chapter of the American Guild of Organists. Details and a flyer are available HERE. The BBB is a beloved Boston tradition—while some patrons stay for the whole day year after year, and some only attend one or two events, all invariably come away musically and spiritually satisfied.

Jonathan Wessler is Minister of Music at The First Lutheran Church of Boston and an organist who trained at Oberlin, Notre Dame, and Eastman. He concertizes throughout America and conducts research in historic Lutheran liturgy.

Comments Off on Papa Bach Reborn Again at FLC