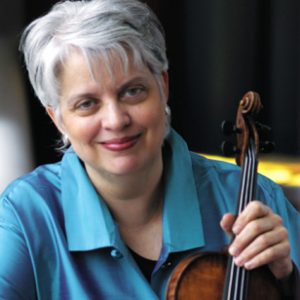 “Searing intensity” characterizes the playing of Indiana University music professor and Dorothy Richard Starling Chair in Violin Jorja Fleezanis according to BMInt in 2011; anyone who witnessed her ordering NEC masterclass students to walk around rhythmically as they played might modulate that description down a step to effective-for-young-artists intensity.

Raised in Detroit, the daughter of Greek immigrants, Fleezanis trained at Interlochen, the Cleveland Institute, and the Cincinnati Conservatory before being offered a seat in the Chicago Symphony Orchestra. Which she quit after one year. Needing “much more polish to reach my goal to sit up front”, she returned to Cincinnati, and within a few years was appointed assistant principal second violin in the San Francisco Symphony by Edo de Waart, even though auditioning with the wrong set list. Soon enough she was associate concertmaster.

SFSO resident artistic adviser and publications director (and former Globe music critic) Michael Steinberg fell for her, as he told friends, when hearing her practice the slow movement of the Sibelius Violin Concerto. They married, and in 1989 moved to the Minnesota Orchestra, where Fleezanis had been named concertmaster, a position she held for the next 20 years. There she introduced lesser-known concertos to concertgoers, including important commissions and premieres.

During her MSO stint and since, Fleezanis has taught and mentored in musical organizations and festivals nationwide, including regular visits to Boston, and has given chamber recitals and made recordings of works from Beethoven to Adams, Tavener, Kernis, and more.

She spoke with BMInt this week by email.

BMInt: You’re not a concertmaster anymore, but chiefly teacher and performer.

JF: Life in the orchestra offered the most stunning example of how large groups of people who do not necessarily know much about one another (nor may ever want to) can galvanize their fine-honed skills to create as close to simultaneous musical expression, even nirvana, as is humanly possible. Having a linchpin position as concertmaster to effect that unanimity, I was fortunate to have deep love for the repertoire and good training in problem-solving when it came to quick-footed measures of changing bowings, reining in a conductor, and ultimately seeking trust in my colleagues to work as one. In my 20 years in Minnesota I grew to have that trust, and to be trusted.

Flash forward to teaching. Now I’m in the mud, shaping like clay those young violinists who have come to study with me for two, three or four years. The unspoken contract is that they will be formed into musically alert, physically aware technicians on their instruments—with no guarantees of how it will turn out. It is a vast psychological shift in the control I have over my work day to day. The upside? The sky’s the limit to how I approach what I say, where the light shines on what each student brings to the table that day, which for a lifer in the orchestra is like going from using tablespoons of my words during a rehearsal to having the spigot on full blast every hour you’re in a lesson! Truth is, I love talking about music, using metaphor and simile, Greek myths, legends, quotations, wild detours of the imagination to ignite the mind in front of me. Which path will work best for this young player compared with the one before: that is where mind, body and soul become the meat of your workbench, to scramble images.

Personally, my role as one of the few women concertmasters made my work ethic the bow of my mental ship, with no room to be concerned with gender differences in a predominately male-dominated world on the podium. Music was the issue at hand and I needed to establish this fact with every conductor and male colleague while onstage and off-. As a result, I had a grand time building rapport with the best about why we were there together, day after day.

So keep the focus on the music.

The centerpiece of my teaching is to build a bond between the composer and the young student in front of me. That leads to ultra respect for understanding how tempo, counterpoint, and rhythmic matters form the spine of each work and give it its character, leading to the examination of style as impacted by period in history, country of composer—in short, the guts, the works’ DNA. The other critical ingredient to my teaching is the singing line, how singers produce cantabile, and how by doing so they inspire expressive engagement using consonants and those luscious vowels to bring us to tears or feel elated.

Not many working musicians have had a musicological scholar and writer as a partner.

As I traveled through my marriage with Michael Steinberg I grew to see the magnitude of his musical knowledge through the ways he chose to reach the largest number of curious music-lovers: his program notes, his public speaking in preconcert settings, those virtuosic “stand up and talk for two hours with minimal notes”, with that informal air he had which made you believe he was there talking just to you. And further for me, his endless listening to music he knew, and did not know, until close to his last breath. I was lucky, blessed to have access to that sort of mind and appetite. His devotion to music was unsurpassed in substance and sheer curiosity to investigate each work, the law of the written score and its creator’s world, like the finest detective—borne out by his frequently saying, paraphrasing his hero Thomas Mann, “it’s all in the details”.

See also longer interviews of this fascinating musician here and here, while masterclass examples are here.