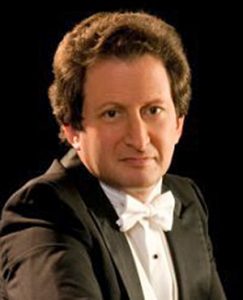 Bach, Beethoven, and Brahms Society’s conductor Steven Lipsitt has occasionally been known to compose. Ten years ago, he celebrated his 10th season leading the Boston Classical Orchestra, by doing that very thing. Breaking a 30-year drought, his Terzettino/Terzettone, a trio-concertino or sinfonia concertante for English horn, bass clarinet, and contrabassoon runs through seven variations on “Soave sia il vento,” the sublime terzettino from Cosi fan tutte.

Ten years later, (March 4th at 3:00) with his new orchestra, he will showcase current principal wind players Barbara LaFitte, David Martins, and Gregory Newton in a reprise of that work. The program’s highlight, though, will likely be Mozart’s Concerto for Flute and Harp, with the BSO’s Elizabeth Rowe and Jessica Zhou. According to Lipsitt, “When I invited them last year to play, I didn’t realize that the BSO Europe tour last summer would feature the piece several times. I believe this is Boston’s first chance to hear them in it.”

The orchestra’s temporary displacement from its home base of Faneuil Hall to Converse Hall (at Tremont Temple) interests us very much. Tremont Temple Baptist Church has its roots in an 1827 edifice where Charles Dickens read “A Christmas Carol” and William Lloyd Garrison delivered the Emancipation Proclamation after Lincoln had just telegraphed it to him. From the beginning, the congregation welcomed those without the means for buying a pew. People of color have always worshiped there, and escaped slaves found sanctuary.

But the Greek revival building seemed quite prone to fire. Therefore, in 1896, Boston’s leading theater architect Clarence Blackall, (think Colonial Theater and the Wang Center, nee Metropolitan Theater) designed the current building with an eye to enlarging the worship and rental spaces. A very imposingly theatrical venue emerged, presided over by a mammoth organ as well as containing a capacious baptismal pool under its stage. For years the Black Nativity performed within, and on at least one occasion, the Boston Early Music Society presented an opera there. Since it possesses more sonic clarity than Faneuil Hall, attendees will be able to experience the orchestra more directly.