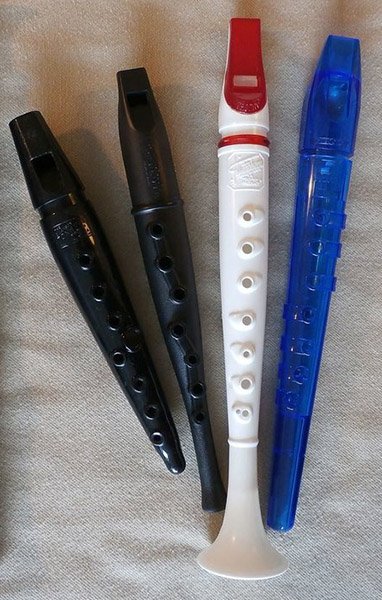 Anyone harboring fond (or not so fond) schoolday memories of tootling or tippling away on a high-pitched plastic (or some Dolmetsch* step-up) recorder might have been astonished at the beauty and variety of instruments heard at Friday night’s concert by the Flanders Recorder Quartet at the First Church, Congregational, in Cambridge. On display were recorders ranging from 7-foot tall “great basses” to altos, descants, and tiny sopraninos in the high treble range. Instruments like these appear in paintings and sculptures as well as in encyclopedias and instruction books from the mid-16th to mid-18th centuries, yet few of them survive in playing condition. Based on realistic depictions in paintings and sculptures and precise illustrations and sometimes even measurements in tutors and theoretical works, the Flanders Quartet has commissioned some 150 Renaissance- and Baroque-style instruments from expert makers around the world, including Boston’s own Friedrich von Huene.

In Friday’s program, the four players — Bart Spanhove, Joris Van Goethem, Tom Beets, and Paul Van Loey, each navigating among instruments of various sizes and  keys — collaborated with soprano Cécile Kempenaers in a group of Renaissance ensemble pieces and consort songs organized around the changing seasons. The opening “Maske,” attributed to Hugh Ashton (ca. 1485-1558) was a lively dance piece with successive — and increasingly complex — variations over a repeated bass pattern. In the two consort songs that followed, the soprano line held the top part, with the remaining parts of the polyphonic complex supplied by tenor and bass recorders. Kempenaers’s light and flexible delivery seemed ideally suited to this type of ensemble texture. References to the return of spring in “This merry pleasant spring” and “When May is in his prime” inspired adroit ornamenting of basically straightforward syllabic settings of the anonymous texts. “Cuckoo,” attributed to Richard Nicholson (1563-1639) took the imitative fancy even further, with Kempenaers joining in the final “cuckoo” cries on a small plastic recorder pulled from her cloak. A popular dance bass pattern served as the ostinato underpinning for the “Ballo Granduca” (The Grand Duke’s Dance), a series of exuberant variations attributed to the Dutch keyboard master Jan Pieterzoon Sweelinck (1562-1621).

An “Autumn” group opened with another set of dance variations, the “Capriccio & Volta du Tambour,” two soprano recorders outdoing one another in breathtaking virtuosity. In yet another time-honored Renaissance tradition, a sequence of solmisation (“do-re-mi”) pitches served as the backbone for variations. The three-part texture of an anonymous keyboard fantasy “Upon La mi re,” attributed to the mid-16th-century organist Thomas Preston, easily lent itself to ensemble performance. Here the solmisation formula was heard throughout as an ostinato in slow canon in the two lower parts, while  the upper part added its own freely-composed counterpoint. “Meditation-Fire” by the young Flemish composer Pieter Campo was based on the 4-note sequence “la-fa-re-mi,” heard throughout as a bass ostinato against increasingly dense variations in four upper parts, a tour de force of contrapuntal and harmonic density. In the second half of the program, gentleman of the Chapel Royal Robert Parsons’s four-part ensemble fantasy “Ut [do] re mi fa sol la” placed the unadorned six-note scale in the upper voice against elaborate contrapuntal play in the lower parts.

Songs by Thomas Campion (1567-1620) and John Dowland (1563-1626) were usually published as lute songs, notated for one voice on a staff with text, and three lower parts in lute tablature; sometimes a viol part reinforcing the bass was included. Alternate ways of rendering these four parts were also common. With Campion’s “The peaceful westerne winde,” Dowland’s sprightly “Can she excuse my wrongs,” and the eloquent “Sorrow come,” Kempenaers and the Flanders Quartet demonstrated just how well the combination of voice and a well-attuned the ensemble of recorders could sound. On a lighter note, a dance tune became a boisterous drinking song in an anonymous piece from one of 16th-century printer Pierre Attaingnant’s publications. Brandishing a wine bottle, Kampenaers kept up a rousing pace as she took up a different voice part on each of the three stanzas and her collaborators stamped their feet. A century earlier, a youthful Henry VIII, an avid musician trained on several instruments, demonstrated his modest skills as a song writer in another drinking song, the three-voice “Pastime with good company.” “Czaldy waldy,” a melody of Czech origin, was played as a dance tune, with sopranino variations over a bass drone and hand drum accompaniment.

The program concluded quietly. Two different arrangements of the anonymous devotional song “Sweet was the song the Virgine soong” were presented, the polyphonic arrangement from the collection of the English amateur Thomas Hamond (d. 1662) enhanced by the Kempenaers’s graceful ornamentation of a simple syllabic setting. In the beautiful 14th-century English carol “Lullay. As I lay on Yoolis Night” that followed, the haunting melody, sometimes doubled at the 5th, soared over a supporting drone in the basses. 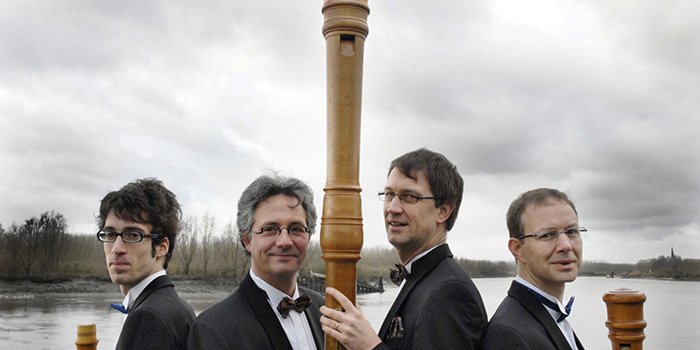 The Flanders Recorder players captivated us with the sheer beauty of their sound, with their inventive programming, and above all with a very high level of ensemble playing. The Quartet has performed together for 30 years and will disband at the end of 2018. They have appeared several times with the Boston Early Music Festival, and this was their Boston farewell. BEMF’s executive director, Kathy Fay, appeared on stage to celebrate and thank the ensemble, and to present them with an appropriate award: a graduated series of “tippling” pitchers! Response came by way of two encores: an (unidentified) ensemble arrangement on an ostinato bass and, to prove the sky’s the limit for the ensemble and their guest singer, an inspired rendition of Glenn Miller’s “Moonlight Serenade.” Who knows how many in the audience will have gone home firmly resolved to take up the recorder?

* In 1919 Arnold Dolmetsch completed one of the first, and certainly the most influential, 20th-century recorder, based on one of his originals (an alto by Bressan, now part of the Dolmetsch Collection housed at the Horniman Museum, Forest Hill, London). The antique instrument had, by that time, been mislaid on Waterloo rail station (April 1919), left behind in the rush to catch a train back to Haslemere after a concert by the family at the Art Worker’s Hall. This loss was the spur for one of the most remarkable acts in the recorder’s revival. Arnold Dolmetsch, now over sixty years old, worked for many months to uncover the recorder’s secrets before producing a working model. Over the following six years he completed the main consort of recorders (descant, treble, tenor and bass) all at low pitch and based on historical originals. This consort featured in the 1926 Haslemere Festival of Early Music. Peter Harlan, visiting an early Festival, purchased a set of recorders from Dolmetsch and, despite being confused by their being at low pitch, commissioned derivatives from German manufacturers and so started the mass recorder movement. And what of the lost recorder? It was purchased at a junk shop and returned to its rightful owner.                         -by Brian Blood from Dolmetsch article HERE

Comments Off on In Flanders Fields Recorders Blow