The Doric Quartet appeared for the first time publicly in the Boston area on Thursday, at Longy’s Pickman Hall as part of the Celebrity Series’ “Debut Series, “a showcase for young artists in the early stages of their careers.” Although the Doric is hardly newly minted, having begun winning competitions for 12 years, their presentation and approach remains youthful and enthusiastic. They have shown a willingness to be adventurous in repertoire, recordeding quartets by Korngold and William Walton, Janáček and Martinů as well as by Schubert and Haydn; they’ve performed John Adams’s Infinite Jest for quartet and orchestra in Vienna and at the Concertgebouw. What they brought to Boston intrigued: Op. 64, No. 6 (Hob. III:64) by Haydn, and the final quartets of both Benjamin Britten and Felix Mendelssohn.

The Dorics at once made clear that they prize smoothness of tone and flexibility of execution above all. They relaxed into Haydn with sensitivity and responsiveness. First violinist Alex Redington’s creamy, elegant sound informed his readings of Haydn’s melodies with eloquence. He played with a subtle, constantly varying rubato: in the opening Allegro the tempo was always gently changing, the expanding and contracting pulse generating momentum and interest without drawing attention to itself. The quartet moved as one. There was little sense that Redington was leading the others, rather, it was as if they were breathing together. The pulse of the music slightly quickened and slackened exactly as one’s pulse does as you take deeper or shallower breaths. They displayed similar ease and deep mutual connection in the outer sections of the Andante, where rising figures passed from player to player: not so seamlessly as to eliminate individual personality, but all of a single, beautiful piece. The Dorics are energetic, thoughtful, but most of all elegant. The tempo of the opening of the Menuetto was fast enough, and the articulation clean enough, to remove any temptation to hear it as rustic. The Finale went by quite fast as well, fast enough to feel virtuosic but without suggesting fireworks. Haydn makes a number of jokes: a fake-you-out bogus recapitulation in the wrong key in the first movement; a combination of sliding grace notes and stratospheric high notes in the trio that sounds like a whistling contest; a sudden half-tempo interlude near the end of the finale. The Dorics executed these with the same polished professionalism as the rest of the work. Every joke landed. The quartet didn’t exactly seem to be in on the jokes, but Haydn’s humor came through anyway. A quartet in complete control of its performance delivered a nearly perfect realization of a work by a composer in complete control of his powers. The Apollonian calm and assurance demonstrated here perhaps explained the quartet’s choice of name, Doric, the earliest, and arguably most graceful, of the Greek architectural orders.

Britten’s Third Quartet exposed some interesting differences in individual’s approaches rarely noticeable in the Haydn. This last major piece Britten completed before he died of heart failure in 1976 is enigmatic. Doric cellist John Myerscough described it as “more of a suite” than a quartet. It is in five movements, each odd in its own way. In the first movement, Duets, the players constantly pair off with each other, and often the two pairs play simultaneously. No one line dominates; the duets themselves often intertwine. The effect is of multiple conversations, all on the same topic, but with no through line. A movement marked Ostinato follows; here the quartet is mostly pointed in the same direction, but the music generated by the brief rising repeated figure changes mood and texture willfully and sometimes confusingly. The emotional center follows in Solo, a long line for first violin with only hazy accompaniment. It is not quite a melody: each cell of intervals has its own beauty, but it neither progresses nor culminates. It is, however, interrupted at the end by a weird, cartoonish ensemble episode filled with dizzy glissandi and grinding sul ponticello from the viola amid a cloud of pizzicato.  A brief, noisy Burlesque leads to the final movement, Recitative and Passacaglia. The Recitative is constructed from fragments from Britten’s final opera, Death in Venice, primarily the undulating music that depicts traveling on the Venice canals, and is spectral and mysterious. The Passacaglia circles around its repeated bass figure, only briefly building to a small climax before dissipating ambiguously. It strangely answers only to its own logic. In its non sequiturs and sudden gestures one can imagine Britten thinking of late Beethoven. I go into this detail because, faced with this strange artifact created by a man at the end of his life, the smooth facade of the Dorics cracked somewhat. Both cellist Myerscough’s boisterousness and second violinist Jonathan Stone’s edginess seemed at odds with Redington, who remained serene and controlled even in the most agitated moments. Violist Hélène Clément appeared to be the foundation of the group, able to be both extrovert and introvert as the demands of her part required. Make no mistake, the Dorics never once lost control of their ensemble, or seemed at odds: but suddenly the hearer noticed a sforzando from Myerscough, or an aggressive internal line from Stone, that suggested that there might be quite intense dynamics beneath the surface.

Their reading of the sixth quartet of Mendelssohn, Op. 80, could perhaps have benefited from letting loose some of these dynamics. Written in response to the devastating death of his sister Fanny of a stroke at the age of 41, and completed shortly before Felix died of the same cause six months later at the age of 48, it conveys his anger and anguish. Beautifully proportioned well-considered, it never caught fire. This music demands more roughness, greater conflict. 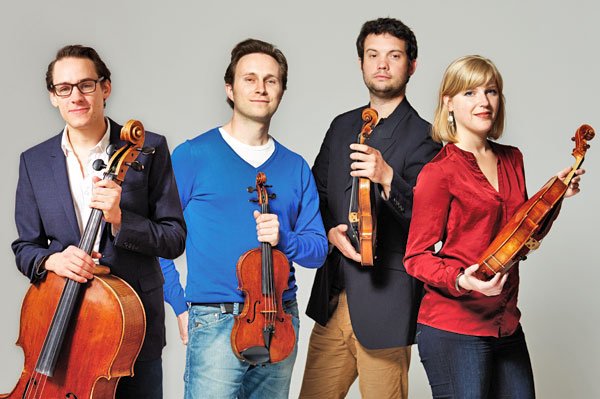 Thankfully, no simple-minded rubric or programmatic theme imposed itself. Beneath the group’s elegance presides keen intelligence, and it was refreshing to be given the opportunity to find connections for ourselves: to notice, for example, how in their hands Haydn’s final movement sounded more “Mendelssohnian” than the Mendelssohn. The outburst that forms the middle of Haydn’s Andante echoed in the oddball moments of the Britten and drew attention to how Mendelssohn struggled to control a composition that is almost all outburst.

The warmly received Dorics encored with Haydn—the slow movement from Op. 64, No. 3, returning to the same warmth and intimate connection with which the evening began. Clearly, in Haydn’s territory they felt most comfortable, but one did not wish away the Britten or the Mendelssohn, even if those challenges were so completely mastered. On the evidence presented on this night, the Doric is an accomplished ensemble with an aesthetic core that nevertheless retains the potential for further evolution and discovery. One looks forward to their return.

A report on the quartet’s private Boston debut is HERE.

Comments Off on Doric’s Accomplished Aesthetic