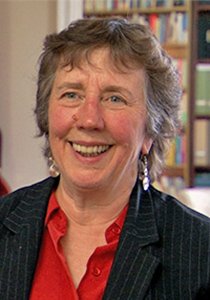 Some weeks ago, the Boston Symphony, having been castigated [HERE] for its lopsided gender balance in repertoire, gave a response both lame and accurate: their audience preferred to hear works from the past, and as few female composers wrote before the modern era, what were they to do? The Boston Modern Orchestra Project, under Gil Rose answered that question repeatedly Friday at Jordan Hall, offering five titles by one of the few women composers an orchestral concertgoer might recognize: Joan Tower.

For a while there in the later part of the 20th century, a classical listener asked to name a woman composer might be forgiven if the only names Tower’s and Ellen Taafe Zwilich came to mind. Today one would be expected to recognize Sofia Gubaidalina as well. Writing new music for symphony orchestra and getting it performed requires threading a difficult needle of cultural and institutional expectations, and Tower has proven exceptionally gifted at doing so.

If there’s a strategy for her success, Friday’s program suggests it involves writing music of moderate length (all of the one-movement pieces clocked between 10 and 15 minutes), in an idiom where traditional relationships of consonance and dissonance predominate, with easily grasped developmental strategies. Hearing an entire Tower evening, one is overwhelmed by the care and craft that goes into every moment. At its best, that craft succeeds in carrying the user from moment to moment to an unexpected destination. In Rising, a concerto for flute and orchestra, a simple ascending fragment saturates it. Its initial evolutions are so clear and transparent that they risk becoming banal; but almost imperceptibly Tower manipulates rhythm and texture to complicate matters. While the flute seems to rise almost effortlessly, like a glider on an updraft, the orchestra often climbs: and occasionally it falls backward, only to push up again. There are two moments of relative rest where a quartet of strings plays a chorale of brief lyric beauty. By the end, the essential nature of the musical material has not changed, and although the ending is definitive, the listener is not left with a sense of resolution. If anything, one feels like Rising has figured out how to state a complex problem, starting from the most basic principles. From moment to moment the attentive listener follows the progress of the music, only to look up at the end to find oneself in a rather more daunting landscape.

However, craft can become its own justification, and the subsequent Rising, Chamber Dance (2006) for orchestra and the bassoon concerto Red Maple (2013) both demonstrated the same professionalism without having as much to say. The swirling textures of Rising and its predilection for scalar patterns manifest themselves in Chamber Dance to such a degree that it felt like a continuation of what we had just heard. They were present also in Red Maple, though to a lesser degree, and in the bassoon piece, they frequently descended. Still much could be admired in both. In Chamber Dance, a concerto grosso with blurry boundaries, action moved between rhythmic tuttis and langorous, free solos and duets. Each finely made episode and each new moment shone like a pearl; each one stood next to the other, similar but independent. In the cannily orchestrated Red Maple, the bassoon never strugged to be heard. Careful use of muting and tessitura made room for soloist, Adrian Morejan, to play over the entire range of the instrument. The sophisticated and quicksilver solo writing —no clowning for the bassoon here—supported Morejan’s smooth, buttery and resonant sound that blended while remaining prominent. But by the end of Red Maple, a certain sameness was becoming apparent: while everything we heard had wonderful moments of careful construction, they struck one as similarly episodic. Sure-footed, confident and always well-considered, it provided few surprises, and although you never doubted Tower’s ability to go from moment to moment, the evolution of the works had little air of inevitability. Conflicts resolved came without a lot of drama.

Surprisingly, that the next item did provide many of these elements. Even more surprising was that it was the second flute concerto on the program, the more prosaically entitled Concerto for Flute. Tower dedicated both Rising and the Concerto to Carol Wincenc, who performed both. It is easy to see why Tower writes for Wincenc, who plays with an effortless and self-effacing intelligence that matches Tower’s own formidable gifts. Twenty years separate the two, the Concerto having been written in 1989, and on the evidence presented here, what control and mastery Tower may have acquired in the interim may have cost her some vitality. Whereas Rising is an extended essay on ascension, the Concerto is a contest, maybe even a fight. Although it opens with long, slow tones, this is an agitated work. The flute is constantly contending with the orchestra, which alternates between cushioning the soloist and pushing back at her. Often the solo flute’s material is immediately echoed back at her, in a gesture midway between affirmation and taunting. At other times, the flute is shadowed by other instruments playing in unison with her – sometimes a second flute, in the orchestra. Is this “singing along” or stalking? In Rising Tower makes much use of Stravinskyian meters that have such smooth edges you might not even notice their asymmetries. In the Concerto, arrhythmias clash and start and stop—gently, perhaps, but the sharpness caught us off-guard here. An audience that had been to that point respectful, but reserved in its response, called Wincenc back for a second curtain call.

The evening ended with one of Tower’s Greatest Hits—not Fanfare for an Uncommon Woman, but the equally tendentiously titled Made in America, written in 2004 for a huge consortium of small American orchestras. American the Beautiful haunts it. Again, Tower shows her compositional prowess by “disguising” the presence of the tune, which is always indirectly stated but in such a way that you couldn’t possibly miss it. Leonard Slatkin’s recording of it won three Grammys, which is perhaps an index of its accessibility as well as of its anodyne nature. I would rather have had a chance to hear the Concerto a second time. As usual, the Gil Rose and BMOP orchestra played as though it had been playing this repertoire its entire life.

It wasn’t fair to Tianyi Wang (b. 1992), the winner of the BMOP/NEC Composition Competition, to place his winning work, Under the Dome, at the beginning of a concert otherwise dedicated to Tower. Born in Changchung in northeast China to intellectual parents who grew up during the Cultural Revolution, Wang came to Boston for a year when he was 13 when he mother came to EAC on a Fulbright grant, and got his Master’s at Longy before coming to NEC, where he studies composition with John Mallia and Stratis Minakakis. He wrote Under the Dome as “an elegy to the victims of smog, to the ever-forgotten dust behind the wheels of endlessly rushing history.” This refers specifically to the recurring environmental catastrophes in China. “Sound Poem” is filled with tension and foreboding. Its greatest virtues are the young composer’s sure hand with the sound of the orchestra and his ability to create and sustain a brooding atmosphere with a variety of techniques. He brackets the orchestral from start and end by notated breathing, a haunting sound that had more to do with the program of the pieces than with the music that it surrounded. Promising, earnest, intense and callow at the same time, it might have benefited by being presented with other pieces with similar motivations and techniques—perhaps like works scheduled for BMOP’s “A Thousand Mountains, A Million Streams” in April, which will feature new music from Chinese composers. While Rose and the orchestra did well by the young composer, Under the Dome couldn’t help but feel like an afterthought, even though it came first on the program.