For several decades, string quartets have popped up like mushrooms after a rainstorm, nurtured by institutions such as NEC (and similarly by others, like Juilliard and Indiana University, at both of which the Verona has been resident). Music festivals all over the world host string quartet residencies, to which all these aspiring troupes troop. So how do you tell one from another? It’s a tribute to the attainments of individual musicians and their teachers that quality of execution is pretty much no longer an issue. The differentiators lie, we think, in point of view, and the communication of particular insights to the music that let audiences hear something they hadn’t known before (and, to beat a drum we’ve beaten before, by expanding audience awareness of repertoire they hadn’t been exposed to before, not just by creating new music but by rummaging through the vast attic of wonderful scores gathering dust). With that in mind, let’s see how Verona measured up.

The overall plan was what we’d call a “classic”: Haydn, Shostakovich and Brahms, 18th, 19th and 20th century masterpieces of the accepted canon. OK, no points for that but it’s “essential” repertoire (which may be a kinder way of saying “inside the box”). Within those constraints, they chose well. They began with Haydn’s String Quartet No. 36 in B-flat Majot, op. 50 No. 1, the first of the “Prussian” quartets dedicated to King Frederick William II of Prussia, who was a talented amateur cellist (for extra credit: who was the most recent head of state or government to qualify as a concert-quality classical musician?). Written in 1787, some say in response to Mozart’s “Haydn” quartets of 1785, this set is less performed than those before and after, for reasons we can’t quite figure out but sometimes attributed to their more “learned” and complicated construction. In his introduction to the 2016 London Haydn Quartet recording, Richard Wigmore observes that “there is little of Mozart’s vocally inspired lyricism and harmonic sensuousness in Op 50. This is, supremely, music about music: rigorously, obsessively argued, delighting in making much of little, not least in the quartets’ quizzical and/or unstable opening gestures.” Indeed, No. 1 opens with an obsessive eight repeated B-flats in the cello that, far from being an introduction, serve as an essential component to a monothematic movement that scours its materials in all manner of combinations. Similarly, the other movements mine their materials to great depth (the minuet even referring to the theme of the slow movement, which is actually one of Haydn’s best tunes). This is music to be savored and cherished.

Verona gave us an exercise in lightning-speed dexterity. Those B-flats should be dashes, not dots, even in cut time. We may be just too slow-witted to have heard properly, but it sounded like they omitted some repeats in their 21-minute traversal (25-7 is more normal). Sure, it’s great that they can get their fingers around all those passages, and it’s gratifying that Dormond can do so brilliantly in the fourth variation in the lyrical slow movement (do we think FritzWillie could have done as well, or that Haydn would have made a king try to?). There was superb dynamic shaping in the marvelously chromatic and literally off-beat minuet (but hey, guys, it’s allegretto, not allegro con fuoco). Flashy fingerwork with brilliant articulation abounded in the bouncy finale, whose false ending caught a few audience members unawares. At a superficial level, this was really exciting, but really one shouldn’t treat Haydn, especially gnarly Haydn, like that. You don’t swallow a truffle in one gulp.

In partial recompense, the concert’s forepart ended with Shostakovich’s Quartet No. 3 in F Major, op. 70. Dating from 1946 (it was the only music he wrote that year), some have seen it as a companion piece to the Ninth Symphony, the antithesis of the expected encomium to the Soviet war effort. It did mark a turning point in Shostakovich’s quartet writing, following a clear trajectory from light into darkness with a very mysterious, unsettling finale. That this was a very personal expression from the composer is clear from this recollection of a rehearsal Shostakovich attended by Fyodor Druzhinin of the Beethoven Quartet, as recounted in Elizabeth Wilson’s Shostakovich biography: “Only once did we see Shostakovich visibly moved by his own music. We were rehearsing his Third Quartet. He’d promised to stop us when he had any remarks to make. Dmitri Dmitriyevich sat in an armchair with the score opened out. But after each movement ended he just waved us on, saying, ‘Keep playing!’ So we performed the whole quartet. When we finished playing he sat quite still in silence like a wounded bird, tears streaming down his face. This was the only time that I saw Shostakovich so open and defenseless.”  Sadly, this sense of personal anguish was lost on Rojansky, who had prefaced with a recitation of the “program” for the quartet derived from movement subtitles relating it to historical factors surrounding the war, a take that has been generally discredited by modern scholars. Anyone who has read recent literature on Shostakovich knows that public programs like this were alien to his chamber music, fairy tales the composer made up to keep the authorities off his back (indeed, the persecutions of artists leading to the Zhdanov Decree in 1948 had already begun). Shostakovich ditched the movement subtitles immediately after the first public performance, and then withdrew the piece until after the storm had passed.

Fortunately, the Verona’s reading was un-marred by any misunderstanding of what the work was “about.” The light opening movement displayed excellent dynamics in aid of phrasing, plus fine contrapuntal line delineation. The two “scherzos” that followed, the first queasy and the second vicious, had them digging into the notes, with an impressive group glissando and eerie saltando playing in the first and violent pizzicato in the second. In the soulful slow movement, a passacaglia (Shostakovich was great at passacaglias, using them brilliantly for staged intensification), Ong produced a mournful elegance. This movement ends, and the attached finale begins, with the viola and cello, to which Rojansky and Dormond contributed a hushed magnificence. That finale is an emotional roller-coaster, with moping counterpoint and sudden transitions of mood (and a recollection of the passacaglia theme) to end on a kind of questioning but frozen acceptance. While the psychological and affective meaning may be elusive to describe, the players let its expression directly out to ponder in one’s heart. 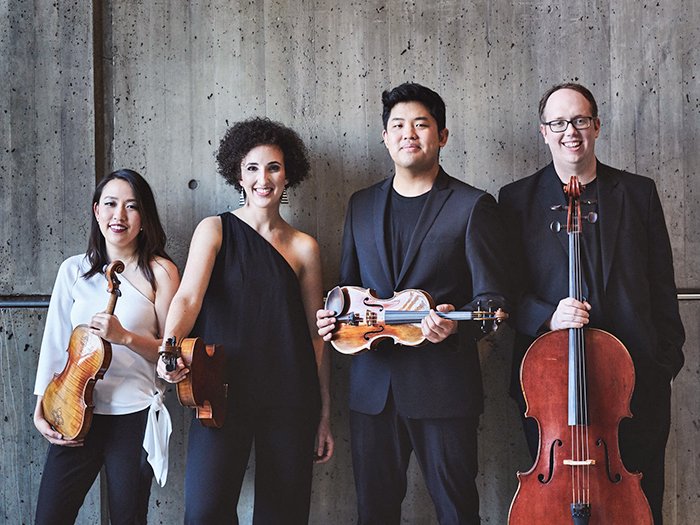 Writing string quartets to his quality standards was at least as hard for Brahms as writing symphonies. He didn’t finish the first draft of the two op. 51 quartets until 1869, and the final product took four more years. Even so, and despite the fact that the  No. 2 in A Minor, op. 51, no. 2, is the more lyrical of the two, they are more respected than loved, even among devotees of Brahms chamber music (us among them). It’s thus a bit of a hard sell. We’d say that Verona got halfway to a sale, notably in the inner movements, where they really mastered the Brahms sound. Ong was again outstanding in putting out the ineffable sweetness of Brahmsian lyricism, with perfect phrase endings, and the others contributed warmth and coziness in turn. The scherzoid third movement is an interesting one in the Brahms œuvre, a kind of enchanted-forest piece that the Verona handled admirably, the outer sections spooky and the trio elfin. In fairness Brahms is partly to blame for the more problematic outer movements. Despite its beautifully lyrical and echt-Wienerisch second theme, it’s hard to know where the first movement is going, and it was clear that the Verona hadn’t come up with a detailed roadmap either. The finale is said to be a csárdás, but if so it’s a rather abstract one, without the hot paprikás that informs the finale of his G minor piano quartet or the middle section of the slow movement of the clarinet quintet. Again, although they kicked up a great deal of energy at times, the Verona didn’t know quite what to make of it.

So, bottom line, this highly talented quartet, with chops aplenty, needs to learn better how to teach its audiences something about the music, by playing it without resort to doubtful historical exegesis.

Comments Off on NEC Quartet Struts